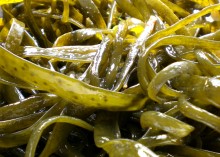 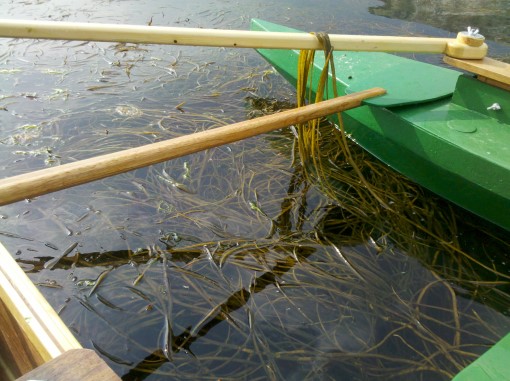 Himanthalia elongata - this olive-green seaweed is found growing from rocks and hard structures towards the lower edge of the tidal zone. The persistent part of the weed consists of disc-like structures on short stalks - looking a bit like mushrooms.

From the centre of these discs grow the elongated, branching straplike reproductive structures, which are likely to be the bit you actually notice. They look like long, greenish bootlaces. 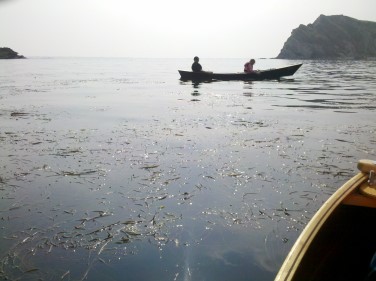 At high tide, the thongweed fronds float thickly at the surface, but of themselves, don't honestly present much risk to unpowered watercraft, because they exude a coating of exceptionally slippery slime

I'm sure they would foul propellers and impeller intakes though - and they could conceal shallowly-submerged rocks. 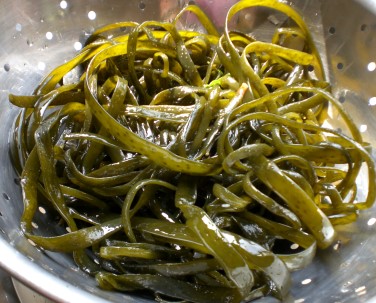 Picking the thongweed was something of a challenge, because it just slips through the hand when pulled and once I had managed to pull some loose, it was quite hard to manhandle the long, slippery strands into a plastic bag.

Once home, I washed the fronds in copious fresh water and removed a few bits of debris and dead parts.

I tried frying a few small pieces in hot oil and although the results were very tasty. this seaweed is too succulent for this treatment and it made the oil spit terribly. 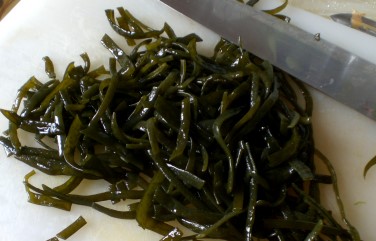 I chopped some of the fronds into pieces one or two inches long.

Doesn't matter how much you wash it, this stuff stays slippery, so there's no easy way to cut it up neatly.

Although it looks like tough old rope, this weed has a quite tender, crunchy texture, which should give it plenty of potential in the kitchen. 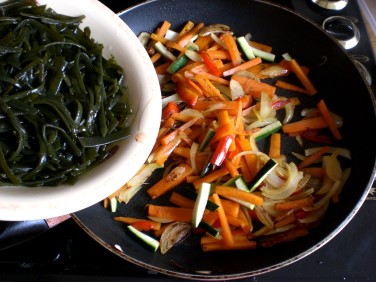 I added the chopped pieces to some fried carrots, onions and red pepper. 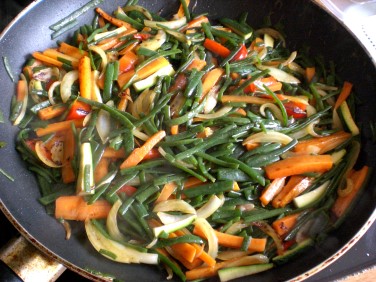 Almost immediately, it turned from olive-drab to a fresh, deep green colour - and remained this way - interesting - because this is exactly the opposite of pretty much any land-based vegetable, which turn too easily from green to khaki when overcooked.

In the pan, it looks almost exactly like chopped French beans. 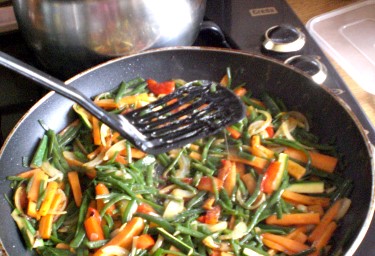 There's a slight aesthetic problem though - you can't readily see it in this picture, but the seaweed fronds continued exuding their slippery slime while they cooked, coating everything else in the pan.

In some cultures, that glutinous, slippery texture would be considered desirable, but it's not high on my list of favourites. I added a tablespoon of wheat flour into the pan and stirred it in to soak up the liquid (this worked pretty well) 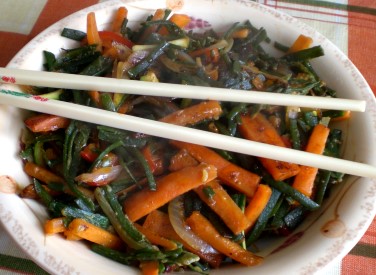 A little soy sauce and chilli oil and the end result was a tasty stir-fry.

The flavour of this seaweed is really surprising - it tastes like shrimp or prawns.

I kid you not - were it not for the obvious vegetable texture, I'd have sworn I was eating some kind of crustacean.

I reckon if this was blended finely with flour and butter, it could be fried into little fake-prawn dumplings. Of course, I intend to try this sometime...

It's often said that all seaweeds growing on British shores are edible. That's not strictly true, because - pollution aside - not all of them are good to eat.

However, as long as it's gathered fresh from clean beaches or waters and washed thoroughly, it's quite safe to attempt to eat any kind of seaweed, especially if it's cooked before consumption. Probably still better to pick something that someone else before you has identified as worthwhile though.

Despite that it's growing in the sea, often in great abundance, the same rules apply here as with any other kind of foraging - take no more than you need (and never take all of anything), and try not to damage things in the process. Have fun!