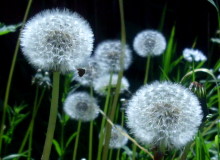 Dandelions are related to sunflowers. Sunflower seeds are grown for their edible oil content.

Dandelions are edible... but do the seeds (much smaller than sunflower seeds) contain usable amounts of oil, and can I extract it?

In order to test this, I'm going to have to collect a lot of dandelion seeds. Fortunately, they're not rare. 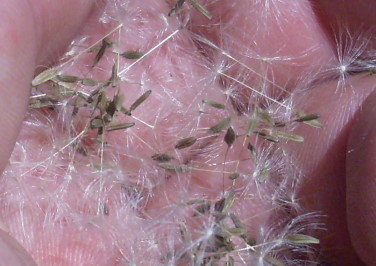 The seeds ought to be easy enough to gather, as the seed heads are big, proud and easy to spot.

However, just grabbing the seeds off a fully-opened dandelion 'clock' results in a fluffy handful of seeds mixed up with their downy parachutes. This could be difficult to separate - although I'll probably try... 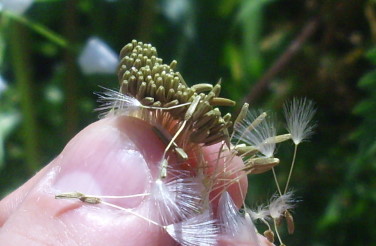 Picking the seeds early or late in the day is more promising - the seed heads are closed and the seeds can be pulled out as a single coherent tuft..

It should be possible to trim these off with scissors straight into a collecting vessel, almost completely eliminating the collection of associated useless debris.

I'm going to collect 100g of dandelion seeds for my experiments, so that's all for now - check back soon for updates... 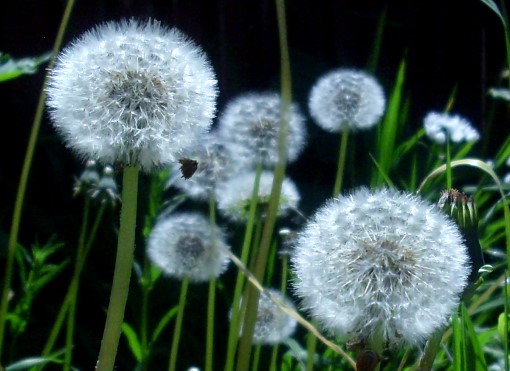 April 2011 - it took a whole year to complete this project, because the main season for dandelions ended just after I started thinking about collecting them for oil. 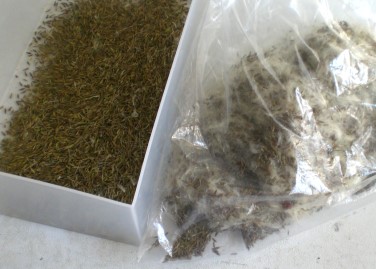 I started collecting seeds - first, by carefully picking bunches of them and trimming the fluff away.

However, I discovered that it was a lot quicker just to pick the seeds straight into a bag - by holding the top closed and crushing and shaking the bag, the seeds came loose from the fluff and collected at the bottom corner.

How To Get The Oil Out

Before I waste any time trying to extract volumes of oil out of the seeds I collect, I'm going to test them - by crushing them and rubbing on paper or bare wood, it should be possible to discern whether they contain meaningful amounts of oil.

After that, I'll try crushing and burning them, which again should help to reveal how oily they are (or are not).

Only after it is thus established that the seeds do contain oil, will I try to extract it in quantity - if it's there though, it should be possible to get it out by crushing the seeds in water and allowing the oil to float up and separate out. 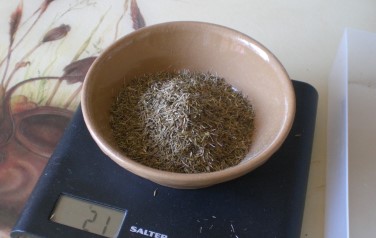 Turns out my target of 100g of seeds was a bit ambitious - about five hundred dandelions later, I had this double handful of seeds, weighing in at 21g.

I tried crushing some seeds between two spoons, then setting them alight, but they popped like corn and went everywhere. 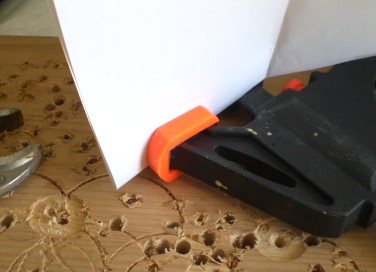 To see if there was any evidence of oil in the seeds, I crushed a few of them in folded paper, using a woodworking clamp... 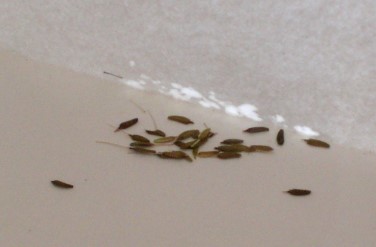 ...and there it is! - the oil from these crushed seeds has made the paper translucent.

I've no idea how to extract any kind of usable amount though - no amount of crushing or grinding them seemed to yield anything. It's in there, but there's not much of it. 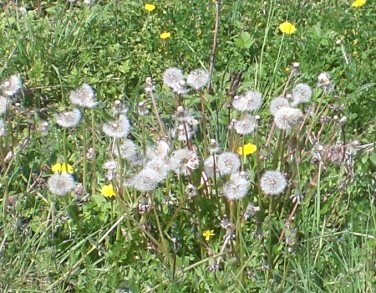 I can't see this being worthwhile. 500+ seed heads yielded 21g of seed, which can't be more than 20% oil by weight - unless the end product has magical properties, it's just too much effort.

I suppose the collection and preparation of the seeds could be made easier - it would probably be possible to make some kind of vacuum collection/threshing device, but it'll still be a tiny yield.

On reflection, I wasn't really satisfied to leave it there, so I went out to collect some more seeds. Grabbing the whole fluffy head by hand and stuffing into a plastic bag is definitely the quickest method - then it's easy just to rub handfuls of it together back at home, causing the seeds to just drop out of the fluff.

I took about 15g of cleaned seeds, added hot water to cover them and atacked them with my hand blender.

Then I drained them and pounded with the end of a wooden rolling pin, then poured on the liquid and blended again. 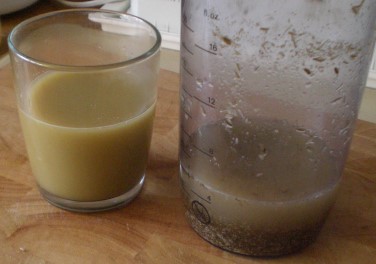 I was hoping for an obvious layer of oil to form on top, but everything seems fairly well emulsified. 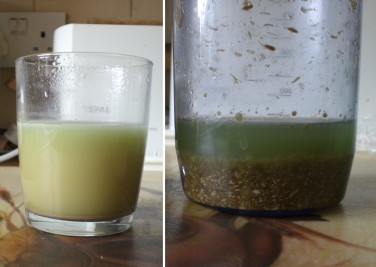 25 April 2011 - well, it's settled out a bit, but there's only a very slight sheen of oil on the top of the liquid. Quite disappointing, but I think there's something in there that's acting as an emulsifier - probably making extraction impossible using water.

I know there's oil in there, but it's presently beyond my means to get it out.

Other Uses For Dandelion Seeds

So I have all these Dandelion seeds left over - I wondered could be sprouted like mustard and cress, for an unusual micro-salad... 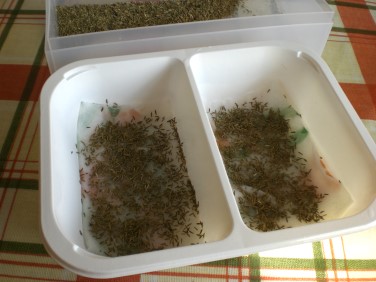 Growing dandelions on purpose seems to me, as a gardener, akin to madness - but I'm not going to let that stand in the way of an interesting experiment, so here goes...

I sowed the seeds fairly thickly onto soaked kitchen paper towels in a plastic container. 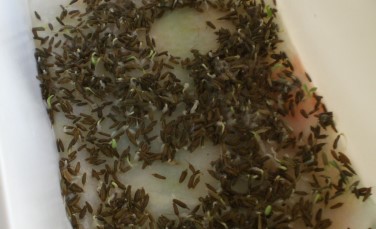 I had wondered if they might not germinate without first being chilled to simulate winter, however, it's probably a fairly reliable general rule that plants producing seed in the early spring are doing so in order for it to germinate and grow throughout the summer.

After two days, my dandelion seeds started to sprout. At this stage, I watered them daily with just a fine trickle from the kitchen tap. 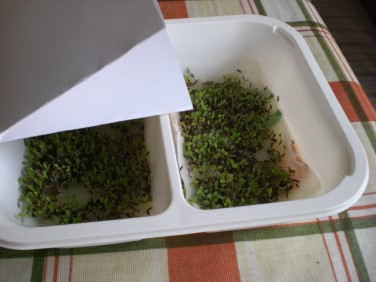 Another two days on and there was a thick carpet of little seedlings. Now that they had rooted into the absorbent paper, I watered them by adding a more generous (although still gentle) stream of water, then pouring off the excess - this helps to keep the growing medium fresh and hygienic..

The plastic container I used was divided into two compartments, so I covered one half with card to exclude some of the light.

At the end of six days, there was a very healthy-looking forest of tiny dandelion plants - still only showing their seed-leaves, and not as tall as cress would be, but this still seems the ideal moment for harvesting. 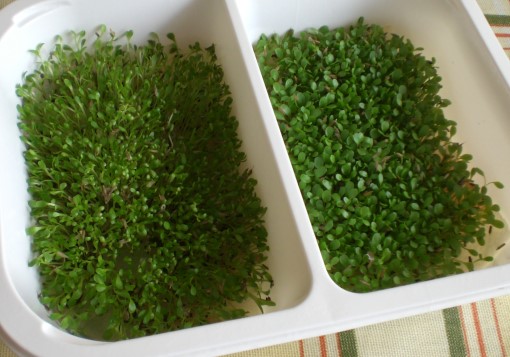 I snipped them over a plate loaded with pieces of toast, topped with crisp fried bacon, then dressed it with a little fruit vinegar, black pepper and a drizzle of the fat from the bacon pan. 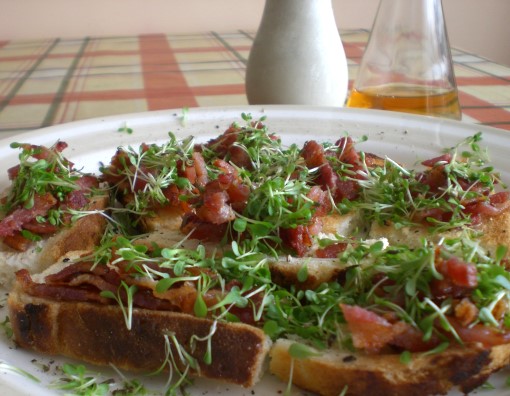 Not bad. Fresh tasting - a bit like the flavour of fresh home grown lettuce, with a very subtle hint of chicory-like bitterness - just enough to offset the sweet-sourness of the vinegar and the salty richness of the bacon. Not much difference between the flavour of either group of plants, although the ones I covered were taller (I expect they might have been sweeter if I had excluded all light.

I declare this interesting, simple-yet-productive experiment a resounding success.

Hi Good article. We extract the oil from sunflowers at school using acetone. Grind the seeds in a pestle / mortar - wash with acetone. Leave to extract for 24 hours.Evaporate the acetone (better still - evaporate / condense) to reuse the acetone.Whe

Congratulations on your successful sprouting. I'll try them now too, but ut I use an easier setup.No expensive 'sprout trays' to buy. Just put the seeds into a glass jar and cover the mouth with a piece of nylon stocking (elastic band holds it on). S

Thanks Merricat - I've grown mung beans that way before but i wonder if it will work well for dandelions - because you end up eating the whole seedling plant including roots. Please do report back with your results if you try it.

This is something that i have also been pondering for a long time... i was really rooting for this experiment to work? A nut seed butter/pesto is the closest i can get to an oily substance from seeds. I also think some seeds are more oly than others.

The link to this page just hit the Raw Food Talk Forum so I'll bet you a lot of people from there will be coming by! WOW! Why didn't we think of this! What a great idea!!!!! Thanks!

awesome! where did you get your dandy seeds?

Nice post! Have you read John Kallas' book on using a vacuum w/a filter to gather the seeds in high quantity? Also, I posted a link to this at PlantForagers (here's my post about it: http://tech.groups.yahoo.com/group/PlantForagers/message/817).Sam Sc

I wonder if there is a need to get rid of the fluff? That seems to be the most laborious part of the process.Presumably in nature they just fall/rot off and because it's only a week there's not enough time for them to start rotting?I've just collected

(Yes, there is a need to get rid of the fluff, it's an absolute nightmare to try and do it without that step)

You can use a lighter to burn off the fluff before you remove the seeds from the stem. works very well and much quicker. If you have a large tight patch the whole path will burn off in one shot.