What Are Wild Radishes?

Raphanus raphanistrum - an untidy, wiry mustard-like plant often found growing on beaches and dunes - especially at the foot of cliffs, sea walls and amongst shingle above the high tide line. 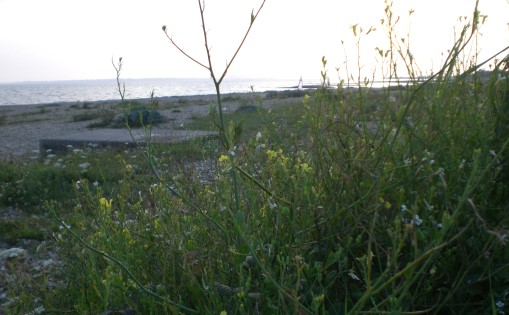 Although most commonly found as a coastal plant, it may be found in areas away from the coast, especially roadsides and waste ground, demolition sites and other disturbed soil. 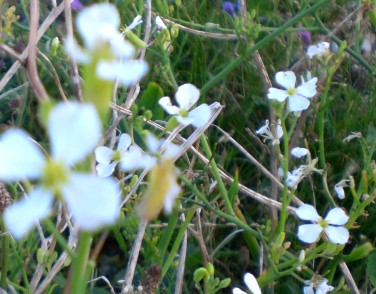 The plant is a member of the family Cruciferae (or Brassicacae) - a relative of cabbages - and is very typical of the family - foliage and stems tending toward bluish green, with four-petalled flowers that may be pale yellow, creamy or brilliant white, sometimes veined with pink or purple. 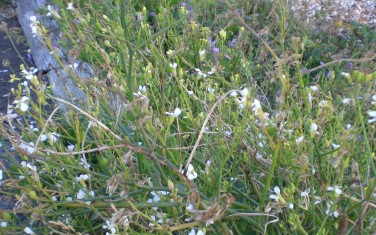 The leaves are often not very noticeable - broader towards the base of the plant, but often obscured by a tangle of branched, upright stems which are not conspicuously leafy.

In spring, when the plant is young and tender, the leaves and flower shoots may be eaten as a green vegetable, but these quickly become tough. Although the plant is related to cultivated radishes, you're unlikely to find edible roots under this plant - they'll almost certainly be tough, woody and twisted. 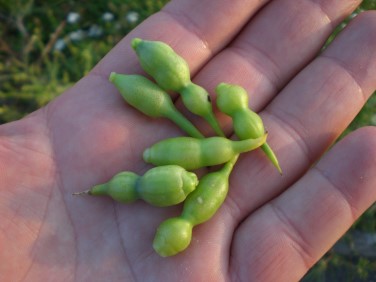 However, the wild radish does have an edible and tasty treat for us. The knobbly, fleshy seed pods - these can be added to stir fries and salads - or just picked and crunched as an interesting wayside nibble.

They're quite variable though - on some plants, they'll be long and knobbly - on others, small and almost spherical. Some tender and others stringy or hollow - so it's worth sampling a few and picking the ones you find best.

The taste is just like that of a well-flavoured garden radish - with a good peppery kick. If, like me, you're often disappointed by radishes that are watery and sweet and totally lacking in bite, you'll like these.