These light macaroons are crisp and golden on the outside, with a chewy, marshmallowy centre. 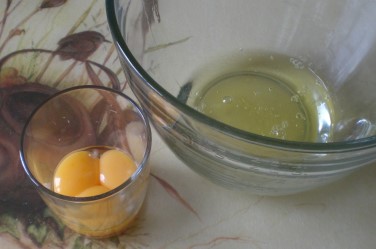 Separate the eggs - this can be done in one of several ways - the simplest is to carefully crack the shell into two neat halves, then pass the yolk repeatedly back and forth between them, deliberately spilling the whites into a bowl below.

Alternatively, specialised egg separating tools are available, or a slotted serving spoon may work (the white passes through the slots, the yolk is caught) 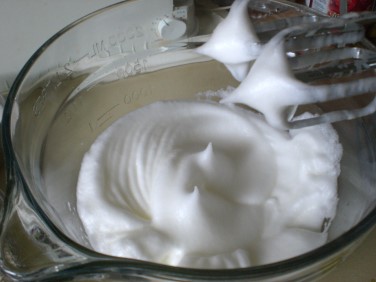 Whisk the whites fast until they are fluffy and just firm enough to stay in place in the bowl when it is tipped up.

Add the sugar and vanilla and whisk again to mix - whisking in the sugar won't cause them to drop (it actually reinforces the bubbles, making it easier to mix in subsequent ingredients) 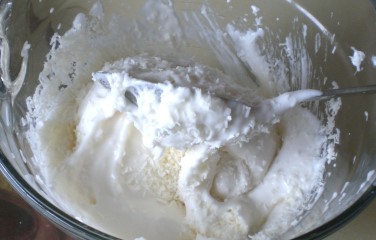 Add the coconut and use a large spoon or spatula to gently fold it into the sweetened whisked egg white.

Use a gentle, broad scooping action and mix only as long as is necessary to get the coconut evenly mixed in. 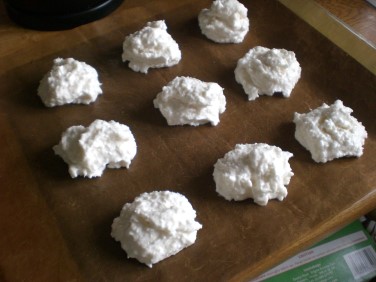 Each one is about 2 tablespoons in size. They will only spread and expand a little during cooking, so there's no need to space them widely.

Bake in the oven for 40 minutes until they are crispy on the outside and pale golden brown. 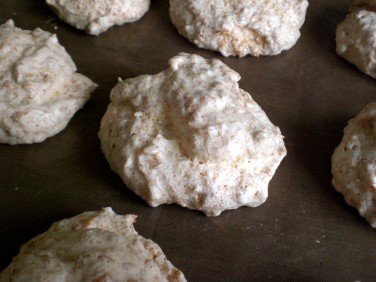 Allow to cool for a few minutes on the tray before transferring to a wire rack to cool completely.

When they're cool, melt the chocolate (can be done in a bowl in a microwave oven - just keep a close eye on it so it doesn't burn), drizzle the melted chocolate over the macaroons, then add half a glacé cherry on top of each one. 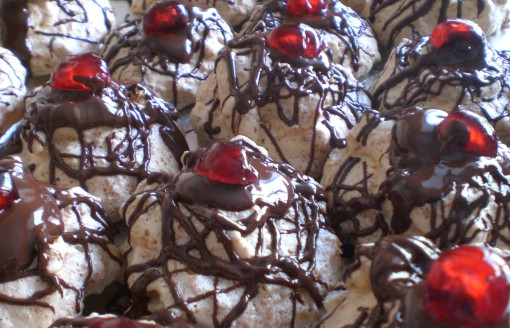 There are many different varieties of macaroons - these are designed to be light with a crispy outside and a chewy, marshmallowy centre.

Arrange the macaroons close together on a plate or tray before adding the chocolate to avoid mess and waste. Spooning the melted chocolate on from a height of about 6 inches allows it to form a thin running strand that can be zigzagged back and forth across the macaroons for a decorative effect.

A final blob of chocolate spooned directly onto the top of each macaroon provides a base to stick on the cherry.