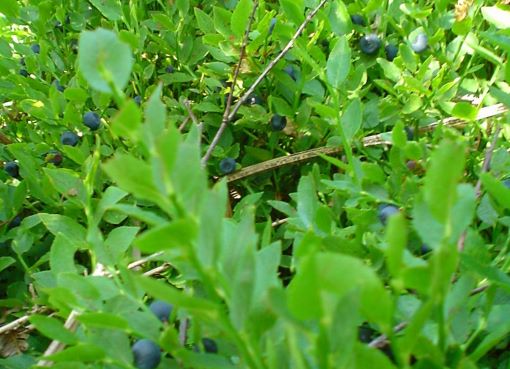 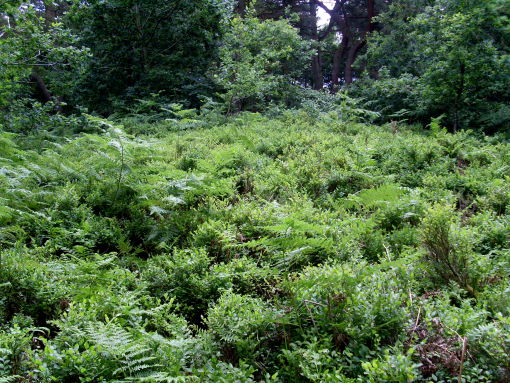 The bilberry plant is Ericaceous - so it is only found on acid soils - on heaths, moors and woodland.

The berries are usually borne on fairly new growth, which is often concentrated mainly at the top of the plant, but because of their branching habit, may in some cases be distributed throughout the whole volume of the bush.

When ripe, the berries are easily picked by hand, although the low growth habit can make prolonged gathering quite tiring on the back.

Considerable variation in fruit proliferation and size may be found within different microclimates in the same general location - for example, a south-facing, sunny slope may bear smaller fruit in large numbers - plants growing in more shady locations may produce fewer, larger fruits - although there are probably genetic factors affecting this too

Blueberries are frequently called a 'super food' - because of the nutrients they contain - this is also true - indeed, more so - of wild bilberries. The dark, staining colour of the juice is attributable to a group of chemicals called anthocyanin pigments - these are powerful antioxidants and are reputed to be beneficial to human health.

The berries also contain vitamins A and C.

Over here, I constructed a berry picker, consisting of a stiff wire comb attached to a cylinder - designed to speed the collection of bilberries. This outing afforded a chance to test it... 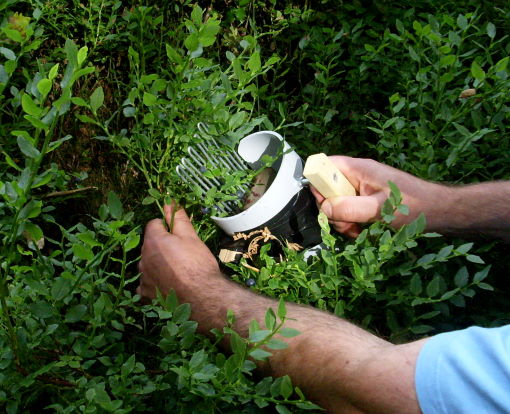 The first thing to say is that the machine performed exactly as expected - the wire comb is scooped up through the top part of the bush and it does indeed collect the berries there, mostly intact. The spacing of the tines was set largely by educated guesswork - the wires are spaced on about 7mm centres, leaving about a 5mm gap between them - which turns out to be pretty much optimal - any closer and the bushed would be stripped of their leaves - any further and some of the berries would just slip through 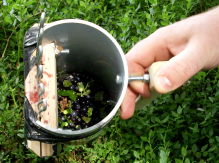 It's not by any means as neat and tidy as hand-picking, but it is easier, and in nearly all cases, I believe it's more efficient.

On bushes with only sparse fruits, it's probably about the same speed as picking by hand, but in those areas where the plants have many fruits, it really comes into its own and may be ten or more times faster than hand picking

We moved into a densely-fruited patch for about the last half hour of our two-hour session - and in this half hour, I was able to pick easily one and a half times as much fruit as in the previous hour and a half - the efficiency of hand-picking does not scale similarly, as it is already largely limited by the speed at which berries can be finger-picked and passed to the collecting container. 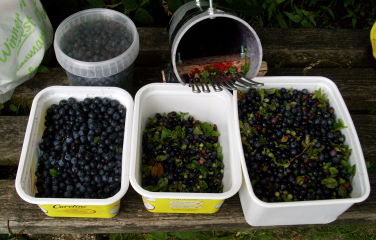 It's not perfect though - the machine does bruise the fruit a little and it collects indiscriminately - so the collection includes leaves, twigs and unripe berries - which need to be sifted out by hand afterwards, but even taking into account this extra time and effort, the fruit weight per unit time is considerably improved with the machine

My wife (who is quite dextrous in picking bilberries) was able to collect 450g of clean fruit (the leftmost container in the above picture) in the two hours.

My haul, after cleaning and picking over (an extra hour's work), was 1100g of cleaned fruit (the middle and rightmost, large containers) - so picking by hand, about 225g per hour is achievable (possibly rising to 300g per hour in a good picking spot) - with the machine, 350g per hour is the baseline, potentially rising to 1kg per hour or more, in well-fruited areas.

If the berries are to be used for juice, wine, jelly or anything else where the pulp will be strained, minimal picking over would be necessary and there is no question that the machine would be vastly more efficient than picking by hand.

In other cases, it's still more efficient, but the main benefit is in maximising the amount of fruit that can be gathered per visit - if you have limited time at the berry patch, but spare time when you get back home, it's great, but for perfectly intact berries, to be eaten raw or used as garnish, hand-picking remains the better method.

Bilberries have a wide range of potential culinary uses - including the obvious ones like pies or jam, but they can also be used to make a sauce for roast meats, baked into cakes or muffins, or of course just eaten fresh with cream, custard or ice cream.

One of my favourite ways to use them is to make a sweet shortcrust pastry case and bake it blind, then put 150g of bilberries in a pan with the juice of one lemon and a couple of tablespoons of sugar, simmering very gently until the berries start to release their juice.

A heaped teaspoon of cornflour mixed into a little water is then briskly stirred in, thickening the juice and the whole lot is poured into the flan case and left to cool. After a few hours, the cornflour will have set the berry and juice filling into a wonderful, velvety jelly - slices of the bilberry tart can be served with creme fraiche or ice cream. 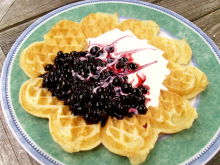 There wasn't time for that today, though, so we just very gently warmed some berries with a little lemon juice and sugar, and served them over waffles with cream. Delicious. 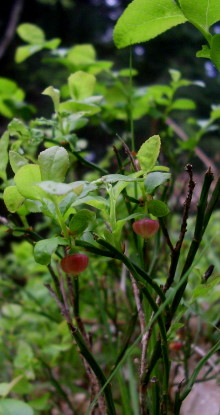 In spring and early summer, it's worth looking out for bilberry plants in flower - this should be a fair indication of the amount of fruit they'll bear later on.

The flowers are little waxy bells, white or pinkish - not always easy to spot from a standing position.