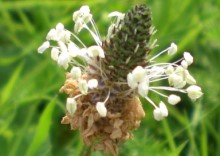 Ribwort Plantain (Plantago lanceolata) is a very common plant of grassy places such as fields, roadsides and gardens. It forms a rosette of strap-like leaves, from which wiry, ridged stalks arise, bearing green/brown cone-like compound flower heads, surrounded by a halo of tiny cream-coloured bracts, held on hair-thin stalks that allow them to quiver in even the slightest breeze.

Because of the brownish colour of the inflorescence, it's easy to dismiss this plant as unattractive - but take a closer look - it's really rather beautiful in its own way. 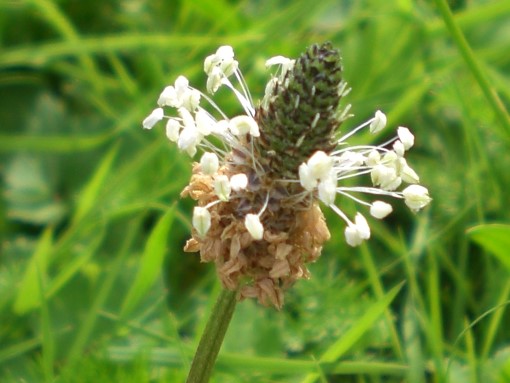 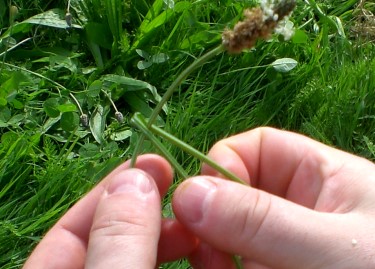 Hold with the flower pointing away from you, then bring the base end of the stalk around and fold it in a loop just below the flower. 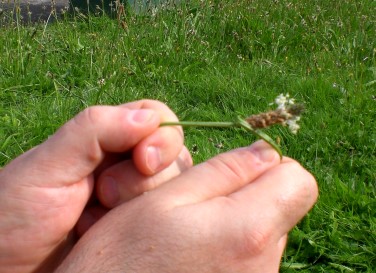 Grasp the stalks firmly in both hands and pull the loop upwards to the neck of the inflorescence.

The stalks are slightly elastic; hopefully, the stalk will snap just below the flower and it will be catapulted forward up to a dozen feet. 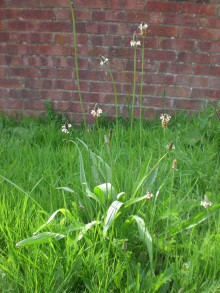 Normally, the picking of wild flowers is not really recommended, however, Ribwort Plantain reproduces quite prolifically - there's very little risk of this species being driven to extinction by kids playing this game - and anyway, by the time they're ready for ballistic use, they already contain some viable seeds, so maybe you'd actually be helping.