What Are Sweet Chestnuts?

Castanea sativa - originally native to southeastern Europe and Asia, this magnificent, large tree is now naturalised and common throughout the UK, having been introduced here by the Romans. 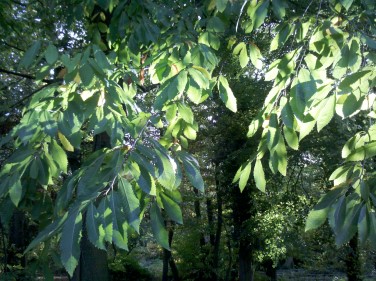 It's a large tree, similar in stature to the English Oak, and with similar, roughly-textured bark (except the grooves in the bark of the Chestnut often run in a spiral up the trunk).

The leaves are thin and translucent, 20cm long or more, with a sawtooth edge. 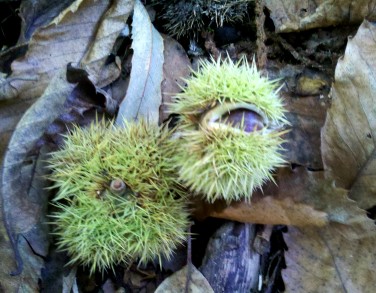 The chestnuts are borne inside a pale green casing armed with many flexible but sharp, needle-like spines.

The casing splits open naturally, usually into four segments, to reveal the chestnuts. In some varieties, the cases split open whilst still on the tree, but more usually, the whole thing falls to the ground and opens there. 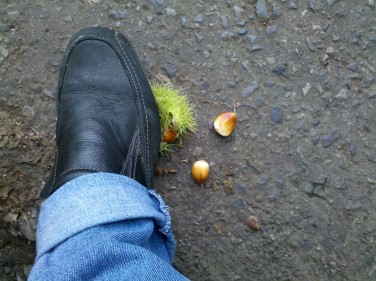 The spiny casing is almost impossible to open by hand, without gloves. I find the easiest way to do it is to move the thing to a hard surface (here, a roadside, but hard ground or a tree stump would also work), and roll it gently underfoot to split it open without crushing it.

The nuts are beloved of squirrels, jays and other wildlife - usually, any cases that have opened naturally before you find them will already have been plundered for their contents. 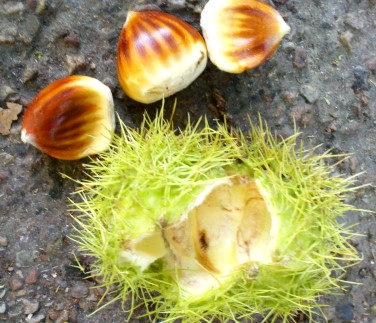 Normally, three nuts are found in each case - a thick, rounded or disc-shaped one, nestled tightly between two hemispherical nuts at the ends.

Sometimes, one or more of the nuts will be flaccid and empty - these are not worth collecting - in some years, the only nuts produced are the worthless, withered ones. 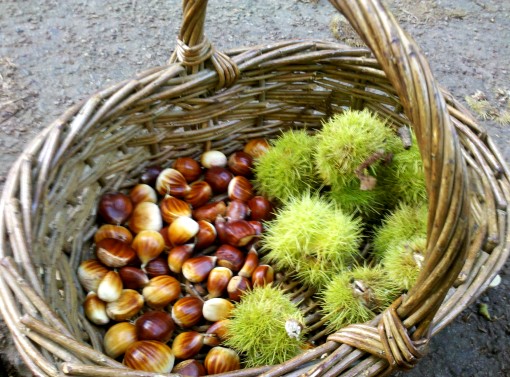 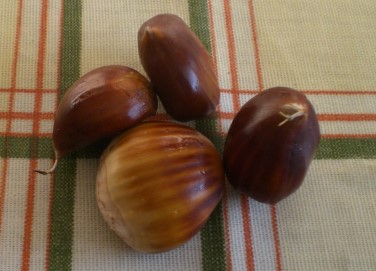 It's probably worth mentioning that sweet chestnuts are not the same as conkers (horse chestnuts, which are not edible) - and there's really little chance of mistaking one for the other.

Most things about the trees and nuts are superficially a bit similar, but sweet chestnuts are unmistakable; teardrop-shaped, stiped or striated with a little tuft of bristles at the pointed end.

But in case you're confused, or just interested, here is the link to the Atomic Shrimp article about Conkers 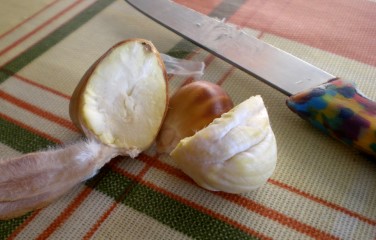 The pale yellow meat inside a sweet chestnut is covered with a thin layer of white pith, which is quite astringent - if the nuts are cooked, this tends to adhere to the outer shell and so is not a problem.

If you're eating them raw (they're nice - crisp and fresh-tasting), you may wish to scrape off the pith with a sharp knife. Personally, I don't bother - so they start off tasting a little bit dry, but after a moment of chewing, the sweetness comes through. 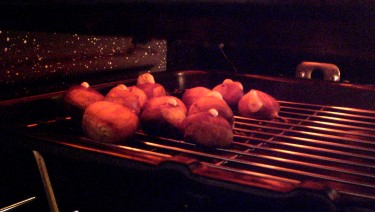 Of course, they're delicious roasted - pierce them with the point of a knife (or they will explode!), then place them under a hot grill for about 10 minutes.

When they're nearly cooked, they will start to 'sing' as steam escapes through the pierced hole in the shell (some may still explode despite being pierced, but this is part of the fun).

When they've been whistling for three minutes or so, test to see if they're done. 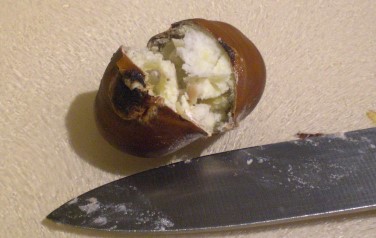 When they're properly cooked, the contents of the nut turn into a fluffy, floury, crumbly mass - with a texture similar to baked potato.

These are such a satistfying autumn treat.

The starchy nuts can be used in place of flour in cakes and other recipes - I'm going to experiment with this and will update this page with my results...

I tried making Marrons Glacés - French-style candied chestnuts. This involves boiling the peeled chestnuts until cooked, then steeping them in strong sugar syrup with repeated daily cycles of heating / cooling / further soaking, until the chestnuts absorb nearly all of it, transforming into delicate, sugary treats.

That's the theory, anyway. In practice, it was unfortunately impossible to peel the inner pith off the cooked chestnuts without them just crumbling into pieces - I suppose I must have boiled them for too long (it was only 10 minutes though - reduced from a recommendation of 20, owing to the small size of these wild nuts).

That was a sad waste of chestnuts - If I get a chance to gather some more, I'll try something else...