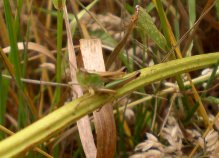 July has been a hot, dry month in my part of the world - and the heatwave has turned the tall grass to straw, but it's been a great time for insects - I've never seen so many grasshoppers. 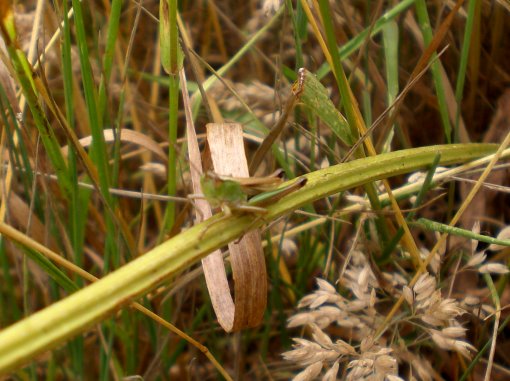 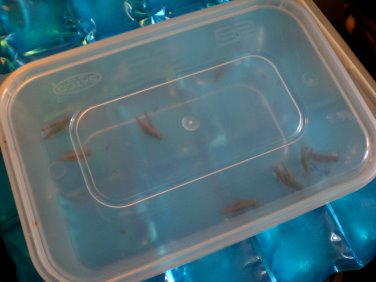 Despite their great abundance, it took me and my son three quarters of an hour to catch a dozen grasshoppers - if I was doing this for sustenance, some kind of net would have been a good idea.

The insects are still quite small at this time of year - about 2cm long.

We gave four of the grasshoppers we caught to our pet gerbils - this might seem an odd thing, but in the wild, insects form a significant part of the diet of these desert rodents, so it's not only right and proper that they should have them, but it's their favourite thing - they pursue, catch and devour the grasshoppers with eager enthusiasm. 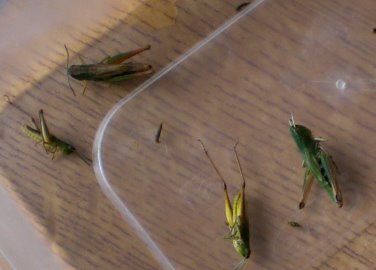 I put the box containing the remaining 8 grasshoppers in the deep freezer to kill them - they would be impossible to handle in the kitchen otherwise!

Two minutes later, they were dead and starting to freeze, so I put a pan on the hob with a little oil in it and prepared to cook them.

I'm not sure how many different species of grasshopper I've got here, or if they're all just different-looking members of the same species - some were green and tan, others pure green - some that I saw (but that escaped capture) were green with some purple markings. 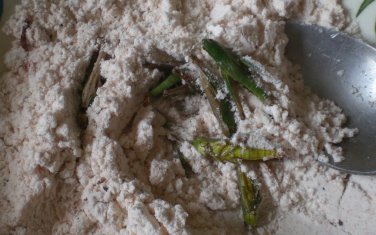 I prepared some seasoned flour, rinsed the insects under the tap and rolled them in it - the idea being to give them a sort of southern fried style coating.

This didn't really work in the end - the floured coating mostly fell off in the pan, but this wasn't a problem (read on to find out why)... 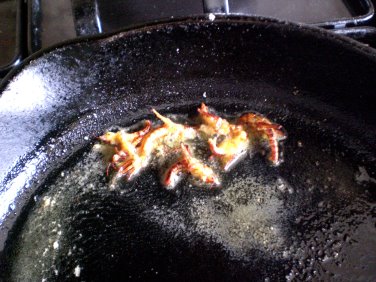 I dropped the grasshoppers into the hot oil to fry.

They sizzled and turned deep golden red in colour almost straight away - this must be a similar thing to what happens when prawns are cooked.

I expected them to shrivel a little, but they actually puffed up as they cooked and became crispy.

I was expecting them to be crunchy - they're not. They are crispy, but softly crispy - a little chewy, but in a really good way - like crispy chicken skin - In fact, the texture and mouthfeel was almost exactly like eating little strips of crispy chicken or duck skin.

The flavour was subtle, but quite pleasant - toasty, a little sweet and maybe a little bit nutty and buttery. Very good - not at all unpleasant in any way, and quite nice in several ways. If I can work out how to catch them in greater quantity, I'll be doing this again - in fact, I could happily eat them frequently. 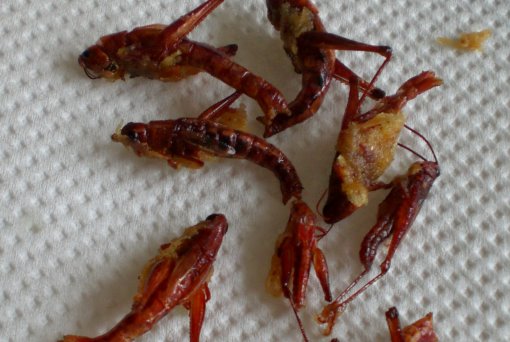 Insects - Food Of The Future?

Insects are considered an unusual food in some parts of the world, including Britain, but really, it's us, not everyone else, that's doing something unusual - the consumption of insects is actually normal for more humans than not.

But insects could be in some ways a more viable food for humans in the future than conventional farm animals such as cows or pigs. Insects reproduce and grow fast, they can be farmed in very compact spaces, they're highly nutritious and because they are typically consumed whole, there's less waste.

They can be farmed in places where it would be unacceptable to keep vertebrate livestock, they can be fed on crops or weeds that are no use as food for people, or on waste products from cereal production or other horticulture.

One of the things I like about the idea of catching them 'in the wild' (actually, it was along the margin of a cultivated field) is that they're a pretty clean food - if they had been exposed to pesticides, they wouldn't be jumping around trying to evade capture.

I am definitely doing this again - maybe I'll try netting them with my big shrimping net or a small hand net.