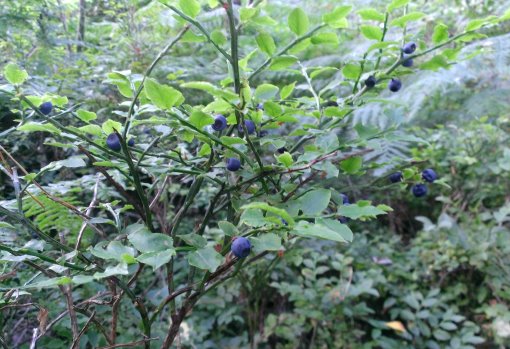 This is a really delicious tart, deep and packed to the brim with fruit - easy to make, but sure to impress.

Start with a 9 inch sweet shortcrust pastry case (I'm not going to bother with the recipe for the pastry, as it's easy to look up - or if you want, you can easily just buy a precooked flan case)

Put about 350g of fresh bilberries in a saucepan - add the juice of one lemon and about 75g of sugar.

Bring to a gentle simmer, starting over a very low heat. The berries will burst and release a lot of juice - as this happens, you can turn up the heat a little and stir to dissolve the sugar. Taste and add a little more sugar if you think it's not sweet enough, but don't over-sweeten or you will overwhelm the delicious crisp acidity of the fruit.

While the fruit is heating, put four teaspoons of cornflour in a cup and add a quarter cup of cold water - stir to mix to liquid consistency.

The moment the fruit starts to bubble, pour in the cornflour mixture, stirring vigorously as you add it - keep stirring and heating and in the space of less than a minute, the fruit mixture will thicken dramatically.

Remove from the heat and pour the contents of the pan into the flan case - use a spatula to scrape everything out of the pan, then (if necessary) spread the fruit mixture out evenly in the pastry case.

Leave to cool for at least an hour - ideally longer - it should set to a thick, silky jelly-like texture - just thick enough not to run away when the pie is cut into wedges. Serve with something creamy - for example ice cream, clotted cream or mascarpone cheese. 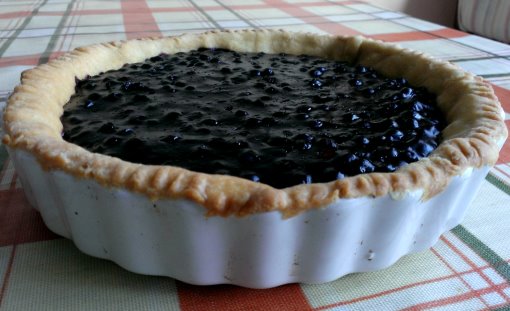 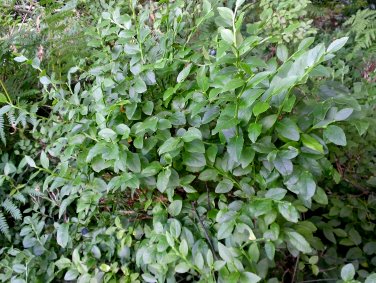 This was a bit of an experiment - some of my wild food books mention bilberry leaf tea in passing, or talk a little about the supposed health benefits of drinking it, but say little or nothing about the method of preparing it, or what it tastes like.

So at the end of a productive day of berry-picking, I cut (from a place where the bushes were growing in very great abundance) a couple of sprigs of bilberry leaves to take away. On returning home, I stood them in an empty glass and placed it on a windowsill to dry. 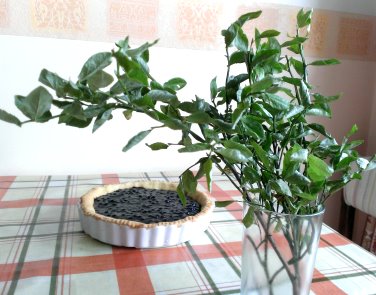 The next day - quicker than I expected - the leaves had dried out. They were crisp and rustling, but not crumbly or brittle.

So I set about making my first cup of bilberry leaf tea. 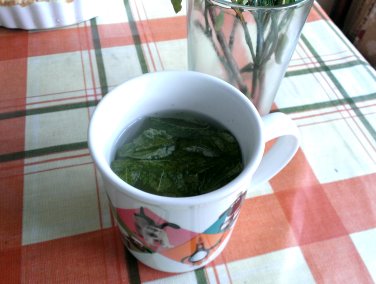 I picked about 20 leaves and placed them in a mug of boiling water.

I left this to steep for 5 minutes, then poured it through a strainer into a fresh mug, to which I added a thin slice of lemon. 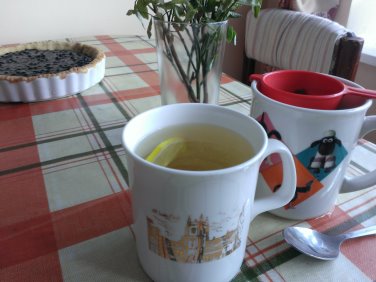 The end result is a pale straw-green beverage with a pleasant, slightly fruity aroma.

To taste, the drink is a little similar to green tea - pleasantly astringent and refreshing, ever so slightly tannic with an intriguing fresh, fruity-leafiness - something like a blend of tea, green apple and the subtle forest aroma of the bilberries themselves. 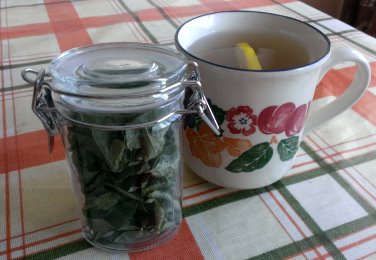 The dried leaves strip very easily from the twigs - although if I was picking them in greater quantity, I would not have cut whole stalks - as I suspect the leaf-stripped stems would sprout new leaves if left on the plant.

The dry leaves can be stored in an airtight jar for later use.