I've known about the existence of Bacon Salt for a while - and there seems to be bacon flavoured everything else, but I woke up this morning wondering if Bacon Sugar is a thing.

An internet search revealed a few pictures of things people were calling Bacon Sugar, but it doesn't seem to be for sale anywhere - so I decided to make my own... 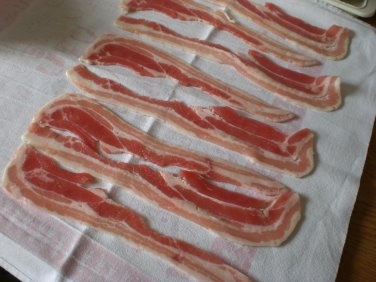 I started with eight rashers of streaky bacon - a dry cure bacon might have been better, but this is what I had.

Out of the pack, it was a little moist - and I didn't want it to boil in its own juices in the pan - so I blotted it dry on a clean cotton cloth. 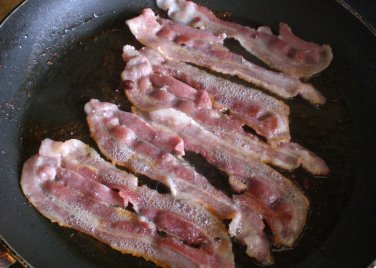 I fried it gently in a pan, taking care to flatten it as much as possible - so it would cook evenly.

It started to crisp up nicely - this is the stage where I would normally start to consider it done - crisp edges on the fat, but still pink and bendy.

(I do realise the above statement may seem strange if you're accustomed to fully crisped bacon, but it really is quite normal to cook bacon only about this far in many parts of the world, including here in Britain). 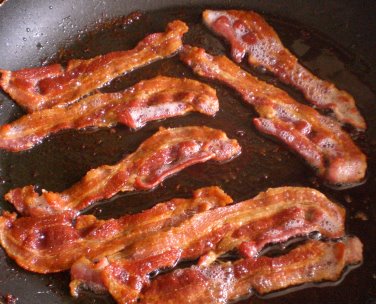 But in this case, I did want crisp, brittle cooked bacon, so I turned down the heat and kept going. 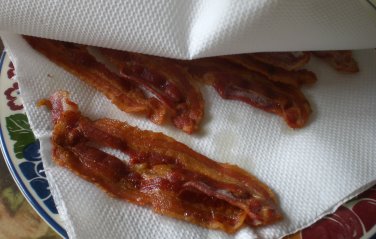 I transferred it to a plate lined with absorbent kitchen paper and pressed more paper on top to blot away as much fat as possible.

Then I left it to cool completely. 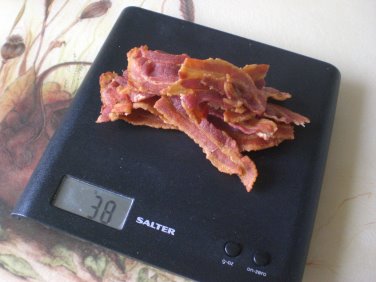 I weighed out three times that amount of granulated sugar. 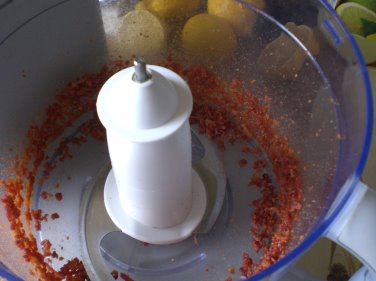 I put the cooked bacon rashers in my food processor and ran it until the bacon had been reduced to little pieces.

This took a couple of minutes and I did have to stop once or twice to scrape the bacon back down into the bottom where the blades could get to it. 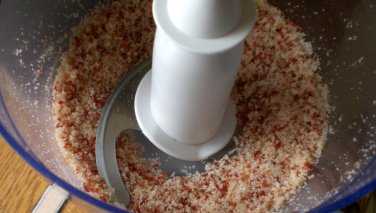 I added the sugar and blended for another couple of minutes until I was satisfied that it was as completely mixed as it would get.

And that was it - I had made Bacon Sugar!

Of course, I tasted some straight out of the food processor - and it was good - sweet, a little sticky, and at the same time, deliciously salty and savoury.

The first thing I tried was putting bacon sugar on popcorn - and it was good. 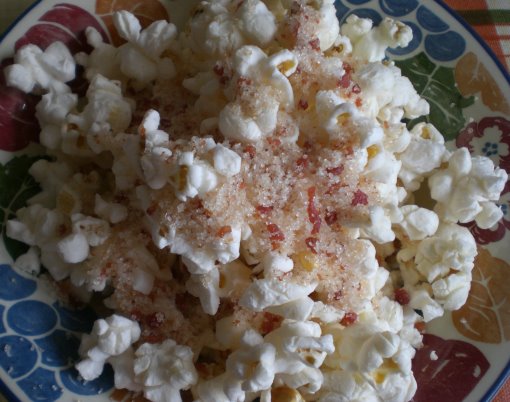 I had a little trouble getting the bacon sugar to actually stick to the popcorn - it might have worked better if I had mixed it while the corn was still hot and steamy, straight out of the popper, but I was interrupted by the phone.

Still it was very nice, but best eaten with a spoon so as to get some bacon sugar together with the pieces of popcorn. I know there are commercial varieties of microwave bacon popcorn - this was better. 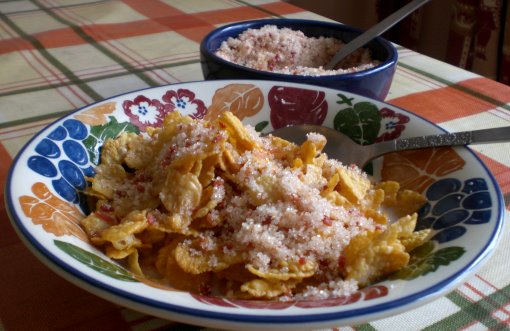 Cornflakes with milk and bacon sugar. This is completely and awesomely delicious. This could be what bacon sugar was meant for.

So, all in all, this has been a successful experiment - and I will be looking for more applications for this wonderful condiment...

Other Possibile Uses For Bacon Sugar

I think bacon sugar could probably be used on just about anything where ordinary sugar would normally be sprinkled - I am certain that jam doughnuts rolled in bacon sugar would be quite lovely - and I suspect that bacon sugar sprinkled on top of a freshly-baked apple pie would be great too.

It doesn't work so well in places where sugar is added and stirred in to dissolve - i,e. coffee. Of course, I tried it anyway - it was OK, but weird - the bacon did add a sort of smoky richness to the coffee, but it was nothing remarkable.

If you've got any ideas where bacon sugar could be used, please feel free to comment on this article.