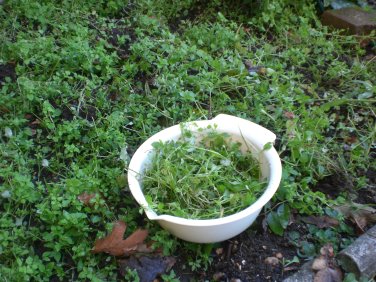 As I was trying to collect a large number of the seeds, I thought I could probably get away with less discriminate picking than usual (but I was a bit wrong, as discussed further down).

I picked a full bowl of chickweed stems, along with their leaves and crucially, their little seed pods.

Back indoors, I filled the bowl with cold water, gave the weeds a good swish around, then pulled them out into another bowl, leaving behind only the water - well, and a load of dirt, and hopefully some seeds. 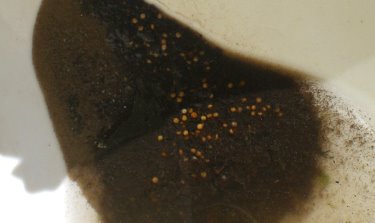 There did turn out to be a few hundred seeds in the bottom of the bowl, but there was a whole load of silty mud there too.

Separating the seeds from the dirt wasn't easy, as both things sink - and even using a gold-panning type method, they didn't really seem to want to separate.

In the end though, I noticed that if I let a load of dirt and seeds wash up across part of the bowl, I could press my fingertip against it - and most of what stuck was seeds, not dirt - the seeds then came off my finger when I dipped it into a glass of clear water. 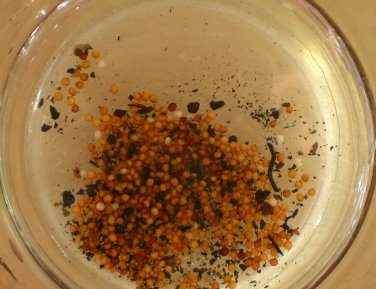 A little while (and far too much effort) later, I had enough seeds to start the experiment.

I wasn't going to worry about a few stray specks of dirt and debris.

Picking the seeds out from a load of sediment in water, as practiced here, was horribly laborious - there must be a better way.

I suspect it might be easier to collect bunches of (cleaner) plants, then leave them on a wire rack over a large tray - and allow the seeds to drop out naturally as they dry and ripen. 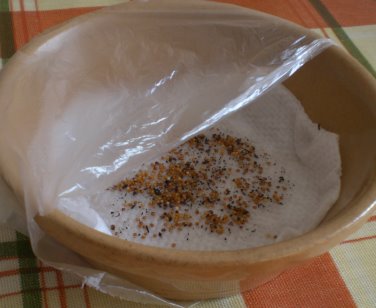 I spread the seeds out across a couple of layers of damp kitchen paper towel and put this inside a plastic bag to prevent it drying out too fast.

The bag will not be completely sealed, or else all sorts of nasty anaerobic things might happen.

That all happened in the evening of 15th October - further updates will appear as and when they develop...

I thought it might be interesting to take a closer look at chickweed seeds. 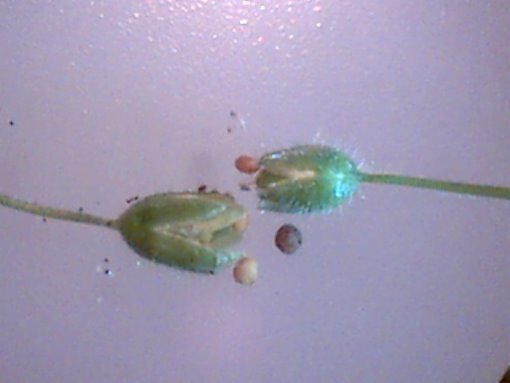 The seeds are borne in little oval pods which droop down on short stems beneath the plant - there are up to maybe a dozen seeds in each pod, but as each plant bears hundreds or even thousands of these pods, it's little wonder that this is such a persistent weed. 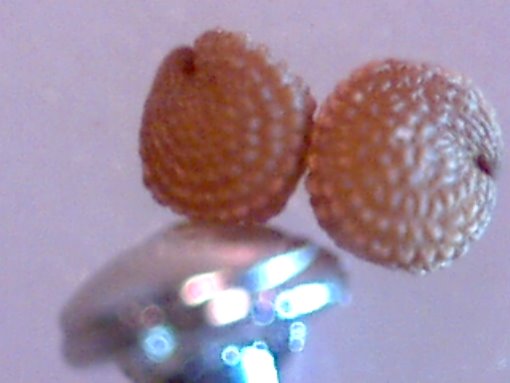 The seeds themselves are slightly flattened, roundish with a little crease in them, and knobbly all over.

Shown here against a pinhead for comparison - they're about 1mm in diameter. 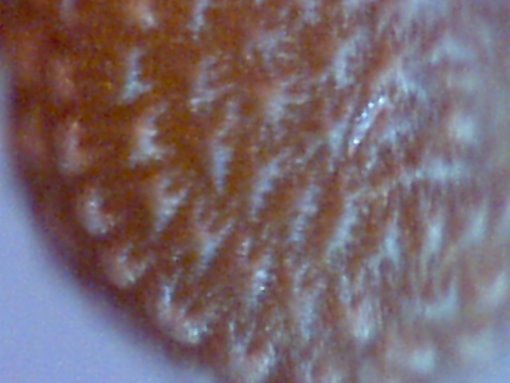 Closer still, the knobbly bumps on the seeds are revealed to be little star-shaped bumps. All this makes me wish I had a better microscope.... 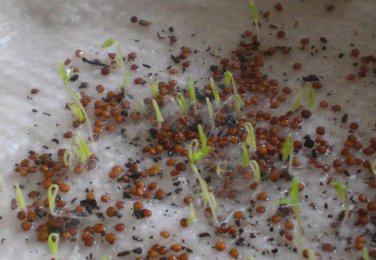 19th October (4th day) - some of the seeds have sprouted and produced shoots about half a centimetre tall.

24th October (7th day) - the sprouts are more than 2cm tall and have greened up a little, however they are very spindly and insubstantial - and on reflection, there's a reason for this - the seeds are tiny, so unlike mustard or mung beans, they contain very little food reserve for the growing seedling. 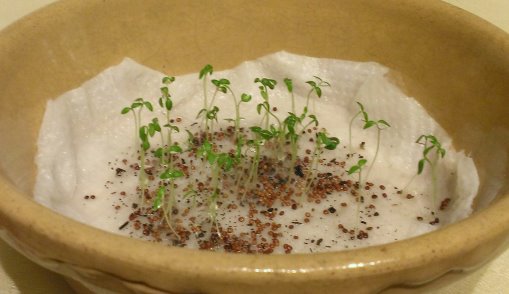 I tasted a couple - and they're OK - texture of cress, but with the nutty, earthy taste of chickweed.

However, it's just not worth growing them like this - only about ten percent of the seeds germinated, and the amount of micro-salad produced here was tiny.

A better plan might be to collect the seed pods whole, dry them and store in a paper envelope, then plant in a pot of compost on the window sill in the depths of winter - and allow the plants to grow to 10cm tall or more before cutting.

So that's the end of this experiment - interesting, but not very fruitful. Oh well - can't win 'em all.