The Museum Of Disposable Forks 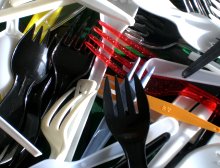 This is something that's been slowly building at work and I have been meaning to document it for a while.

Welcome to The Museum Of Disposable Forks! 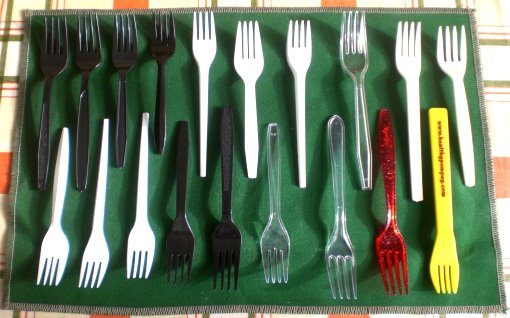 How It All Began

The Museum Of Disposable Forks is actually only on loan to me from a colleague, who wishes to be identified only as Crazy Rainbow Lady.

The collection began one lunchtime, when she happened to notice that two superficially similar plastic forks were in fact different. On rummaging through a drawer, further examples were found and at that point, it was easier to find forks that differed from one another than those that were the same.

And so the museum was born. Amongst the standard forks above, for example, there are those that are the same basic shape, but have a different texture on the handle, or prongs that are reinforced in a different way on the back - no two are the same. 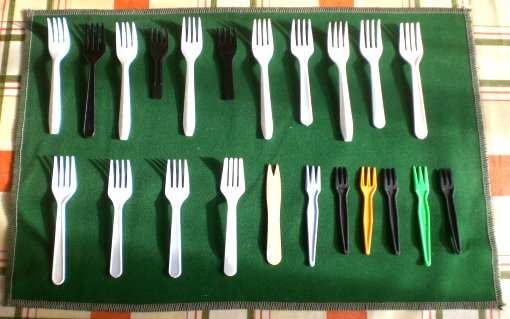 Many of these mini forks were included inside the packaging of noodle pots or packs of prepared salad - again, there are examples that appear superficially similar, but are different (more on this in detail below).

The fork at bottom centre is stamped from a thin piece of wood - this is a chip shop fork - these are given away with chips and other fried food. Some of the small plastic forks to the right of it are also from chip shops - others from pots of fruit salad.

Most of these mini forks are pretty useless - so short that you get your hands messy reaching into the food container anyway, or so feeble and blunt that they are scarcely functional. 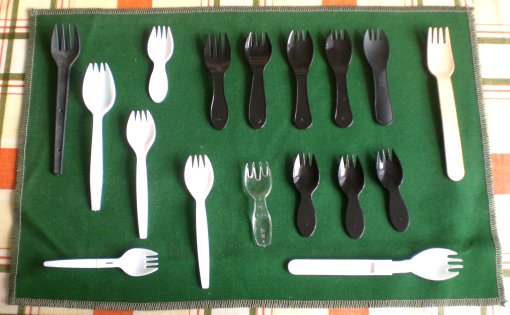 There was some debate about whether sporks were even worthy of inclusion in a museum of forks, but in the end, they won their place by sheer diversity.

Categorising the inventory of the Museum of Disposable Forks isn't easy - in the early days, it was imagined that some kind of taxonomy could be developed - based on the size, shape, material, number of prongs and other traits of the forks in the collection, but this proved almost impossible.

For this reason, the two sporks at the bottom of the image above appear both in the Sporks exhibit, and in the next one: 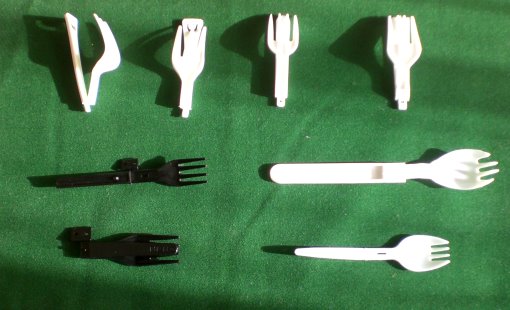 These folding and two-part forks/sporks are an engineering solution to the problem of providing a long fork inside a small package.

Some of them fold and click open with a peg and hole locking mechanism; others were supplied in two parts in a little bag - and slot together; others include two living hinges - one that allows the fork to open out flat, and another that folds a small tab over to lock both pieces in the straightened position.

By now, maybe it's striking you in the same way as it struck us... do there really need to be this many different designs of disposable fork? 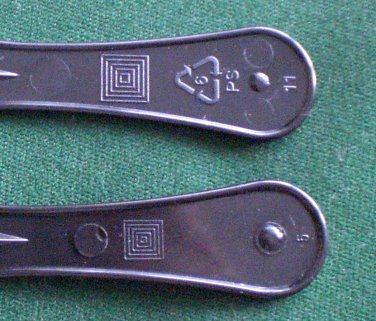 Here's an example of two small sporks that look almost identical - but when turned over, they're different.

Different mould marks - and the one at the bottom has a very slightly slimmer waist, and a slightly longer reinforcing rib under the bowl/tines. 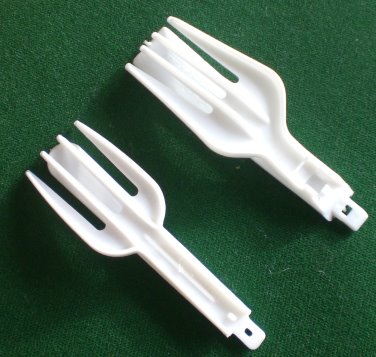 Here's another pair - both folding forks with the same kind of locking mechanism, but one has a slightly more flared shape at the top, and subtle differences in the actual design of the locking tabs.

The spork at the top right of the sporks display is made from thin wood (see also detailed view below) - pressed into shape presumably with a steam pressing process - and there are a couple of standard forks (the two at the top right of the first image on this page) that have a creamy opacity and soft flexibility that makes me suspect they are moulded from some kind of bioplastic - take a closer look below: 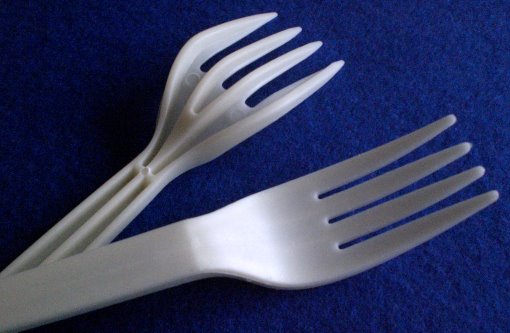 Possible bioplastic forks (thicker, yellowish plastic with a sort of softish, porous feel to them) 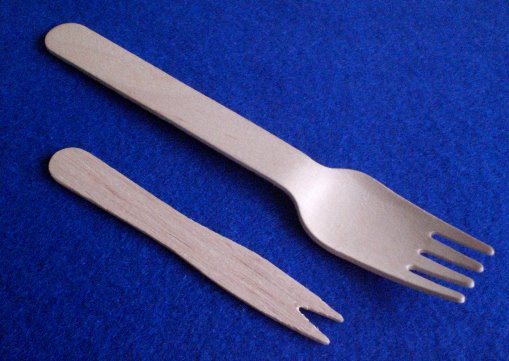 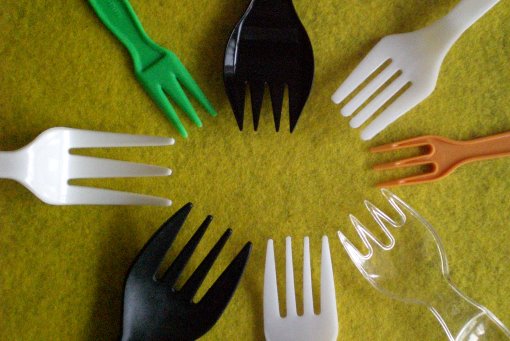 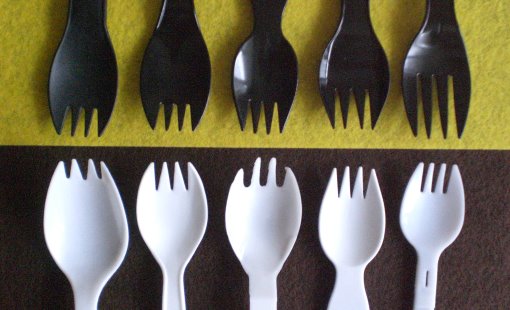 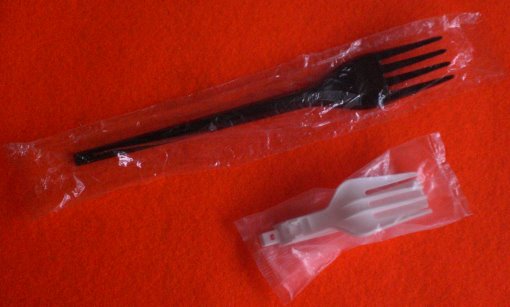 Some of the forks come individually-wrapped in a plastic sleeve - typically these are the ones found inside chilled packs of prepared food, where they would be covered with sauce or dressing and require washing before use

Christmas At The Fork Museum 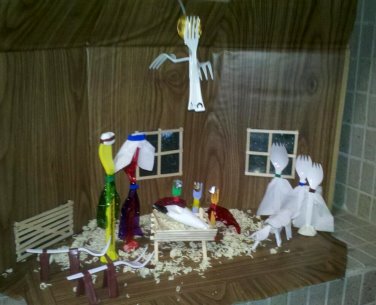 At Christmas 2012, we created a fork-based nativity scene.

All of the key figures (including the animals in the stable) are represented by forks.

It started with a handful of forks that were all found to be different - and over the course of a year or more, built into a collection of 65 disposable forks - each different from the rest.

I don't suppose that really explains why the collection exists. I'm not rather sure any sensible explanation is possible - it's just something that started, and couldn't stop.

What Next For The Museum?

Some have suggested opening a Hall Of Knives, or a Spoon Wing, but that might require a move to larger premises.

(Please don't start sending me all your plastic forks. The madness has to end somewhere.)