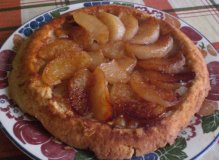 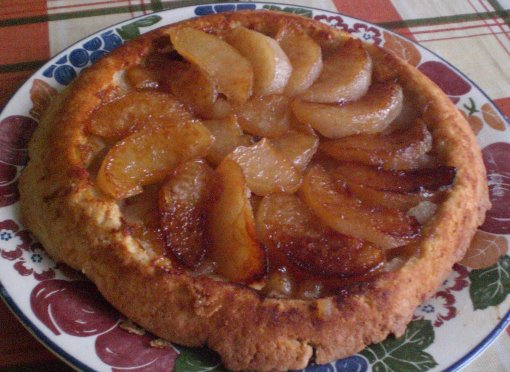 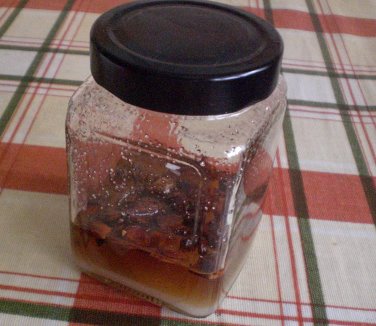 Prepare the anise syrup at least a couple of days before making the tart - ideally a week.

Put the brandy, sugar and star anise in an empty jar and shake to dissolve the sugar - it won't all dissolve at first, so leave it somewhere you can see it and give it a shake every time you pass it.

Once the sugar is dissolved, leave it to steep. 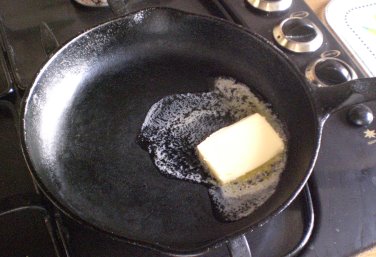 You'll need a pan that can be used both on the stovetop and in the oven - that is, not one with a plastic or wooden handle.

An iron skillet is ideal for this - in fact, when I bought this one, twenty or more years ago, it was because I wanted to make Tarte Tatin.

Melt the 25g of butter in the pan over a gentle heat. Tilt the pan to distribute it evenly, then sprinkle the 3 tablespoons of sugar evenly across the base of the pan.

Turn the heat right down, or off, while you prepare the pears. 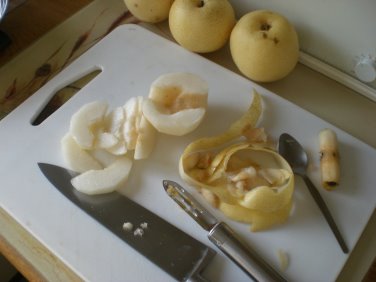 Peel and core the pears - slice one of them into crescent wedges about 1cm thick.

Leave the other one uncut for a moment - until you've sorted out the base layer of fruit in the pan.

Arrange a layer of pear slices neatly in the pan (cut some extra slices from the second pear if required to complete the pattern).

Finely dice the rest of the second pear and scatter it on top of the arranged slices, then turn the heat up and leave it to cook. 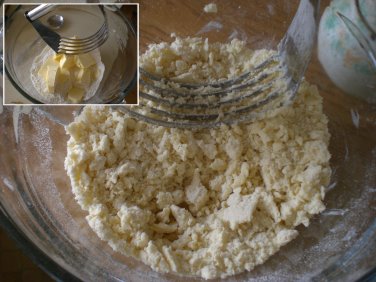 While the pears are cooking, prepare the crust.

Place the flour, caster sugar, semolina and butter in a mixing bowl and rub them together - you can do this with your fingertips, or with a pastry rubbing tool (pictured), or just use a round-ended table knife and cut through the mixture repeatedly until it resembles coarse crumbs. 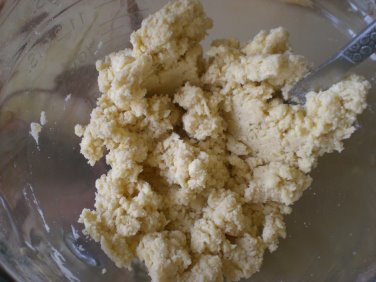 Add very small amounts of cold water, then stir the mixture with a knife - it will begin to come together into doughy lumps.

There is very nearly enough butter in the mixture to bind the dough without anything else added - so it will only take a very little water to get this to happen - just a couple of tablespoonsful - any more and the dough will get sticky and unmanageable.

Use your hands to squeeze the dough pieces together into a ball, but do not knead it any more than absolutely necessary (if you do, the gluten in the flour will develop and the crust will not be so crumbly). 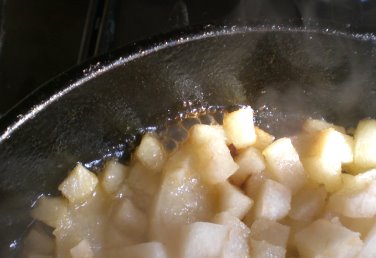 By this time, the pears should have cooked down and become translucent, the juice that came out of them should have reduced down to a syrup, and there should be golden caramelisation evident at the edges of the pan. 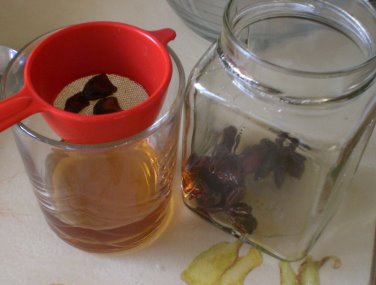 Strain the anise syrup and add it to the pears in the pan - it will probably bubble and spit a little - and there is the slight possibility that the alcohol could catch light and flame off, so watch your eyebrows!

(If you turn the heat off when you add the syrup, it will greatly reduce the risk of flaming). 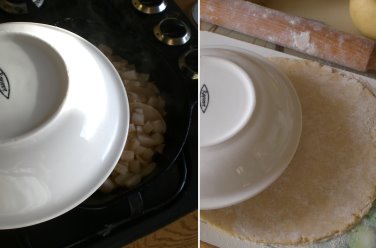 The dough needs to be rolled out to as nearly circular as possible - a little larger than the diameter of the pan.

I used a bowl as a reference to get it approximately the right size. 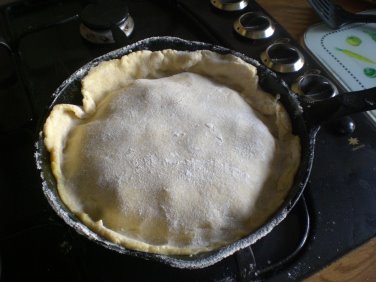 Use a spatula to nudge the cooked fruit inwards from the edge of the pan, just a little.

Carefully and gently roll the fragile circle of dough around the rolling pin to transfer it on top of the cooked fruit.

Tuck the edges of the dough down neatly around the fruit, then put the pan in the preheated oven to bake.

Set a timer for 20 minutes. 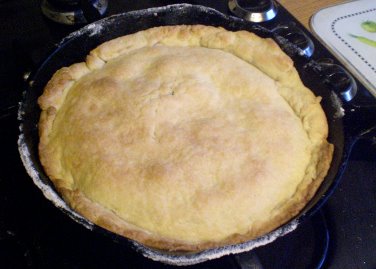 Bake until an even light golden brown on top - then the tart will need to be turned out immediately - otherwise the caramel may set solid and glue it into the pan beyond any hope of removal intact.

USING A THICK OVEN GLOVE, remove the pan from the oven - the handle will be very HOT!

Run a knife around the edge of the pan, then place a plate upside down on top and turn pan and plate over together.

The cooked tart should fall onto the plate (see below for advice on what to do if it doesn't turn out perfectly.

It's too easy to forget that the pan handle is very hot, even after turning out the tart - remember to use the oven glove to move the empty pan back to the stovetop to cool down.

The tart can be served warm or cold - and can be made ahead of time and rewarmed by just putting it in a microwave oven for a minute or until lightly heated through.

It can be served on its own or with cream, custard, etc. But the very best accompaniment for this pear tart (and I will hear no argument to the contrary) is good quality chocolate ice cream. Trust me on this. Pears, anise, shortbread and chocolate ice cream is an amazingly perfect combination. 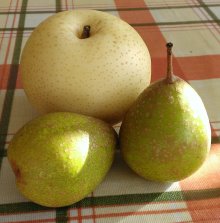 Asian pears are related to western pears, but are a different species (Pyrus pyrifolia) - they most often look like a big, pale golden apple, dotted evenly with little brown freckles, but other varieties exist that are conical, or conventionally pear-shaped.

One thing they have in common, that sets them quite apart from western pears is that the flesh remains crisp when ripe - and they are very juicy.

They're usually eaten raw, out of hand, but they're great for dessert recipes, because the firm flesh holds its shape when cooked - this makes them a little bit more reliable than western pears, which can sometimes cook away to a pulp.

Tarte Tatin is usually made with apples, cooked until caramelised in a pan, topped with pastry and baked, then flipped over and turned out to serve - it was created at the Hotel Tatin in Lamotte-Beuvron, France, but there are a couple of competing myths as to exactly how it came into existence (i.e. by accident or design).

Many recipes call for puff pastry or shortcrust, but I decided to make this one using a modified version of rich Scots shortbread - which is very buttery and crumbly.

If It Doesn't Turn Out Perfectly... 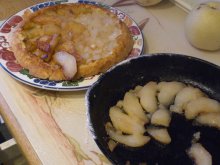 Sometimes the caramel gets a bit too sticky and the top layer of fruit stays stuck to the pan.

If this should happen, don't panic - just set the pan down (don't forget the handle is hot), then use a palette knife or small spatula to lift the pieces of fruit away from the pan and arrange them back in their proper places on the tart base.

Star anise compliments cooked pears very well indeed - it's a match that's every bit as right and proper as apples and cinnamon.