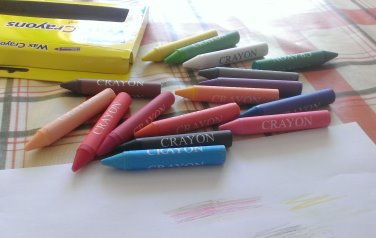 I started with a pack of cheap wax crayons from the pound shop - I picked these because they seemed to have a good selection of reds, browns and orangey-pinks.

I tested them on a sheet of paper, blending the colours to get an idea of how to mix them as melted waxes - the plan being to melt several pots of different coloured wax, then pour them in layers into a mould to create a stratified, striped effect. 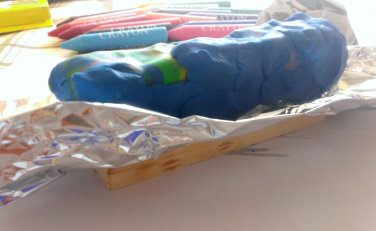 I made the mould from a piece of scrap timber, wrapped tightly in foil, then built over with plasticene.

I warmed the plasticene and pressed it hard against the foil to ensure that all of the corners would be sharp and the sides flat and smooth. 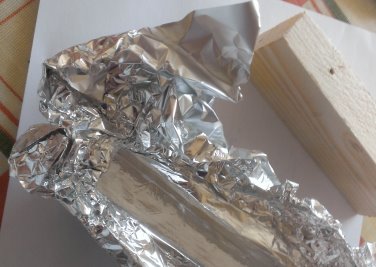 Then I gently eased out the piece of timber to leave a neat, foil-lined mould. Perfect. 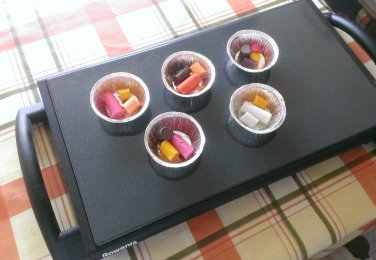 Next it was time to blend the wax - I wanted a selection including golden creamy white, brick red, red-brown and crispy dark brown.

I cut chunks of crayon into foil trays and put them on my electric food warming tray. If you're trying anything like this at home, don't melt the wax over an open flame as it may catch fire and flare up out of control.

Wax like this can be melted by floating the containers in a pan of boiling water - although care must still be taken there to avoid scalding yourself. 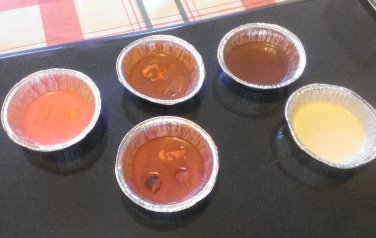 After about 5 minutes, the wax blends were melted enough to be stirred and poured, but the rims of the foil trays stay cool enough to handle, which is good.

I did find it necessary to remove most of the yellow crayon chunk from the white wax blend - I had forgotten how little colour it takes to tint white (the same is true of mixing paints - a little colour makes a big change when added to white. 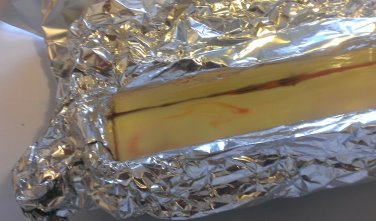 I poured thin layers of wax into the mould in alternating colours - in between pouring each layer, I placed the mould in the fridge to allow it to set - although for some layers, I didn't let it set completely, because I did want it to blend a bit.

I also tipped the mould for some layers and poured blobs and uneven amounts of wax - because real bacon isn't uniformly striped. 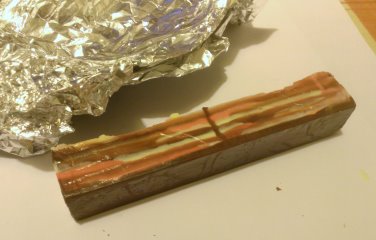 When it was all finished, I set the mould in the fridge for an hour to cool and solidify completely.

Then I just peeled away the mould to reveal my bacon crayon!

I cut it in half to make it easier to handle and I shaved some of the untidy edges smooth with a sharp knife.

These cheap wax crayons were a little too hard and dry really (but I wasn't going to waste expensive ones on a potentially destructive project like this) - so I had to warm the paper a bit, but the effect was fairly close to what I had originally imagined - the striped bacon crayon draws whole rashers all at once! 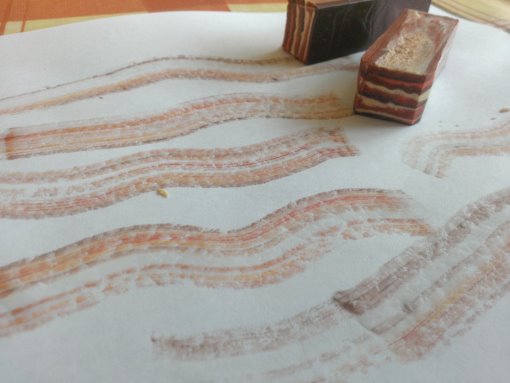 Taking a closer look at the effect - as you can see, the deliberate uneven pouring of the wax means that as the crayon wears away, the stripes change in width and configuration - just like real bacon. 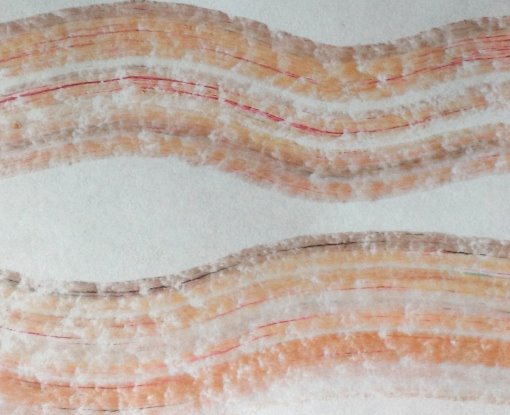 Can I Buy One?

Not from me - I've got other things to do after this project, but as you can see, it's not hard to make your own.

I have no objection if anyone reading this wants to make these and start selling them - just remember - you saw it here first.

Does It Smell/Taste Of Bacon?

No! That would be weird. What's wrong with you?

Why Did You Do This?

The idea came to me when I stumbled across an online chart of official Crayola colours that seemed really comprehensive - something clicked in my brain and I suddenly realised that although many food-named colours were there (almond, cherry, salmon), bacon was conspicuously absent.

Apart From Drawing Bacon, What Can This Be Used For?

What Would You Do Differently Next Time?

I'd use softer crayons, but apart from that, I think everything went as well as I could possibly have hoped.

Why Is It Called Cray-Con?

Obviously it's a collision of parts of the words 'bacon' and 'crayon' - other possibilities included Bacrayon, Bacrola (possible trademark issues) Cray-O-Bac, etc. Cray-Con was the choice of the focus group (comprising me and a workmate).