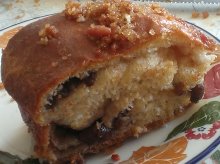 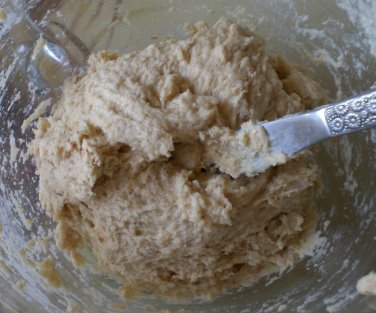 Start the bread dough - place all of the ingredients from the first section (above) in a large bowl and mix together with a table knife until blended to a coherent ball of dough.

There's no need to knead this dough - just mix until there are no pockets of dry flour remaining.

Cover the bowl and leave in a warm room for an hour, or until the dough has doubled in size. 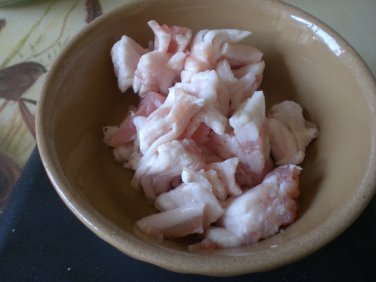 Prepare the bacon - I used strips cut from the top edge of rashers of middle bacon (I cooked the less-fatty bit of the same rashers in another pan and ate them in a sandwich).

The reason for using fatty bacon is that once cooked, the fat will render out, leaving behind something that is golden, crisp and very delicate.

Cut the bacon fat into smallish squares and cook over a medium heat in a frying pan. 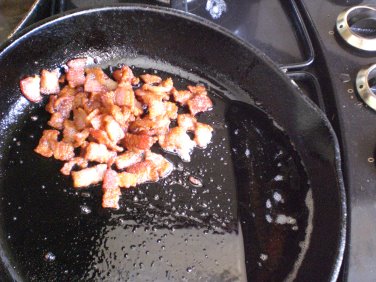 After a while, the fat will melt out of the bacon and it will start to turn golden brown.

Don't drain this fat off until the end of cooking - as it conducts heat to the bacon pieces and ensures that they all cook evenly.

When the bacon is all cooked and crispy, take the pan off the heat and leave it with a spoon or other object under one side and scrape the bacon pieces to the higher end of the pan - this will allow the fat to drain away from the crisped bacon.

Spoon the liquid fat into a dish - the fat from unsmoked bacon is more or less the same as plain lard (salt isn't fat-soluble) - so it can be used as part of the lard for the filling in this recipe. 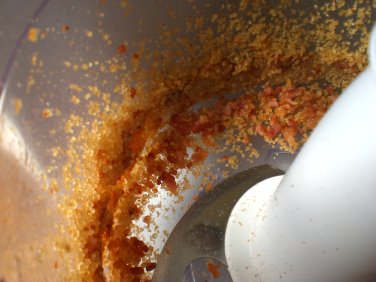 Place the cooled cooked bacon in a food processor with the Demerara sugar and blend until it's broken up into crumbs.

Set this aside in a bowl - it will be added to the top of the loaf halfway through cooking. 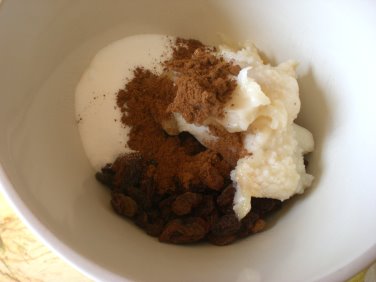 Place all of the ingredients for the filling in a bowl and blend them together with a wooden spoon.

This will form a fairly unattractive lumpy brown paste, but don't worry - it's all about the flavour. 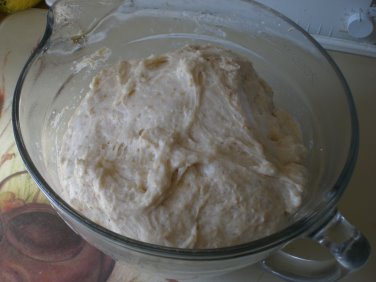 When the bread dough has risen to at least double its original size, give it another stir around with a table knife - this will knock the gas out of it and it will revert to a smaller size.

Turn the dough out onto a floured board and, using a rolling pin, flatten it out into a large rectangle (maybe 1cm thick or less). 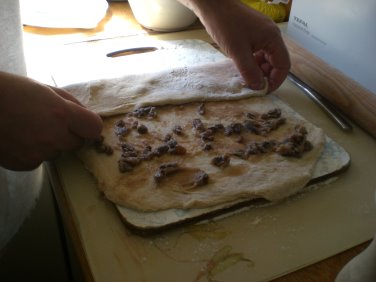 Spread half of the fruited filling mixture across the rolled out dough as evenly as possible.

Fold both ends of the dough into the middle, overlapping them slightly so that none of the sticky filling is visible.

Rotate the dough 90 degrees, roll it flat again and spread the other half of the filling mixture across it - then fold the other two ends into the middle. 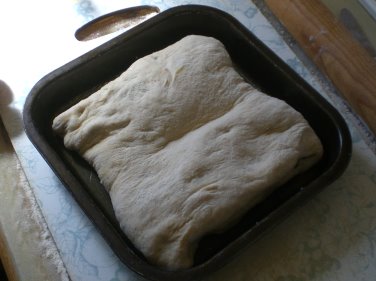 Turn the folded dough over (so the join is underneath) and place it in an oiled baking tin - about 20cm square and at least 3cm deep.

You can use a round tin - the dough might need a bit of handling to make it fit, but don't worry about this - it will expand to fit before baking and a certain amount of untidy folding is part of the rustic charm of Lardy Cake. 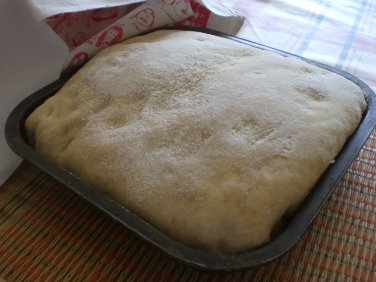 Dust the top of the loaf with flour and cover it with a clean cloth - leave in a warm room for another hour, or until it has risen to fill the tin and lift the cloth.

It's a good idea to stand the tin on a larger metal tray with a raised edge, as some of the fat inside sometimes spills out.

Bake for 20 minutes or until golden brown, then remove from the oven to add the topping. Working quickly, brush the top with a little lard (or butter) and sprinkle the bacon and sugar mixture on top. 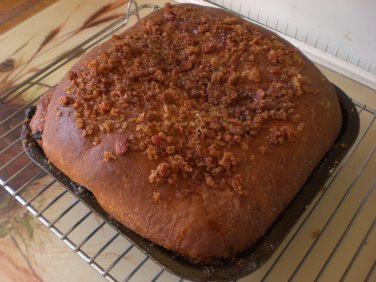 Return the loaf to the oven and bake for another 10 minutes (check frequently to make sure it's not burning).

Remove from the oven and allow to cool in the tin for at least 10 minutes - this is to allow the loaf to reabsorb some of the melted lard and sugar that will be at the bottom of the pan.

When the tin is cool enough to handle, run a knife or spatula around the inside edge to release the loaf if it's stuck at any point.

Lardy Cake is best served warm - either soon after baking, or reheated for a minute or two in a warm oven (or a few seconds per slice in the microwave).

The folded nature of this loaf means that each slice falls apart into strips - but this is normal and expected. The result is a surprisingly light, delicate loaf with a delicious sweet-savoury crust and luscious, moist, sweet centre. Serve with a nice cup of tea. 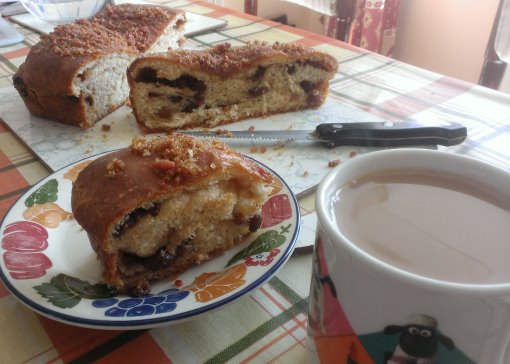