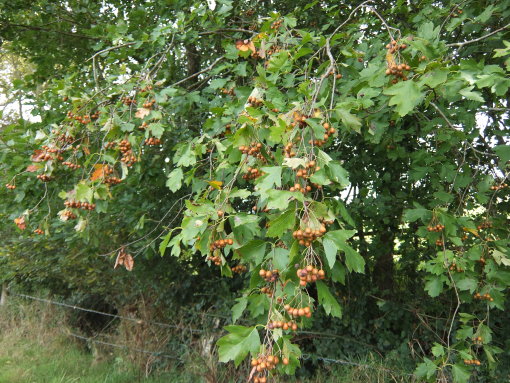 About The Wild Service Tree

The Chequers tree is Sorbus torminalis - a relative of Rowan and Whitebeam.

In spring, it bears clusters of creamy white flowers reminiscent of hawthorn - these are followed by small, russet, berry-like fruits shaped like squat pears, up to about 1.5cm in length. 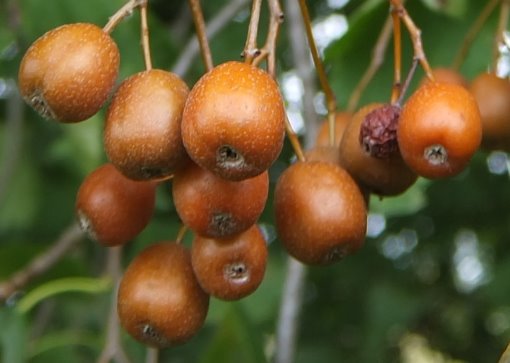 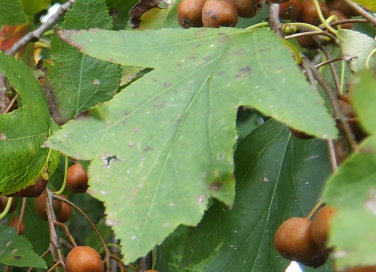 The lobed leaves are superficially maple-like, but not especially regular or symmetrical - variations in the symmetry, the degree to which the lobes are pronounced, and their arrangement, can often all be observed on the same tree 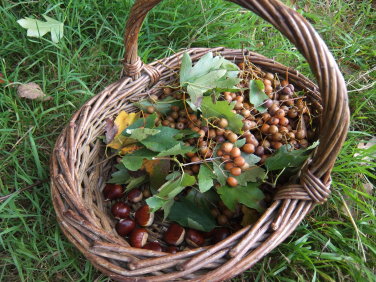 I picked about half a basket of the fruits - cutting off whole bunches of them along with their stalks (tearing the stalk away from the fruits might cause them to spoil quickly).

The exact reason for the name 'Chequers' seems to be lost to history - it may be something to do with the mottled, speckled appearance of the fruit - (which is especially noticeable when it is ripe - see below). 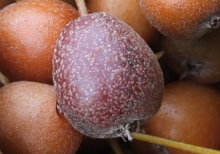 This does look reminiscent of the squares of a formal chequered (checkered) pattern - the effect is somehow more noticeable in real life than this photo does justice - you may just have to trust me on this.

Or it may be that the name is related to the pattern of the bark on older trees, which can sometimes be gridlike and rectilinear. 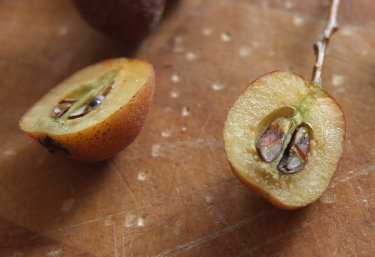 Slicing through one of the ripe fruits reveals it to be not a berry, but a pome (the same form of fruit as apples or pears)

At this stage of development, the fruit it crisp and a little juicy, but quite sour and astringent.

This is the reason that these fruits have fallen out of popularity - because, like medlars, they need to be 'bletted' before they can be eaten. 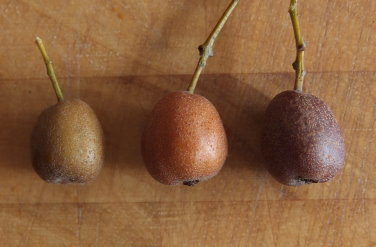 Bletting is often (and incorrectly, in my view) described as 'allowing the fruit to rot'.

Actually, it's really just waiting until the fruit is fully ripe - in the case of Chequers (and medlars), this ripening is accompanied by a marked change in colour, texture and firmness, but it really is only the same process as ripening.

In this picture, from left to right, we see an under-ripe fruit, one that is ripening, and a fully ripe (bletted) specimen.

Ripe Fruit - And Eating Them Raw 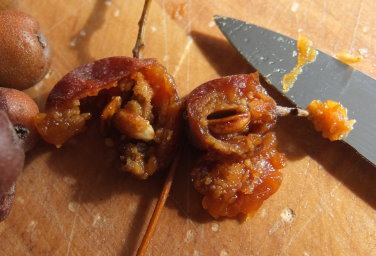 Once it's ripe, the flesh of the Chequers fruit is translucent, golden-brown and soft - to the extent that the skin bursts when cut.

The flavour when eaten raw in this state is quite remarkable - fruity, delicious and moist - like a blend of apples, pears and with a distinct dried-fruit flavour like raisins or dates.

The texture is soft, but with a slight crunchy granularity, like a ripe pear. There is a hard core containing the seeds, which are not edible.

In days gone by, before the common availability of highly sweetened foods, I can well imagine these being a welcome autumn treat - they ripen a few at a time, so a bowl of them picked and left in a cool place might provide a steady supply of ripening fruit for a couple of weeks or more. 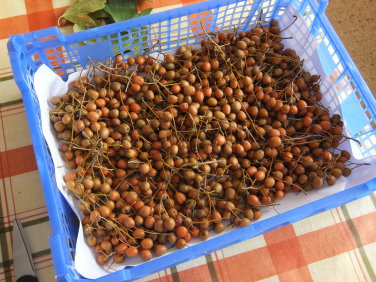 My intention is to make them into a preserve, so I trimmed off any damaged or shriveled fruit and spread the intact ones in a shallow layer on paper in a mesh tray.

I will leave this covered with another sheet of paper in a cool place until a good number of them are properly ripe, then I will boil and strain them, then make a sweetened paste or jelly out of them.

In the week after picking, about half of the fruits achieved the dark, fully-ripened state and all of the others were at the golden, slightly soft stage. I thought this would be the right time to make something with them.

I was wrong about that, but something interesting occurred to me while I was de-stalking the fruits into my big saucepan: Half of them were dark brown in colour, the other half were bright golden.

Half dark, half light... could this be the origin of the 'chequers' name? 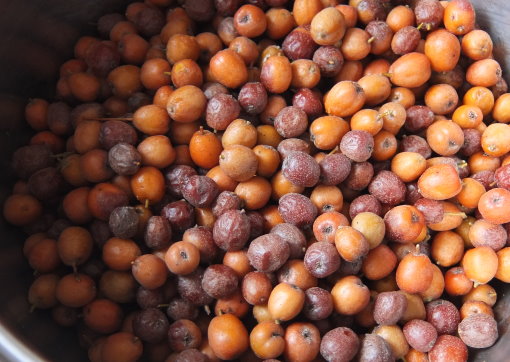 This is where it all went wrong. I cooked the mixed ripe and bletted chequers fruits in a little water for 20 minutes, then I mashed them and forced the pulp through a sieve. My intention was to make a thick, jelly-like paste that could be sliced and served with cheese - like Spanish Dulce de Membrillo.

I got about 600g of fruit pulp, into which I mixed 400g of white sugar and put in a pan to boil, but two things weren't right: the mixture kept burning on the bottom of the pan (and there didn't seem to be any way to prevent this), but worse, the mixture was unbelievably bitter and astringent.

The bitterness was down to the mid-ripe fruits. I just shouldn't have used them in this state. The burning... well, not sure how to fix that - maybe I should have spread the mixture out and baked it dry like fruit leather.

I'll pick these again, but I've learned a lesson that I think will make them more palatable in future - wait until they're fully bletted before using them!

The fact that they ripen progressively, a few at a time from each bunch might have posed a problem in the past, but not today - what I will do next time is to let them ripen in the tray, then every couple of days, pick out the properly ripe specimens and drop them into a box or bag in the freezer - then I'll be able to cook them all together in one go, in their properly ripe state. Roll on Autumn 2015...