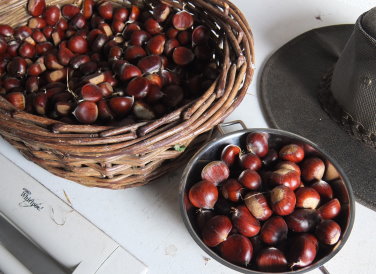 We really did well for chestnuts this year - on a woodland walk just a mile or two from home, we found a group of maybe half a dozen sweet chestnut trees - so heavily fruiting that, even though there was much evidence of squirrels having eaten their fill, there were still a great many nice plump chestnuts lying about on top of the leaves and grass - already fallen away from their viciously spiky outer casings.

In the end, we had to stop gathering them not because the chestnuts ran out, but because the basket was becoming uncomfortably heavy!

So there might be a few more chestnut recipes coming along shortly, but let's start with a theme that has been stuck in my mind since I first started foraging as a child - the use of chestnuts in baking as a substitute or supplement to flour. 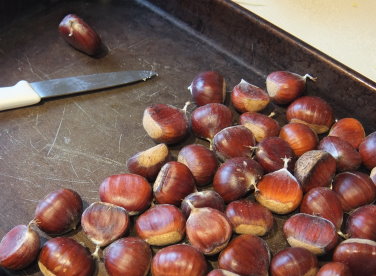 I started with a small colander full of chestnuts...

(Probably about 250g of raw chestnuts - I didn't weigh them, but don't worry! - the recipe I'm going to give here can be easily scaled to whatever amount of cooked chestnut meal you end up with - it's very nearly a weigh-the-same recipe).

Make a small cut in the top of each chestnut, or pierce it with a skewer - this is to allow steam to escape during cooking.

Place the chestnuts on a metal tray and bake in a preheated oven at medium heat for 10 to 15 minutes. 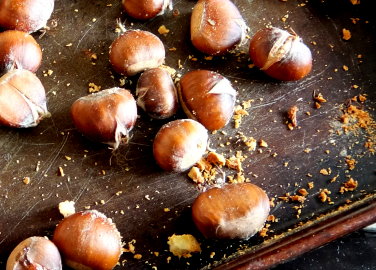 One or more of your chestnuts will probably explode in the oven. This always seems to happen, even though they are pierced.

(Although if you don't pierce them, they will all explode, so this is not a reason to avoid that precaution).

Allow the nuts to cool for 10 minutes before attempting to handle them. 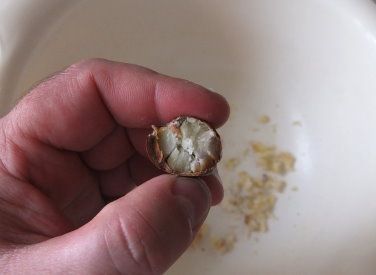 Cut each chestnut in half and scoop out the crumbly cooked middle into a large bowl.

this is easier and quicker than trying to peel away the brittle shells - if you try to peel a lot of them whole, a sharp fragment of shell will eventually jab you painfully right under the fingernail.

You'll end up with a bowl of coarse chestnut meal that looks and feels quite a lot like cooked potato. 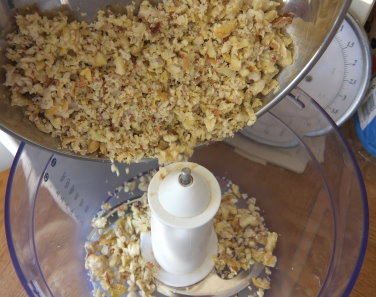 Put the coarse chestnut meal into a food processor. It's too sticky to blend on its own, so add the self raising flour, then process together until finely mixed.

When the chestnut meal and flour mix is processed to a fine-grained texture, add the butter, sugar and vanilla (but not the milk yet). 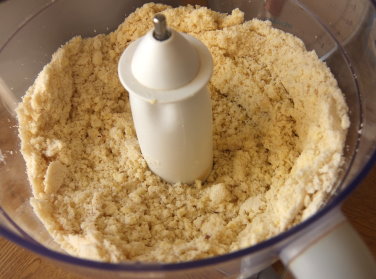 Process again until completely mixed and looking like fine crumbs.

Add a very small amount of milk (a couple of teaspoons - no more) and process again for a few seconds).

Remove the lid from the food processor and pinch the crumbs together - if they don't quite stick together into a dough, add another very small amount of milk and repeat.

Once the mixture has formed a dough, turn it out onto a thoroughly floured surface and press together into a single lump, but don't knead it repeatedly, or the biscuits may come out 'bready' rather than crumbly. 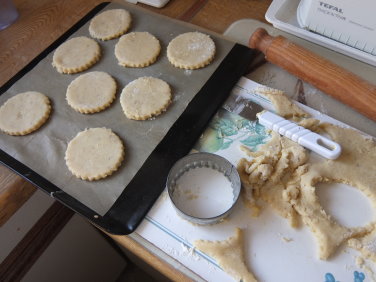 Roll the dough out to about 3 or 4mm thick.

Cut into any shape you like and transfer to a greased cookie sheet (no need for these to be circles - you could just chop it into squares or triangles if you want).

Bake in the oven for 7 or 8 minutes - just until the edges start to turn light brown (keep an eye on them because thin biscuits like this burn really easily). 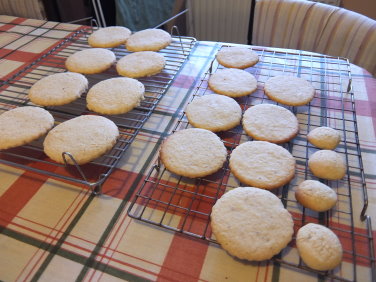 Remove from the oven and allow to cool for at least 10 minutes before transferring carefully to wire racks - they will be too soft and fragile to move when they are hot.

Once cooled, store in an airtight tin or box.

These delicious biscuits are similar in texture to semolina biscuits, but with a lovely nutty flavour.

They are sweet enough to eat all on their own (surprisingly sweet, in fact - and much of that sweetness comes from the chestnuts, not the sugar); they also work very well as an accompaniment to ice cream or cream desserts such as Blackberry Fool. 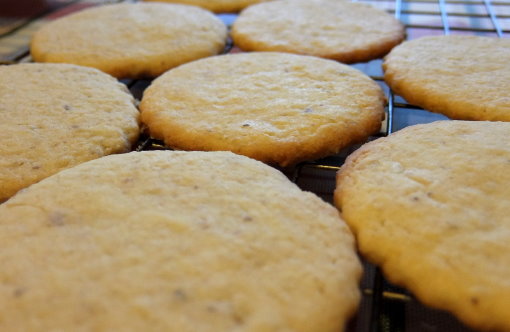