This article has been updated to include some important safety information relating to the outcome of this wild food (mis)adventure. Please read the end section before reproducing any of the activities here.

I've collected and eaten wild mussels before (notably here, where I made the mistake of gathering the biggest I could find - and discovering that they were full of mussel pearls, which was interesting, but made them hard to eat).

This time, although the big ones were there for the taking, I purposely chose smaller, younger specimens.

We were staying in Mawgan Porth - a lovely little village clustered around a sandy cove a few miles north of Newquay - popular with surfers (especially learners, it seems). 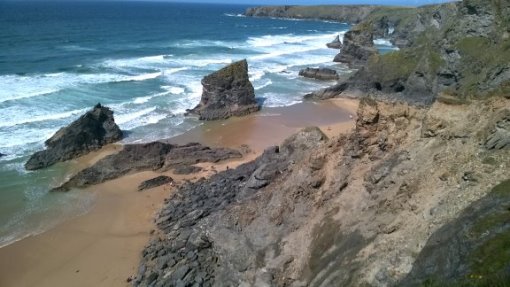 We took an afternoon trip a little further north to Bedruthan Steps - another sandy cove, but this time, only accessible via a steep and rather slippery rock staircase, zigzagging down the face of a sheer cliff. 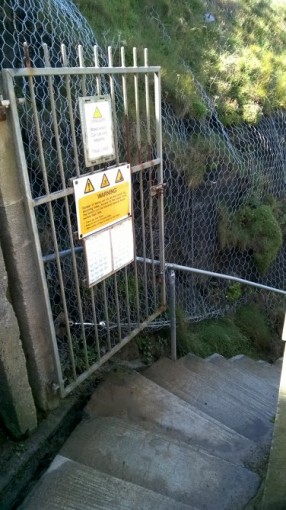 The beach can only be visited at low tide - for a couple of quite compelling reasons:

Firstly, there's a gate that is locked at high tide...

...but more importantly (and the reason underlying the locked gate), there isn't a beach at low tide.  The incoming sea completely inundates the sands and the waves - straight off the Atlantic - crash on the rocks and cliffs. 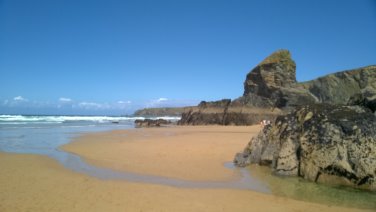 On the beach, the extent of this inundation can be easily seen in the form of the mussel beds - the dark, lower band on the rocks in the centre of this photo. 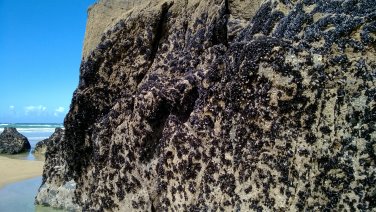 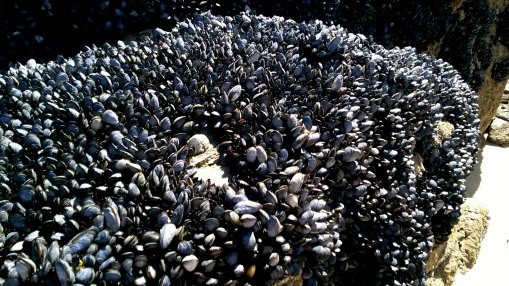 In places, the mussels encrust the rocks so densely that they're all you can see (I assume there's a rock under there, but the surface is completely covered with shellfish of all sizes. 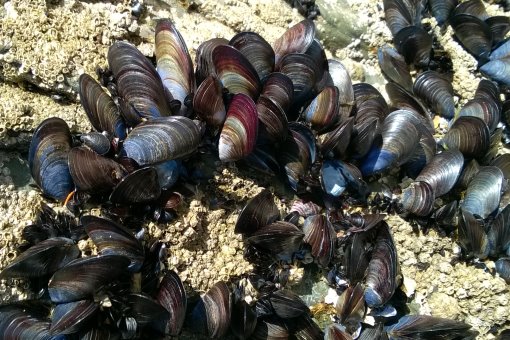 Faced with such bountiful supply, it was possible to be very discerning and only pick the very nicest-looking specimens - the ones with clean shells, clear of barnacles and obvious signs of age or hard life.

Interestingly, the shells were quite a variety of different colours, besides the normal deep blue-black. 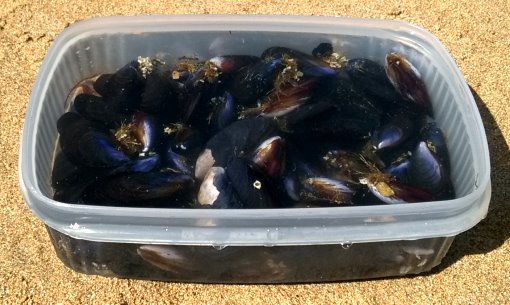 I ate my sandwiches and then collected enough mussels to fill the now-empty lunchbox.

I filled the box with clean seawater and left them in the shade for the remainder of our visit, then drained them and put the lid on to carry them back to the holiday cottage.

(We left the beach maybe half an hour ahead of the point where the tide would have stranded us in one of the inlets - but there were still people coming down the steps as we went up!). 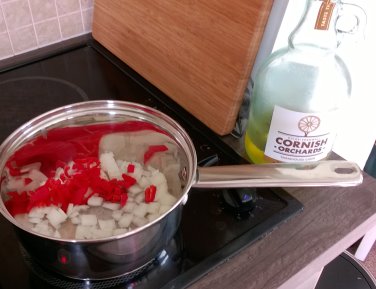 Back home, I chopped a little onion, red chilli and garlic and set aside half a glass of Cornish cider.

I gently heated the chopped vegetables to soften them... 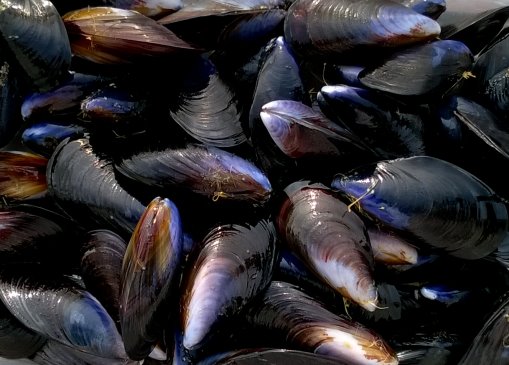 ...while that was happening, I scrubbed and scraped the mussels in clean tapwater, pulling off the 'beards' with which they attach themselves to the rock.

In point of fact, they hardly needed any cleaning (because I picked such nice mussels to begin with) - don't they look fantastic?

I turned the heat right up under the pan, then tipped in the drained mussels and added the cider.

By the time it had come to the boil, the shells were already opening - they only required about three or four minutes cooking.

I tipped them into a bowl and served them with big hunks of rustic bread and a glass of wine.  Nothing much else is required. 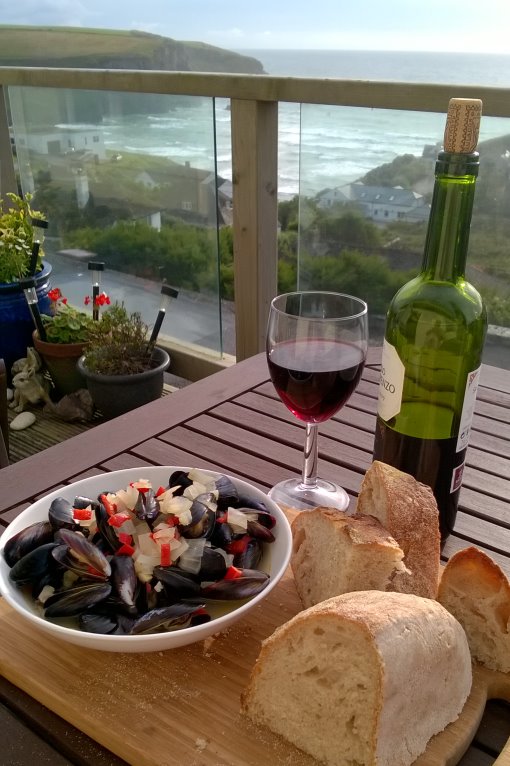 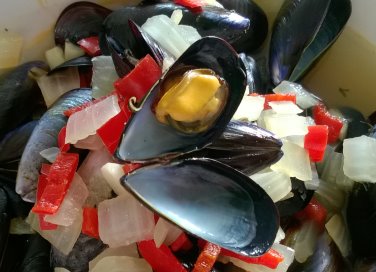 They were really delicious!

Not the biggest mussels I've eaten - in fact maybe the smallest, but what they lacked in size they made up for in tenderness and sweetness.  Really lovely.

The broth that is made when cooking them (a combination of the cider, the juices of the onion and chilli, and the salty juices of the mussels) is perfect for sopping up with morsels of bread.

I always find mussels to be an enormously satisfying meal - even though if you think about it, the serving probably comprises about half a cupful of meat and a few bits of bread, there's something about the hands-on process of eating them that makes this simple, frugal meal always seem like a real feast.

Two hours after eating these mussels, I became suddenly and violently ill. I was the only one in the group who ate these shellfish and the only one who became sick, so the correlation does indicate causation here.

The sickness was very unpleasant and lasted 24 hours, followed by feverish exhaustion that is still partly with me as I write this addendum, nearly 72 hours later.

Clearly I had eaten contaminated shellfish.  Folk wisdom states that you should only eat shellfish in a month with an R in the name (i.e. not the warmer months), but I had been following more recent advice to the effect that this didn't matter, as long as you pick and eat healthy, undamaged specimens, from clean beaches, in areas where they are inundated at every tide, which I definitely did.

Possibly what may have happened here is that rain may have caused runoff from agricultural land, and some of this material may have spilled into the bay I visited to be captured by the mussels, which are indiscriminate filter-feeders. Since eating these shellfish naturally involves consuming the undigested contents of their gut, I may have been exposed to bacteria such as E.coli, or a sufficient dose of the toxins produced by these bacteria to cause toxic (rather than infectious) food poisoning.

Alternatively, the mussels may have been accumulating toxic compounds from algae growing in the water (which again may be due to agricultural runoff, or just warm weather).

The incident has left me quite weak and at the present time, I am not sure I will ever be able to face eating mussels or clams again. Even looking at the images in this article while previewing this edit is triggering a slight aversion reaction.

So... I'm not sure what advice to give at this point.  I don't think I'll be doing this again, but obviously the rest of the world has been gathering wild mussels for centuries, so I am not about to overturn that tradition.  I was unlucky, but it's not a chance I care to court again.

It was full-blown food poisoning, developing into every one of the classic symptoms for the whole of day 3, Subsiding on day 4 leaving me feeling very fragile, but on the road to recovery...

In hindsight, it might not even have been the mussels that caused the problem - there were several other things I ate that day that nobody else in the group did - including my picnic lunch of egg  and tomato sandwiches at the beach.  I'll never know for sure.

I thought it worth mentioning that a couple of days later, further evidence arose to suggest that it wasn't even food poisoning at all.  My wife and son both fell ill with similar symptoms to mine - even though they had not eaten the shellfish.  It's entirely possible that we actually all fell victim to a 'sickness bug' such as Norovirus.  Either way, I ended up with quite a lasting aversion to bivalve shellfish.