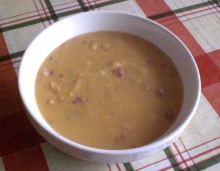 Pease Pudding is a traditional dish made from yellow split peas, cooked with ham stock, salt and spices, then served as a spread on bread, or as an accompaniment to the gammon or bacon with which it was cooked.

Here's how to make it. 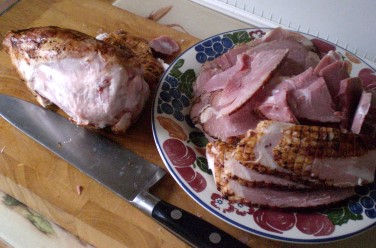 Here's where we start - a delicious on-the-bone ham. After this has been carved and served for dinner, I set aside the hock.

Pease pudding is normally made with ham bones, but can be cooked alongside a whole ham or gammon joint. 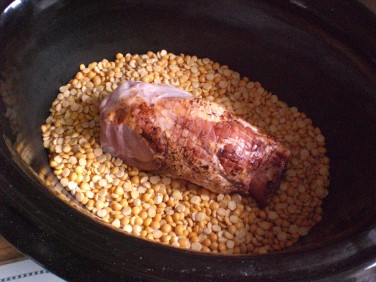 The ham hock will need to be simmered for up to a couple of hours with the peas - this can be done in a large saucepan over a low heat, but for recipes that call for this sort of long, slow cooking, I prefer to use an electric slow cooker.

Put the ham hock in, then add 500g of yellow split peas. Add water until the peas are covered by their own depth (that is, if the layer of peas is an inch thick on the bottom of the pan, there should be an inch of clear water on top of them). 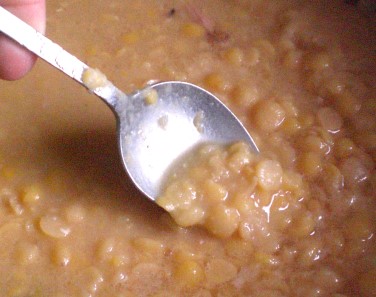 Before cooking, add spices - a bayleaf, a few whole peppercorns, a whole clove. Don't add any salt at this point, as the ham hock may itself be salty enough.

Bring the pot to the boil, then simmer for at least a couple of hours. Check occasionally and add a little more water if it seems like the peas are drying out.

The cooking is complete when the peas have softened and are starting to fall apart. By this time, they will have absorbed most of the liquid, but the overall texture should still be like thick soup. 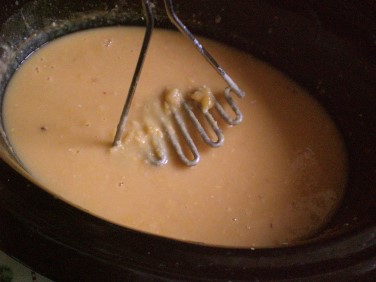 Next, remove the ham hock and whole spices, then pulverise the peas.

I like to mash it coarsely with a potato masher, so that there are still a few whole peas and chunky pieces in it, but a blender can be used to make it completely smooth. 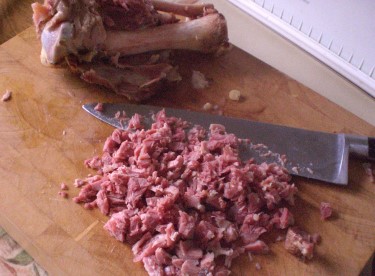 Traditionally, Pease Pudding might only have tiny flecks of meat in it that fell off the joint or bone as it was cooked.

I like to fortify it a little by stirring in a bit of chopped ham picked off the cooked hock. 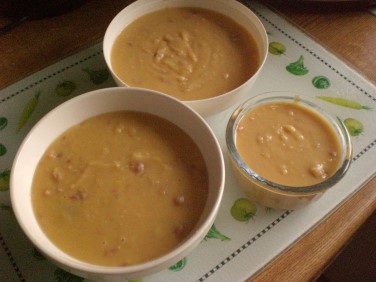 Spoon the mixture out into bowls.

It can be served hot as an accompaniment for a meal, or can be left to cool (whereupon it will set solid) 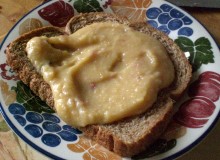 Served hot, it's a sort of thick sauce - delicious on wholemeal bread - or it can be put in small bowls and eaten like a thick, hearty soup. 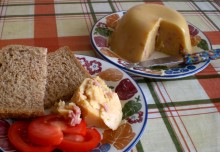 After chilling overnight in the fridge, the pease pudding sets and can be turned out of the bowl - it has a lovely glossy surface.

It can be sliced, but is still soft enough to be spreadable - Again, it's great just served with wholemeal bread. It's hearty and substantial enough to be the centrepiece of a salad or ploughman's style lunch.

This is unlikely to happen, as I like it too much to neglect it that long.