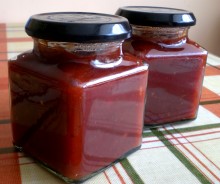 In this one, we're going to make these delicious triple-chocolate finger biscuits - Chocolate sandwich cookies enrobed in dark chocolate and topped with crumbled white chocolate pieces.

Just because something is cheap, that needn't necessarily mean it's bad - looking at the ingredients for all these things - there's nothing scary or offensive in there.

I guess about the biggest shortcoming is that the dark chocolate only has 40% cocoa solids, but considering the price (30 pence for 100g), that's really not so bad. 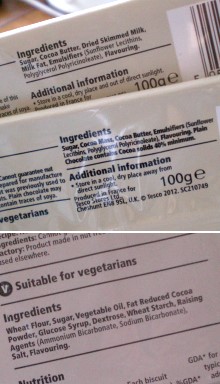 These Are Not Recipes

The it are not going to be recipes - they're going to be quicker, easier and less organised than that. 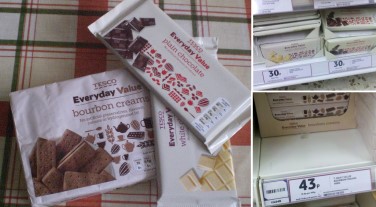 Here's what we're starting with - a pack of Tesco 'Everyday Value' Bourbon biscuits and a bar each of dark and white chocolate, again from the value range.

Cheap doesn't necessarily mean 'bad' though - scroll down a bit for details. 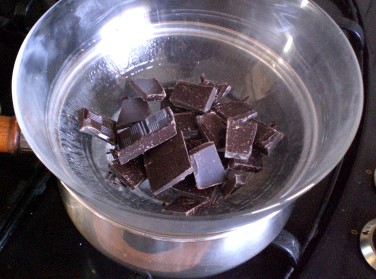 Firstly, I melted the dark chocolate in a heatproof bowl over a pan of boiling water.

It's possible, with a little care, to melt chocolate in a microwave, however, the method here is better for keeping it molten for longer - which helps when coating the biscuits one at a time. 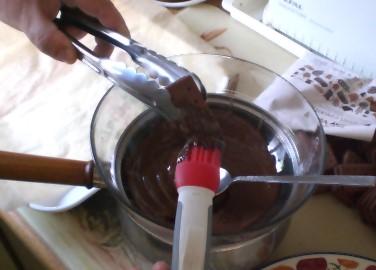 I dipped the biscuits in the melted chocolate, then smoothed it out with a silicone pastry brush.

I set them all out neatly on a nonstick sheet on a tray.

There was enough dark chocolate to coat ten of the Bourbon biscuits (so there were plenty left over for the everyday biscuit barrel). 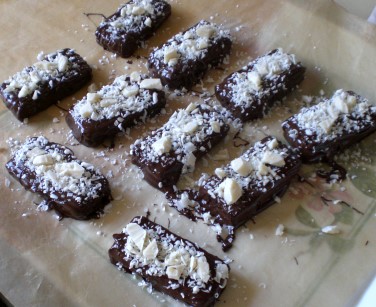 I grated some of the white chocolate on top, then smashed up some of it into coarse chunks and pressed these into the tops of the coated biscuits.

Then I set the tray in the fridge to cool.

The end result is a genuine transformation - the result is more than the sum of its parts. 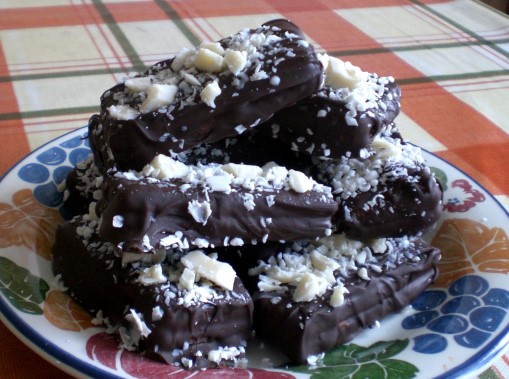 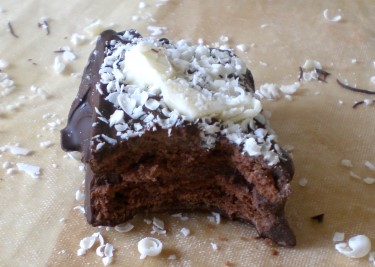 Biting into one of these triple-chocolate biscuits, you really wouldn't guess what they were at the start.

To make these biscuits look even more special, I dusted some of them with a little bit of cocoa powder - less than half a teaspoonful was more than enough for all of them.

Next, we're going to upgrade cheap, basic tomato ketchup into a spicy gourmet version of the same. 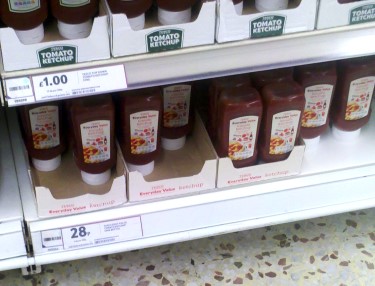 Just because something is cheap, that needn't necessarily mean it's bad - looking at the ingredients for this ketchup, it contains exactly what you might expect, and not much else - tomatoes, sugar, vinegar, spices, etc. 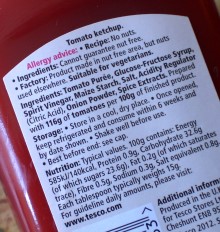 And as ketchup goes - it's not a bad product - it does exactly what you would expect from a tomato sauce, but I'm going to make it into something special. 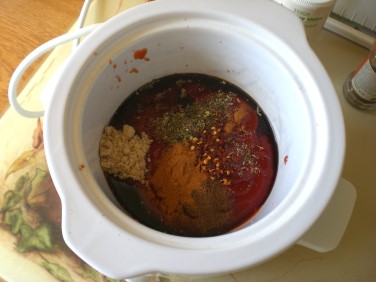 I emptied the whole bottle of ketchup into my small slow-cooker.

To this, I added a small red onion, finely chopped, a tablespoon each of balsamic vinegar and soft brown sugar, then half a teaspoon each of chilli flakes, paprika, ground allspice, cinnamon and dried mixed herbs. 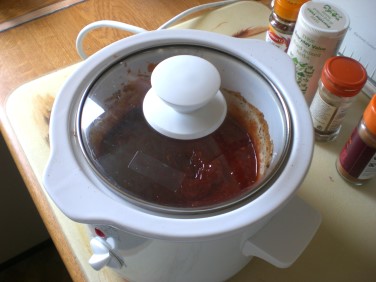 I left this to cook for four hours - it bubbled and simmered away, reducing a little.

Also during this time, the sugars in the mix caramelised and some of the acidity of the vinegar boiled off - leaving a thicker, darker-looking sauce. 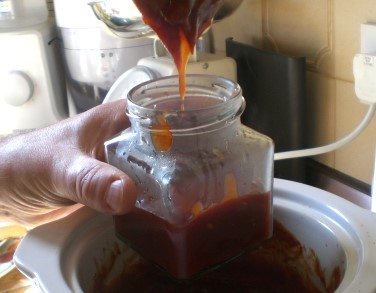 To add to the handmade gourmet sauce effect, I packed the upgraded ketchup into a couple of quirky square jars.

I suppose for the full effect, I could have printed some vintage-looking labels to go on these, but I didn't bother this time. 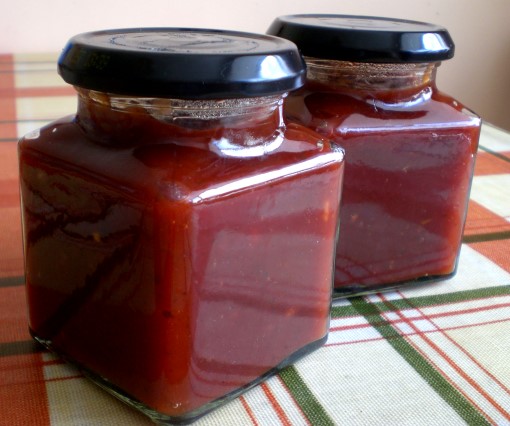 The finished ketchup was just perfect on a honey cured bacon (see below) sandwich for a late Sunday breakfast - sweet, spicy and tangy - there's nothing wrong with the ordinary ketchup that this was at the beginning, but the end result is really quite special. 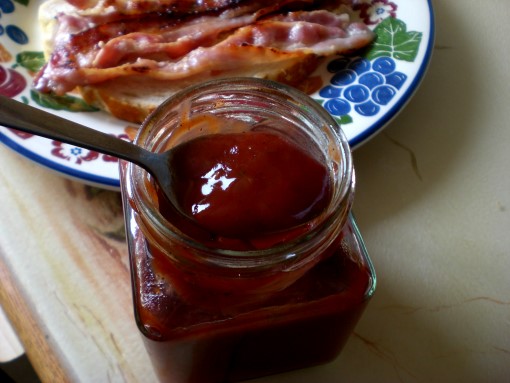 Now, we're going to upgrade some cheap, basic streaky bacon by honey-curing it. 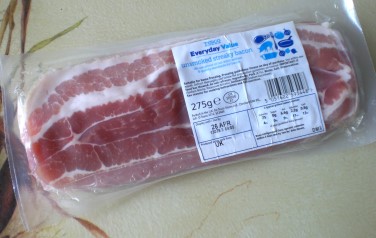 Cheap bacon tends to be a bit wet (as water bulks up the weight) and heavy on the salt (as this extends shelf life), but these things aren't necessarily disastrous - and there are ways to make this into something really nice. 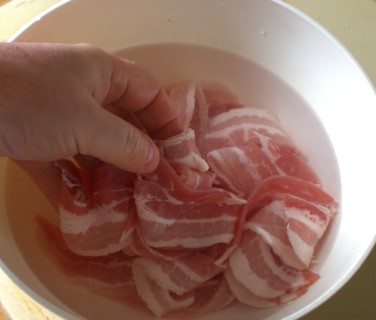 From previous experience (when I made my Bacon Easter Egg), I happen to know that this bacon is exceptionally salty.

So the first thing I did was to separate the rashers and wash them - just swishing them around in a bowl of cold tapwater, then draining in a colander. 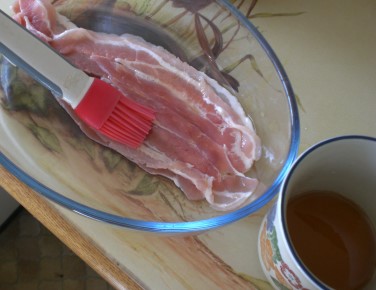 I warmed a tablespoonful of honey in a cup in the microwave, to make it runny enough to brush onto the bacon.

I brushed each rasher with a layer of honey as I stacked them into a glass dish. I covered this with plastic film and put it in the fridge for 24 hours.

(Maple syrup would have been an option here, except that I didn't have any, and it's expensive - which would defeat the purpose of this series). 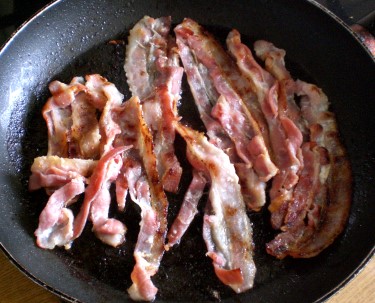 The next day, I fried the bacon for a late sunday breakfast - it crisped up and caramelised quite nicely, although halfway through cooking, it ws necessary to drain off the liquid that came out.

That's fairly normal for cheap bacon anyway, as it often has a higher brine content, but I guess it also probably picked up some extra water when I washed it. 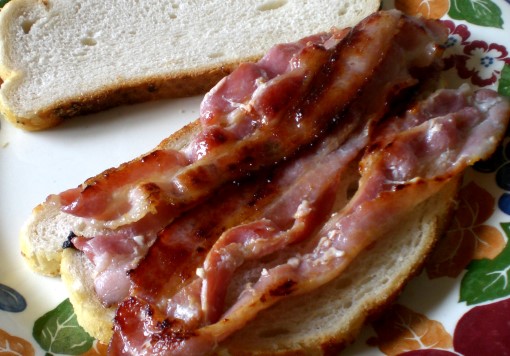 The honey cured bacon was the other upgraded item in my sandwich for a late Sunday breakfast - seasoned with my upgraded tomato ketchup.

The bacon was great - the sweetness of the honey, especially when caramelised from frying - delicious, and definitely tasting like something significantly above its original price point. 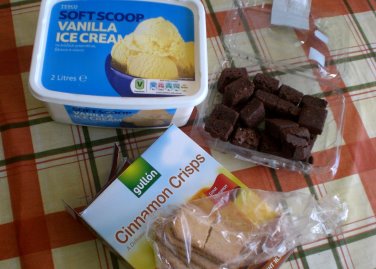 Here's what we're starting with - a 2 litre tub of cheap vanilla soft scoop ice cream, a 300g pack of chocolate brownie bites and half a dozen thin cinnamon biscuits.

Cheap ice cream tends to be a bit plain and ordinary - but that's ideal as a base for other flavours!

The ingredients haven't really anything much in common with those of 'real' ice cream (which is just cream. eggs, sugar and flavouring), but even so, it's not a terrible product to begin with - just a little basic.

I like the combination of vanilla and chocolate flavours with a hint of cinnamon, but could have substituted almost anything else here - white chocolate chunk cookies or oat and raisin - maybe even bourbon creams. 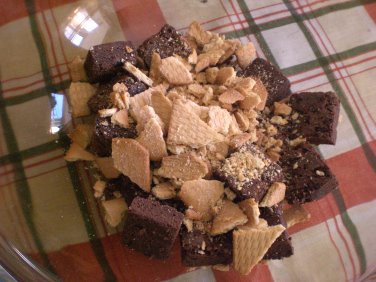 I put the brownies in a large bowl and broke up the cinnamon biscuits on top.

I spooned the ice cream on top - scooping it out of the tub in thin layer-like slices, so it would be easy to break up and mix with the added ingredients. 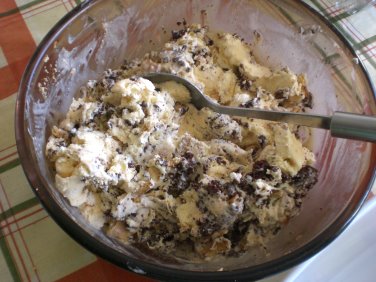 Working quickly, so it didn't melt too much, I chopped the ice cream and brownie pieces together roughly with a large spoon.

I stopped when the pieces were fairly well mixed in, but not completely broken up and blended - it's nice to have chunks in this sort of ice cream. 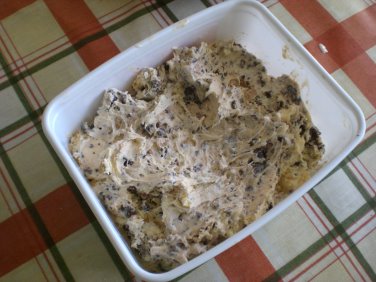 I packed the mixture back in the original tub. If I'd been trying to pass this off as homemade from scratch, I could have packed it into a smaller, pre-chilled bowl.

It's interesting to note that despite adding quite a lot of extra ingredients to the ice cream, the final volume is only about two thirds of a tub - this goes to show how much air is whipped into soft-scoop ice cream.

Fortunately, working out some of the air has made the ice cream denser and creamier-tasting anyway, so it's all good. 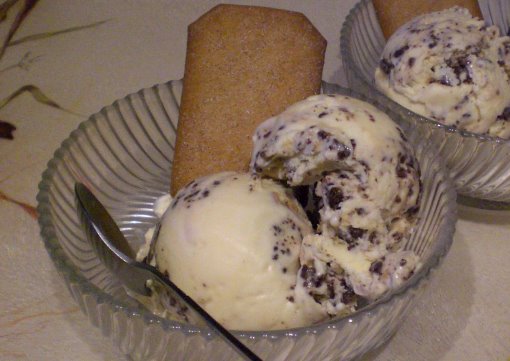 Delicious - admittedly, not quite on a par with that expensive branded ice cream you can buy in little cardboard tubs, but still tasting well above its price.

The brownie and biscuit pieces absorb some of the moisture of the ice cream and turn delightfully doughy, but still with enough of a chunky, crunchy texture to keep it interesting.