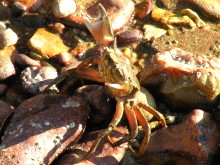 July 15 2007 - OK, I've been talking about my intention to try eating shore crabs, but today was the day I attempted it. We went crabbing down at the pontoon at Manor Farm Country Park - our lines were baited with bacon, plus some bits that I found lurking - past their date - in the fridge; a bit of old pate and a chunk of cooked sausage. This was all stuffed into those little net bags you get with laundry detergent tablets - along with a couple of stones for weight - and these were tied onto the crab lines. This works better than the fishing hook provided with the lines, as the crabs can't remove the bait (and the risk of hooks stuck in thumbs is eliminated). 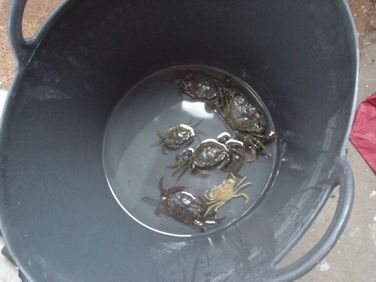 We caught about a dozen crabs - four tiny ones, four of average size and four monsters in excess of 100mm across. We'd have stayed to catch more, but a sudden thunderstorm came out of nowhere and we had to dash for cover.

I took pity on the smallest crabs in our catch and let them go, so we returned home with only eight. 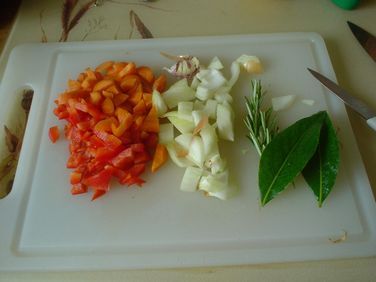 I left them in their water in the garage for a few hours, in the hope that they would 'purge' a bit, then I began cooking. I roughly chopped an onion, a couple of carrots, a bit of red pepper, a clove of garlic and to this I added a couple of bayleaves and some rosemary, from the garden. 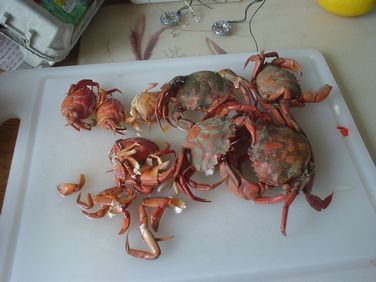 Then I put a large pot of water on to boil and cooked the crabs for two minutes or so, then removed them and let them cool a while. Lots of legs broke off during cooking, but not because the crabs were jumping around (they don't - they just stop moving - dead - the moment they hit the water).

They turned red, as expected, but this revealed quite a lot of algal growth on the top of the carapaces, so I removed all the legs and put them in the soup pan (not the one they were initially boiled in), then I scrubbed the algae off with a brush 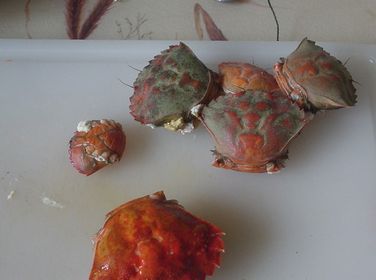 I cracked the legs that were in the pan by bashing them with the end of a wooden rolling pin, then I chopped the main shells in half and removed the gills and digestive systems, then added these to the pot, smashed them up a bit more, added the veg, some paprika, a bit of fish stock powder and a slug of cognac and covered with water and simmered for about half an hour.

My camera didn't record the photos properly for the cooking process, but it all went as planned - after half an hour, I strained the liquid into another pan, then simmered it until it was reduced by half.

The end result was pretty good - so much so that it was only when I'd nearly finished my second bowl, I realised I hadn't taken a photo, so here's what it looks like nearly gone! (the black specks are ground pepper) 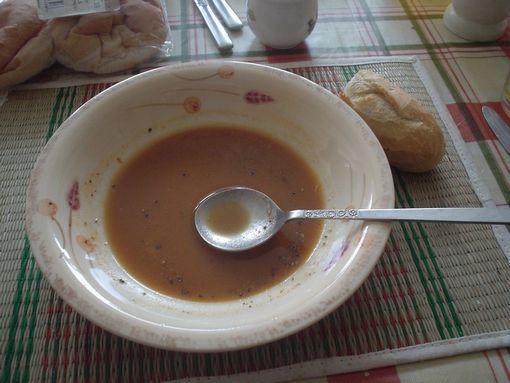 The flavour was quite subtle, but definitely crabby and not bad at all for a first attempt - I think I'll be doing this again - maybe adding a bit of cream next time.