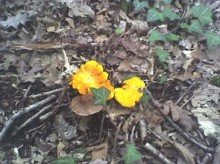 We were out of a walk at manor Farm Country Park and not 100 yards away from where we caught the shore crabs last Sunday, I spotted a flash of bright yellow amid the leaf litter off to one side of the path.

On further investigation, my hopes were confirmed - it was a little patch of Chanterelles. 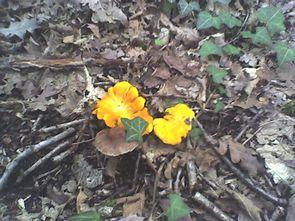 I picked them and carefully put them in a plastic bag - this is not ideal, but it's all I had (I always carry a clean plastic bag or two in my wallet) - leaving mushrooms in plastic can make them 'sweat' and decay very fast - fortunately, they weren't going to be given time for that.

I got them home and spread out my haul on a square of kitchen roll: 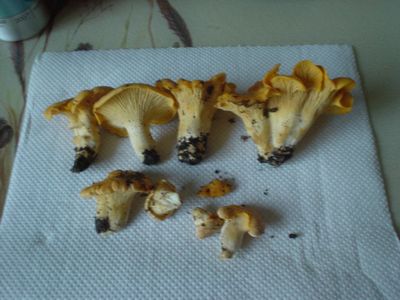 Not bad - one great big multi-stemmed one, four others of decent size and a few little tiddlers.

You can take the mushrooms out of the forest, but taking the forest out of the mushrooms isn't so easy - it took quite a while to prepare them - brushing out the specks of dirt and debris from between the gills and carefully wiping the caps with kitchen tissue (mushrooms should never be washed - it just ruins them).

Then I sliced them up and put a couple of slices of bread in the toaster. 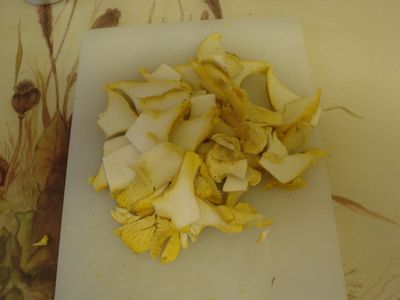 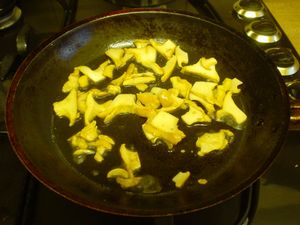 By the time the toast popped up, they were done. So they were served unseasoned on a slice of buttered toast. 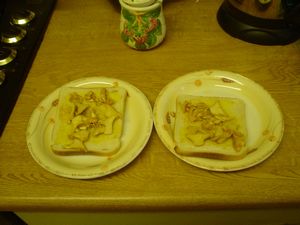 They were excellent. Firm, yet tender and juicy, the flavour is rich, earthy and mushroomy, yet delicate at the same time. I'll pop back there in a few days and see if any more have come up.

"Isn't it terribly dangerous?" is the question people most often ask me when I talk about eating wild mushrooms.

"No, it isn't dangerous at all" is my stock answer.

The reason it isn't dangerous at all is that I know exactly what I'm doing. I don't mean that to come across as big-headed or anything like that - what I mean is that I'm not actually taking any risks, because I'm not doing anything at all that I don't understand, or to put it another way; if there's anything about which I'm doubtful (in the context of gathering mushrooms), I just avoid doing it.

I'm not by any means an expert mycologist - I can identify quite a few species, but there are thousands and thousands of them - far too many for me to know them all.

So how can it possibly be safe?

The answer is surprisingly simple - I limit myself to seeking out any of perhaps two dozen of the best edible species - anything else I find, I might try to identify, but it doesn't matter if I'm right or wrong, because I won't be eating them.

So it's quite easy to become very acquainted with the identity of the dangerous ones.

Similarly, there are perhaps a few dozen important edible species (OK, maybe more), of these, maybe half are really, really easy to identify - and the Chanterelle is a case in point. There's almost nothing that it can be superficially mistaken for and if you're doing the identification process properly, it's actually impossible to mistake anything else for a Chanterelle - Completely impossible.

It's possible to find things that look a bit like Chanterelles, but you're not sure. So you just leave them alone. Simple.

Proper identification is important and this should include checking off and matching all physical attributes of appearance, texture, smell, colour, shape and details of form, as well as season and habitat. If you check all the boxes, and just leave alone anything about which you are even slightly doubtful, the risk is too small to be worth a mention.

That's not to say wild mushrooms can be gathered carelessly (so read the disclaimer below!), only that there need be no real mystery about it.