In this article, we'll take a look at feral apples - including a tree I found a growing on the waste ground behind my workplace, plus a handful of others I found in a small copse behind the public park. 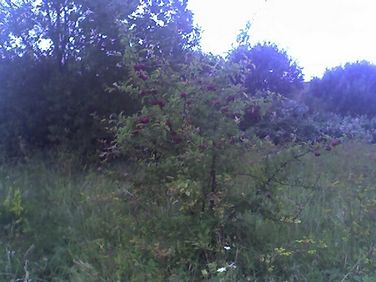 Here's the tree I found behind my workplace in Portchester - It's only about ten feet tall and looks like it's maybe a dozen years old, so I expect it took root when one of the lads from the warehouse threw an apple core out on the grass.

The apples are pretty small - the biggest being a little smaller than a tennis ball - but they're perfectly formed - nice glossy red fruit with green and yellow flecks - their heritage as the feral offspring of a cultivated variety is quite obvious to see. 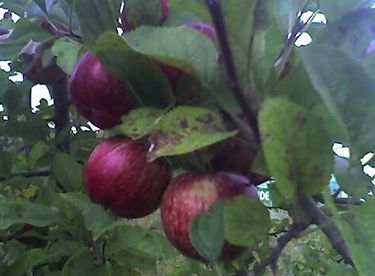 I just picked three - one for me and one for each of my kids, who came to visit me at work. We took them back to the office and cut them up - to make sure there was nothing living inside them - they were OK - a little bit hard (maybe not actually fully ripe yet), but quite juicy and pleasantly tart, but also sweet. 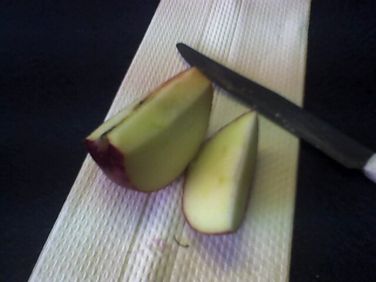 Although there are such things as true crab apples, many of the 'wild' apple trees we see are the naturalised offspring of cultivated varieties - either chance seedlings from a discarded core, or perhaps remnants of derelict and forgotten orchards.

They're quite a common sight alongside railway tracks (including disused ones) - along with other fruit trees including plums and the occasional pear - I read somewhere that this was attributable to discarded cores and pips from fruit consumed by passengers (and perhaps track workers) as far back as Victorian times - where, in the absence of chocolate bars and plastic triangular packages of dodgy sandwiches, fruit was a convenience food.

September 2013 - I've been out collecting mountains of feral apples to use in the cider press I just made.

These apples are the chance offspring of discarded fruit or thrown apple cores - and they can be quite interesting - let's take a look... 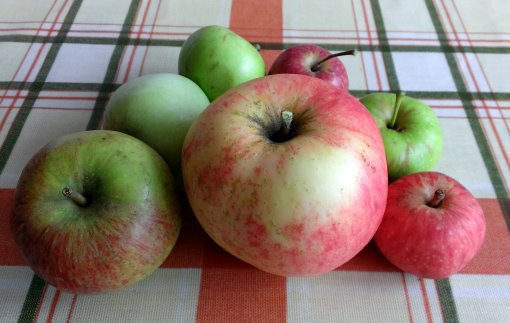 Six apple trees, six very different forms of fruit. Apple purists will tell you that seedling apples are never exactly the same as their cultivated parents - and they're quite right - but this isn't necessarily a bad thing.

It's true that the named, cultivated varieties of apple we have are often the result of enormous effort in selective breeding, and as a general rule, feral apples are usually smaller, harder and more sour than their parents, but just occasionally, they can be amazing - and even when they're not, they're still interesting. 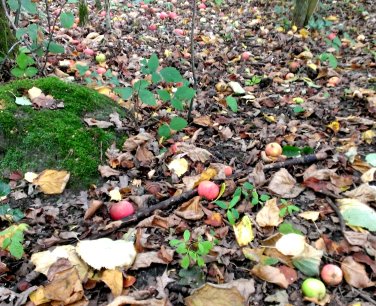 Most often, you'll find feral apple trees either by noticing the fruit on the tree - in a hedgerow, beside a footpath, on a river bank or roadside - anywhere that people go - anywhere that someone might have dropped or thrown an apple or its core.

Or you might notice the white and pink blossom in spring - and make a mental note to revisit in the autumn.

Or, as in this picture, you might happen across an apple tree growing tall and slender amongst other trees in mixed deciduous woodland at the time when the fruit is fully ripe - and you'll notice it on account of all the apples on the ground. 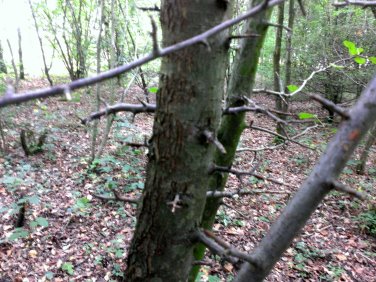 The branches and trunks of feral apple trees are often almost thorny - these are the remnants of twigs and fruiting spurs - on the trunk, they remain from when the tree was smaller - but they often clothe all of the branches and make picking the apples a scratchy, difficult business - and climbing the trees is almost certainly out of the question. 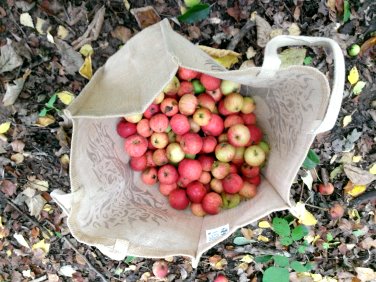 Fortunately, there's a solution - especially if the fruit is fully ripe.

Just shake the tree. Keep your head down, grasp the trunk or a large branch and give it a good, long, firm shake - and it will be raining apples!

(If they're really big ones, this might not be such a great idea, unless you want to discover gravity all over again) - the other distinct possibility with larger apples is that you may dislodge a big, rotten hollow one that is inhabited by many wasps - and this could be an unpleasant surprise if it fell on you - proceed with caution, I suppose.

A Closer Look At My Feral Apple Harvest

These apples are all the offspring of fruit or cores discarded by people - and although they are different from the parent fruit, there will be some residual similarities - so let's take a look and see if we can work out the identity of the parents for my harvest of apples.

One thing that helps to narrow down the identification process is the fact that the parent fruits will very probably have been common or popular commercial varieties of eating apple - the varieties to be found in any fruit bowl or lunch box. 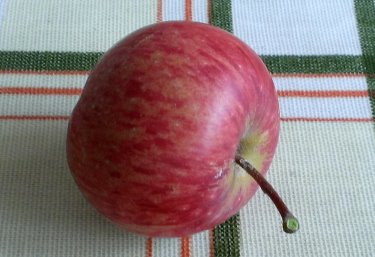 This one is from the same tree as the feral apples at the top of the page - I don't work there any more (in fact nobody does - the place closed down and is now derelict), but I went back and helped myself to a bag of free apples.

These are hard, green-fleshed apples - small, at around 6cm in diameter (although apples are small in general on nearly every tree this year). they have a deep, cherry-red colour over about three quarters of their skin.

I suspect the parent of this tree was a Braeburn apple. 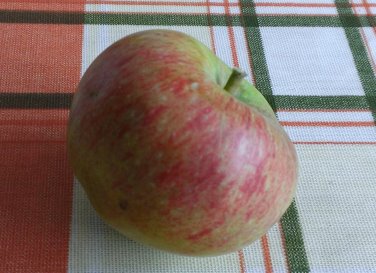 I found this rosy-cheeked, broad-shouldered apple growing in the park - quite close to some seats.

I suspect this one grew from the core of one of the Cox type apples. 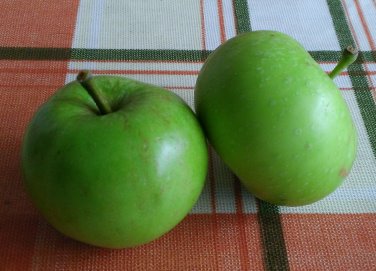 (I suppose that would make it 'Father Smith'). This glossy green, apple-green apple has the unmistakable shiny roundness and acid, juicy green flesh of a Granny Smith (although it is considerably smaller).

This is further confirmed by the sprinkling of paler green speckles, conspicuous on the top of the fruit, but fading out around halfway down. 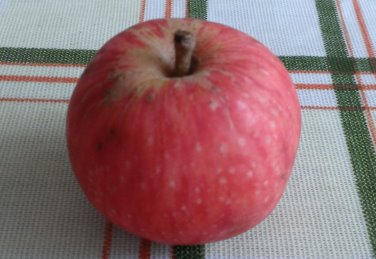 This one has the pale yellow, soft flesh and pale red and yellow skin that suggests it is the offspring of Gala. It has the light, slightly hollow feeling of that variety too. 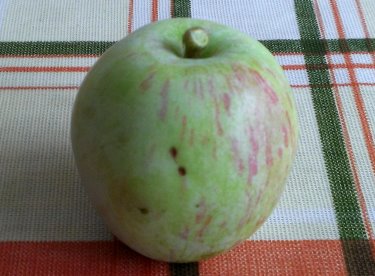 Not very sure about this one - fruits that are longer than they are wide, tapering conical shape, just a little flush of red on one side, and noticeable white waxy bloom. 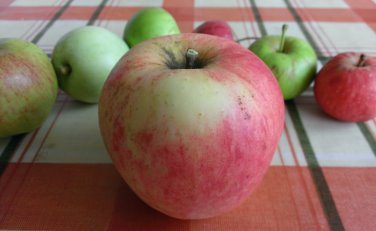 The tree producing these huge apples is in a hedgerow just up the road from my house - the fruits are so big and well-formed, I could almost believe someone just planted a cultivated variety there in the hedge (I should go back and look to see if this is a seedling, or if there is a noticeable graft union).

These are similar to Worcester Pearmain - big and firm, yellowish skin flushed with pink - flesh crisp and juicy, with a pinkish tinge.

These apples all have their interesting and unique features - and that's one of the things I do like about feral apples - the pot luck element of flavour, texture and size - they may not be the same as their parents, but they're generous with their surprises.

They're all going to be put in the mix for pressing in my recently-constructed cider press.

How Come You Always Cut Your Apples With A Knife?

Variety of flavour and texture aren't the only surprises to be had from feral apples - where they are essentially wild-growing, nobody is spraying them with pesticides, or in any other way managing the trees, the apples may contain larvae such as here - this one has been attacked by the larva of a Codling Moth - not something I want to discover by just munching on it.

Mike, if you go into full Cider Press production mode do give me a shout, I can bring over a whole tree full of rosy reds. They are just starting to fall so pretty much need collecting in the next week or so, or will end up as wasp fodder as they do ev