Building A Boat - Page 9 - The Relaunch Of The Snow Pea

My little boat now has an outrigger for better stability - time for a relaunch and test paddle... 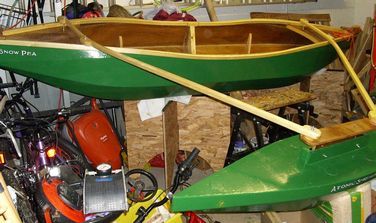 06 November 2007: Well, here it is - I dry-assembled everything in the garage this evening - it all fits together fairly easily and when assembled, seems pretty rigid.

I'm a little bit concerned about the weight of the outrigger assembly, but some of that was just the leverage of trying to rock the boat on its trestles - the outrigger can't possibly be heavier than water... It can't be...

(Please feel free to contact me if you want to pay me enormous sums of cash to see your logo featured somewhere on the Snow Pea - admittedly, sponsorship is probably easier to attract to projects with a bit more successful a track record...) 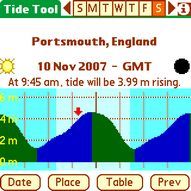 Saturday 10th November Will have a good, high tide right in the middle of the day - this should make it easy to get the boat into the water.

No elaborate journey plans this time - this is just a test of stability, flotation and manoeuvrability - I plan to get everything down to Botley Quay for about 11AM - it only takes a few minutes to put together, after which I'll be trying to paddle the boat around a bit, as well as judging which height adjustment settings are correct for levellng with one adult(me) or with an additional person on board. 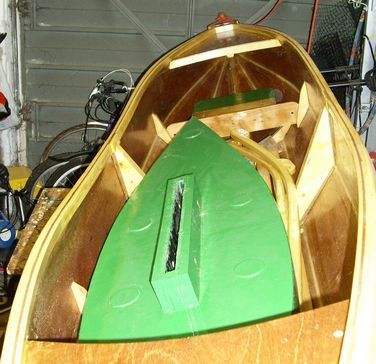 Still having reservations about whether it will be possible to turn the boat away from the outrigger, but there's no scope for last minute changes now anyway, so I'm just going to run with what we have and see what happens.

When it's disassembled, everything packs down inside the boat for easy transportation - So I'm going to pretend I planned it that way. 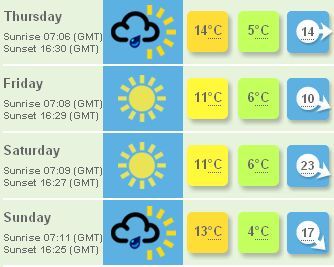 08 November 2007: Still looking good for relaunch - the BBC 5 day forecast is promising a sunny day - as long as that rain forecast for Sunday doesn't slide into Saturday...

Monitoring the five-day forecast has made me wonder if there's actually any point to it at all - the forecast for Saturday has changed - as the week progressed - from sunny to cloudy, to showers and eventually back to cloudy with sunny spells - and the actual weather was sunny without a cloud in the sky. Hmmm... I wonder if it's actually based on any meteorological data at all - seems they could just make it up, for anything beyond the next 24 hours, anyway, as they can just change it when it gets closer.

My curiosity eventually got the better of me, over the accuracy of the five day weather forecast, so I decided to check it. You can see the results here.

At last! The Snow Pea hits the water, and stays the right way up!

It was a crisp sunny autumn morning, a bit breezy, but we got everything down to the river for 11AM. It took me about ten minutes to bolt everything together. I put the outrigger on the topmost setting and, with a bit of assistance, got it all into the water 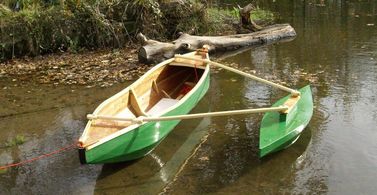 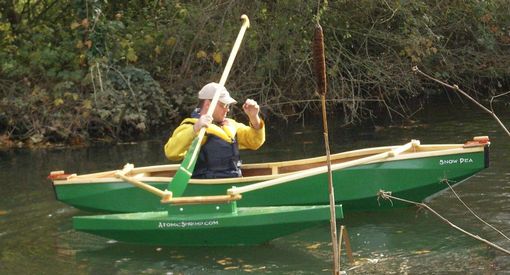 Then I waded out into the icy water and climbed aboard. This time, stability wasn't even a hint of a problem. Interestingly, it turns out that the topmost setting of the outrigger is the only one that will work - as it was just right - leaning toward it a little when unladen, and pretty much level with me (or me + a child) on board. 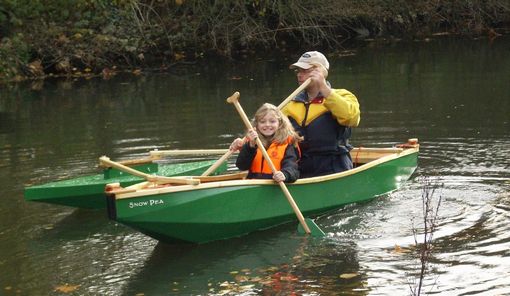 Balance simply isn't a problem - in fact I was able to shift from seated to kneeling position while afloat. I'm pretty sure I could even stand up in there, with just a little care (but I didn't try this)

My fear that the outrigger might drag the boat around in inescapable circles was not realised - it's quite possible to turn either way.

Going in a straight line is actually the challenge - some of this will come with practice though, but it's still a really short boat in the water and it seems easy to oversteer, then overcompensate. I might build a double kayak-style paddle to make it easier to react.

I think it might also be possible to steer by leaning - toward the outrigger should make it dig down and slow that side, but this only occurred to me on the way home.

Both of my kids took a turn in the boat with me - I think we need to master the co-ordination of paddle strokes, as that might have been what was spinning us about.

Still, despite the steering challenges, we managed to paddle it about in more or less a deliberate fashion - going against the current isn't at all easy though, so this will have to be carefully considered when we plan an actual trip (next year)

Every silver lining has a cloud 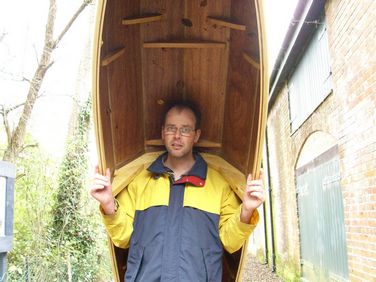 There was just one tiny problem. The trolley I built to transport everything down to the river - it broke as we were loading up to go home; fortunately, some friends who were present loaded the outrigger, paddles, decks and all the other paraphernalia in their car for me, and I carried (it's called 'portage') the hull home on my shoulders.

That central rib came in handy for this as it just fits my shoulders - and I was able to carry it home on my back (it's about a mile or so) with little discomfort.

Video of the relaunch

Here it is! - as you can see, the Snow Pea is now ridiculously stable.
What a relief!

(In case you're wondering, the docking on that log right at the end of the clip is completely intentional)

This is an edited selection of clips from the relaunch day. (you can see in this one that it's tricky to keep the boat tracking straight - I think I might need a rudder...)

Packing away for the winter

What I'll do now is to wipe the boat over and it to dry out completely in the garage, then rub down and paint/varnish a few of the scuffed spots on the hull, then pack all the parts inside the boat and hoist it up to the garage roof until spring.

What was good about the project?

It worked. It actually worked! In the end.

And I followed it all the way through - which isn't often the case with grand schemes that pop into my head.

What was not so good about it?

It's taken a lot of my time - much more than I originally thought - toward the end of the build, I could tell that my family's patience was wearing thin.

It's also made a fair bit of mess - I reckon I've made enough sawdust and shavings to fill the boat several times over, some of which inevitably gets trodden into the house - which hasn't been popular.

Chiefly, I've learned that it can actually be done - a complete novice to boatbuilding with average woodworking skills and modest resources, can actually (eventually) make a serviceable watercraft.

Practically, I've learned a couple of new and useful skills - working with glass/epoxy and glue lamination, for example.

(Still, if I'd done all that, I wouldn't have ended up learning it)

How much did it cost in the end?

I don't know - I stopped keeping track at about &pound;140, but that was when nearly everything had been bought - I'd estimate the total materials cost coming to somewhere around the &pound;160 mark.

Was it worth it?

Definitely. It hasn't always felt like it, but I'm happy now - and I'm really looking forward to taking the Snow Pea out for a proper trip next spring/summer.

What's the next project?

I don't know. Probably a few mundane things like shelves and bookcases, but I also have a plan hatching in my mind... I want to build a machine that can paint pictures... more on this later...

In the week following the relaunch, cleaned and inspected the hull (it's surprising how many nicks and scrapes a painted wooden boat sustains even on a little outing like this) - I rubbed down and touched up the paint and varnish where required, dried everything out, stowed all the bits inside the boat and hoisted it up to the ceiling in the garage - there to stay until the spring.