« No Such Thing As A Free Lunch? - Exploring The Solent Shore - From Stoke Battery To » 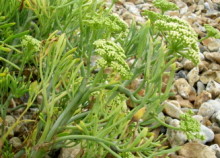 What is Rock Samphire?

Crithmum maritimum - An umbellifer (related to carrots, parsley and fennel) - found on stony beaches and cliff faces - sometimes growing directly from crevices in rock, the plant has flat heads of greenish-yellow flowers and succulent, fleshy leaves that have a strong pungent odour when crushed - it has been described as smelling like varnish or turpentine, but I think it just smells really, really, strongly of raw carrot. 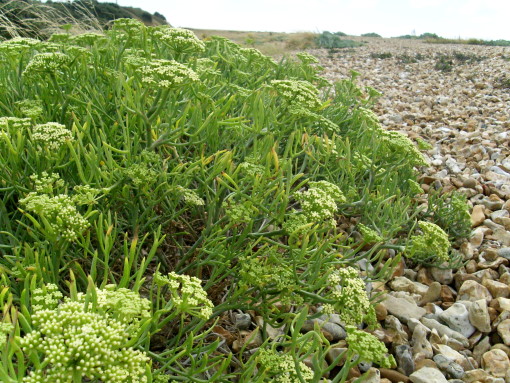 Because this other plant is often found growing straight out of the rock, it was known as St Peter's Herb - Herb Saint-Pierre, and over time, this was corrupted to Herb Samphire. The superficially similar (but not closely related) Marsh Samphire was named after this plant, because of its resemblance and similar uses.

The plant is at its best in spring to early summer - later on, it can still be used, but a bit more discernment will be needed so as to gather only the crisp, fresh green growth and not the older material which may have become stringy or woody. 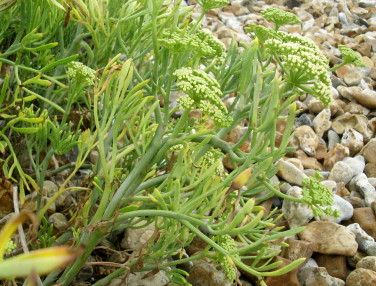 The side branches should snap off very easily by hand - if they're at all difficult, it means the plant is too aged to be worth collecting.

This plant can be found growing in dangerous places such as cliff ledges and rock faces - care should be exercised in the collecting - look around and find some plants growing in a safe location, rather than endangering yourself in pursuit of a vegetable.

Rock Samphire As A Wild Food

Rock Samphire is a common coastal plant in Southern Britain - occurring on shingle beaches and rocky cliffs - it was once so sought-after that people would undergo serious risk to obtain it - and it was not uncommon for foragers to fall to their deaths from cliff faces when trying to pick the stuff.

Its use has fallen out of popularity nowadays, and so it can be picked from more easily-accessed places without resorting to such extremes.

The plant is most commonly used to make an unusual pickle. To begin, the leaves are soaked in salted water for about an hour. 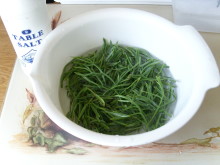 Next, the leaves are picked off and the stems discarded. 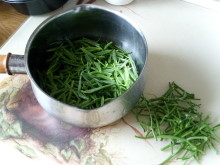 The leaves are boiled for about ten minutes, then packed into a jar They will be immersed in a pickling mix consisting of two parts vinegar to one part water, which has been simmered together with some pickling spices and a little sugar, then strained and cooled. 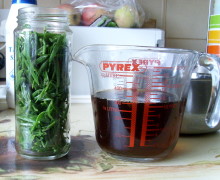 And there's the finished product - I only made the one jar as I haven't tried this before - if it's any good, I'll make a lot more next year. 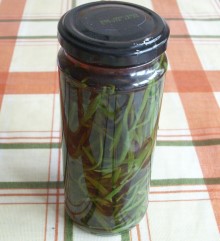 Unfortunately though, I have to wait four months for it to mature before using it. Oh well - maybe I'll use it with some cold meats on Boxing Day...

Update (Much Much Later)

It's a good, robust pickle - not exactly similar to capers, but equally powerful, and probably usable in many of the same ways - more as a culinary seasoning or spice than as a table pickle.