Starting on 01 December 2009, I carried on collecting every dropped coin I saw, but this time, I'm saving them up in a jar.

...I'm hoping to fund all of next year's Christmas dinner with money I picked up for free.

I'll post the running total here at the end of each month. 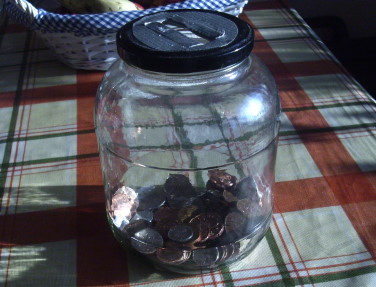 At the end of the first month, I've managed to find £2.53 in loose change (that's it in the jar above) - a fantastic start!

The fund so far is composed of an assortment of denominations from 1p to 50p - a total of 113 coins - that's an average of about two coins found per day. 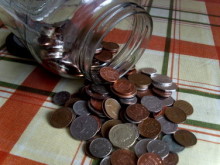 In the three months so far, there has not been a single working day where I have returned home without having found at least a penny. 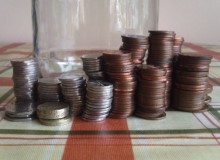 I thought that February was exceptional, but March was better still - the fund now totals £16.73 - having increased by £6.76 this month, still finding some money on every single working day (and a couple of occasions on the weekend too)

The denominations of the coins I find seems measurably affected by location, time of day and even the weather - I'll say more on this later, maybe.

Wheeeee! look at this! I found a ten pound note this month - just lying there on the flagstones, with everyone walking past it, oblivious.

So along with the usual assortment of coins that makes a total of £15.78 this month, bringing the total to a whopping £32.51.

I suspected this day would come - after five and a half months during which I found money every working day (and quite a few weekends), I returned home empty-handed for the first time.

I think pickings are thinning out a bit in general - maybe the lighter mornings and evenings are making dropped coins easier for other people to spot, or maybe people aren't having to fumble under heavy coats to put money in their pockets. 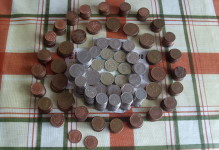 Another smashing month - I found a five pound note screwed up in a ball with some litter.

Finds of paper money are pretty exceptional, so I think the average is probably running a bit high at the moment - it seems most likely that the end total will be a figure that falls somewhere between minimum and average - so between £60 and about £85. Would be nice if it went as high as £100. 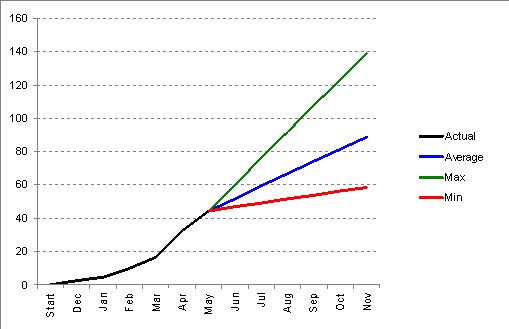 Do you stop to pick up dropped coins?

Is there a lower value limit below which you won't stoop to pick it up?

If it's just a penny or two, do you drop your change on the ground to save the bother of pocketing it?

These are the things I need to know.

How And Where To Find Lost Money

I've even surprised myself at the number of dropped coins I'm finding - I do walk quite a bit though - about a mile in either direction to/from the train station each weekday and an hour long walk in Portsmouth city centre most lunchtimes.

Prime locations for found money tend to be:

-Essentially, anywhere that anyone might find themselves with small change in hand, and be preoccupied with eating something, or doing something. 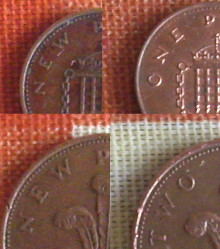 New Is The New Old

In 1971, Britain switched to decimal currency - the new coins were distinguished by the marking 'New Penny' or 'New Pence'. In 1982, the 'New' wasn't really new any more, so it was dropped.

I've got a mixture of copper coins here from the 1970s onwards. The silver (coloured) coins will all be newer, because 5, 10 and 50p coins have all been resized some time after decimalisation. 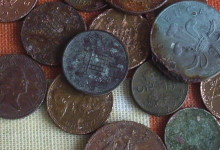 Because I'm picking up money off the street and out of the road, I'm not being picky - some of the coins I've found are only just recognisable due to wear and tear or corrosion. I'm not sure if this is going to present a problem when I try to bank them.

I found a few foreign coins too - the latest of these an American Dime and a Netherlands 5 Euro Cent - which happen to closely resemble 5p and 1p coins respectively - I mistook them for these when I first picked them up. 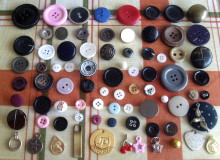 I've been conditioning myself to spot small, round, bright objects, but this sometimes gets triggered by other things that aren't coins - most of these false positives aren't worth picking up (more on that later), but if it's a button I spot, I usually will pick it up - here's what I've found so far:

Chocolate Buttons looks like tarnished pennies from a distance.

Spots of chewing gum on the flagstones are often misleadingly circular - and after rain, bright to view,

Squashed crown cap bottle tops look like £2 coins - I've lost count of the number of times I've nearly picked up one of those.

Metal pavement markers - on some city streets, the pavements have a row of little metal discs fixed down to them - I think these are to indicate the maximum extent to which shopkeepers can stack goods in front of their stores. 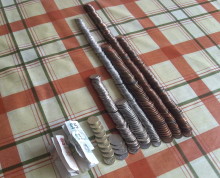 I continued to find money every working day and most weekends this month - including a wet, but perfectly good five pound note in a roadside gutter after rain..

Now, this gets quite interesting - plotting the number of coins/notes (y axis) found against their denomination (x axis), we get a graph that looks like this: 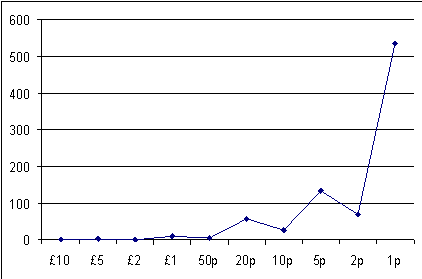 Almost a classic exponential curve - or at least, it would be, but for that rather patterned zig-zaggy look. Let's take a closer look at that...

Well, these four denominations are larger diameter coins than their neighbours in the graph. Bigger coins are easier to spot on the ground, don't pass so easily through holes in pockets, and make more noise when they hit the ground - all of this (I hypothesise) contributes to a generally lower find rate for these denominations.

Obviously this is just the same data, but a different way to look at it - and again, taking into consideration the dips in the graph - caused (I believe) by factors described above - we get a more or less steadily descending line - that is: although pennies are much more common than pound coins, they're not so common as to be collectively more valuable.

One more anomaly in this graph is the spike for 20p coins. I believe that is also explainable - in my experience, they're the least conspicuous coin - they have an intricate design, combined with a brushed matt finish that renders them less shiny or contrasty when they're lying on the ground - to the untrained eye (not mine), they're not very visible - so they tend to stay lost until I find them. 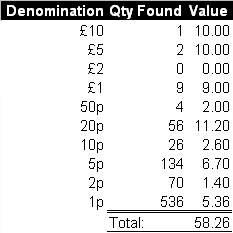 In case you're interested, here is the breakdown of finds. 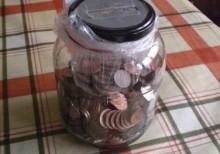 Again, I found money every working day and some weekends - another tenner this month - making it the most productive month yet.

To save the bother of recounting the whole jar each month, I added a plastic bag to cache the monthly find. 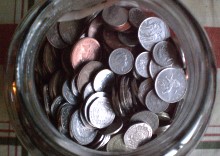 This is due in significant part to my being away on holiday for two weeks - I only found 12 pence in the whole fortnight.

Mostly small, apparently discarded coins this month, rather than lost money. Not really sure why. 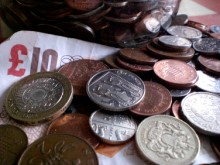 This is more like it! £16.80 this month, including my first £2 coin. The £10 note was a reward from the grateful owner of a mobile phone I found and returned - not quite found money, but I'm including it.

So the fund now stands at £98.07 - tantalisingly close to the magical ton - I think we should be able to get there in the next (and final) month of the project...

As November's cached fund reached around £2, excitement mounted, as this was to be the £100 milestone...

But something must have gone wrong along the way - and undetected as I've not been recounting the whole jar since July. The jar only contained £95.43 - that's £2.64 short of what I thought - meaning there was still quite a way to go, and only a couple of weeks to get there. 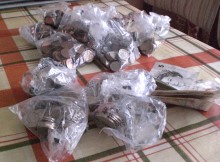 Time up! It's the end of November and that's a whole year of hunting money.

Once again, I found money every working day and most weekend days too. 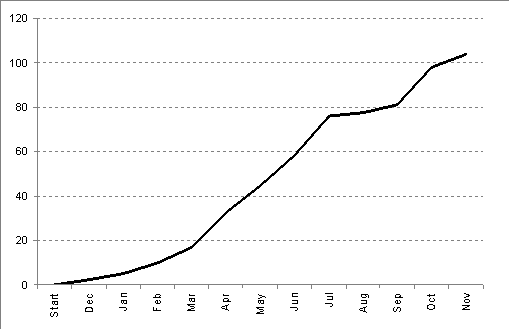 I was going to try to itemise every last little bit of spend. I did keep close track of it, to make sure everything for the table was paid for by the project fund, but the detailed list is quite boring, so I won't go into great detail. The turkey was the major conponent, costing £66 from the local butcher - only a 13lb bird, but a really good one - a fully free-range bronze raised in the New Forest - more like a game bird than poultry. 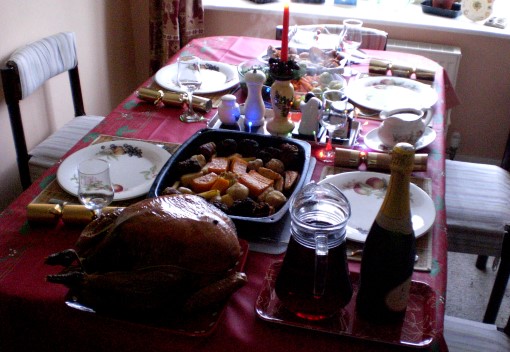 To go with our turkey, we had two varieities of stuffing, pigs in blankets, roast potatoes, parsnips, butternut squash, jerusalem artichokes, plus carrots, garden peas, Brussels sprouts and curly kale.