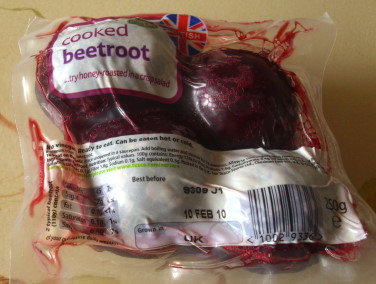 At the risk of attracting scorn, I am using cooked prepacked beetroot

I could have cooked and peeled some fresh beets myself, but this is a good product - the only ingredient is cooked beetroot - it's perfectly fine for this recipe.

For heaven's sake don't use prepacked beetroot that has been picked in vinegar for this though! 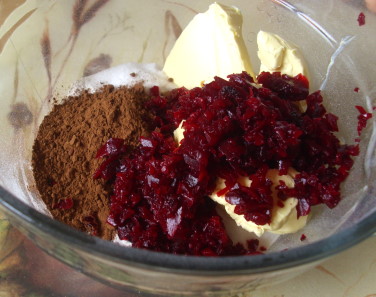 This is pretty much an all-in-one recipe - so, flour, butter, sugar and all of the other ingredients except the beetroot and solid chocolate go straight into a big bowl.

Then add the beetroot is after finely shredding it either in a food processor, by hand, or any other method that will reduce it to small shreds. 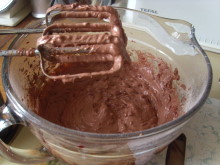 Blend the ingredients together into a uniform batter using an electric beater, or food processor.

It may still look lumpy at this point, but those lumps are little pieces of beetroot - and that's fine. 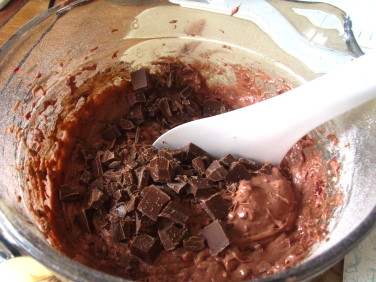 Chop or smash the solid chocolate into small pieces.

Add it to the mixture and stir in thoroughly. 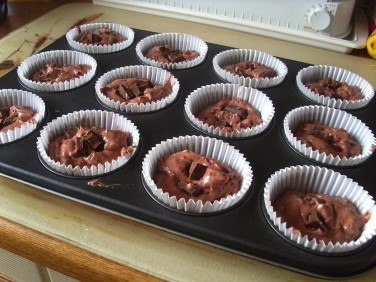 I also dropped a few extra squares of chocolate on each and pushed them gently into the top. 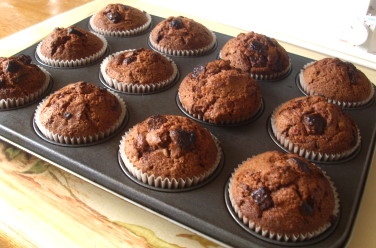 Bake in the oven for about 15 minutes, or until done.

(Test by pushing a clean wooden toothpick into the middle of one of the cakes - if it comes out clean, they're done.) 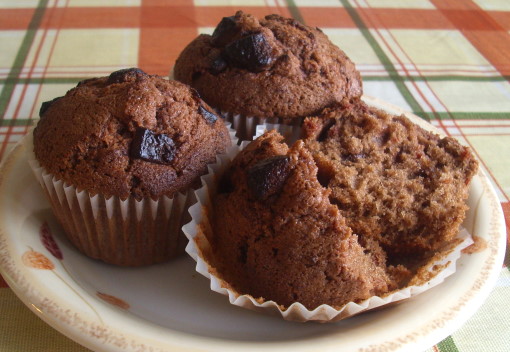 These muffins are great to eat just as they are, but can be transformed into a really special little dessert, as follows:

Slice a muffin in half horizontally and place both halves cut side up.

Carefully spoon on about a tablespoonful (half each side) of your favourite liqueur or spirit - I used the Bullace brandy I made earlier in the year, but you could use plain brandy, kirsch, crème de cassis, etc. It will soak readily into the cake.

Add a spoonful of Greek yoghurt on the bottom half, then replace the top.

Garnish with some grated chocolate and a few more drops of the liqueur. 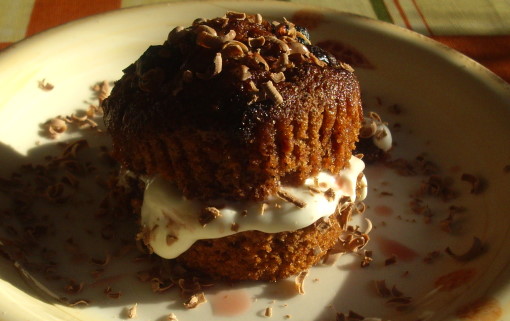 I tried this just because I was curious about the combination of flavours - so what does chocolate and beetroot taste like?

Well, perhaps surprisingly, it tastes mostly of chocolate. Although the flavour of the beetroot was quite discernible when I tried one warm, by the time the muffins have cooled fully, the flavour becomes quite unified and blended.

So, is it pointless then? I would say not.

You can't easily separate the two flavour components in the finished article, but the result is a rich and yes, slightly earthy, complex chocolate flavour.

So the beetroot acts here mostly as a flavour enhancer - making the chocolate taste more like itself.

This recipe is intentionally quite light on the chocolate - it doesn't suffer from this at all - I just wanted to test the chocolate / beetroot interaction in moderation.

I've seen other recipes containing mountainous volumes of cocoa, so I might try something a bit more powerful sometime...