Here's a recipe for a scrumptious apple dessert that can't make up its mind whether it's a pie, cake or crumble. 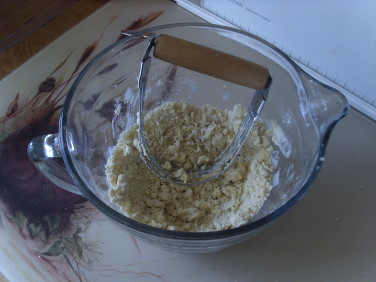 Make the base - put the flour, almonds and butter in a large mixing bowl and rub together with fingertips or a rubbing-in tool (as shown here). Continue until the mixture resembles crumbs. 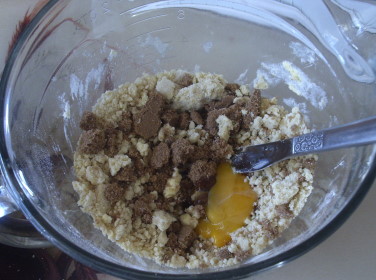 Add the sugar, almond essence and egg yolk and mix together with a table knife.

You don't need to be too thorough here - it's OK to leave little clumps of brown sugar in the mix. 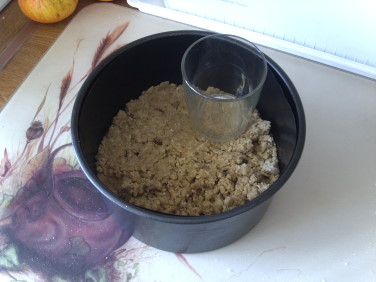 I've lined this cake tin with pieces of re-usable teflon baking sheet, cut to size - this helps to release the cake when it's cooked, but is not absolutely essential. 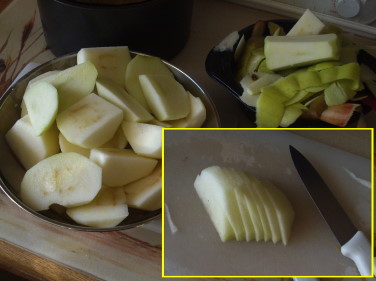 Add the filling - Peel the apples and remove the cores - slice them into thin pieces.

Repeat with more apples and more sugar until you've used both of the filling ingredients up. 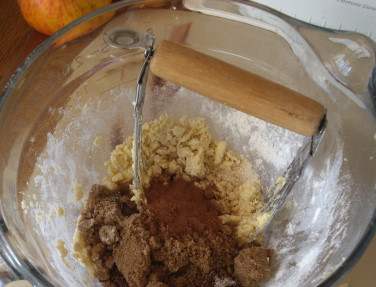 Make the topping - put all of the topping ingredients in a large bowl (the same one as the base mix - save on washing up).

Cut the ingredients together with a table knife, or rubbing in tool, until the mixture resembles crumbs. 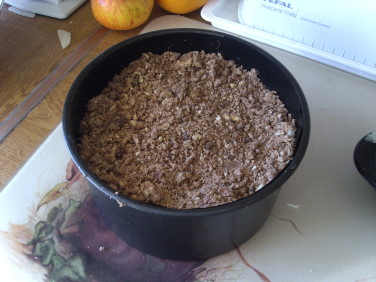 Spread the topping evenly over the apple pieces.

Bake in the oven for 40 minutes, then turn down the heat to 130 C and bake for a further 20 minutes.

The apples will cook down to about a quarter of their original thickness, the topping will partly melt and caramelise and the base will turn into a sort of soft, moist shortcake. 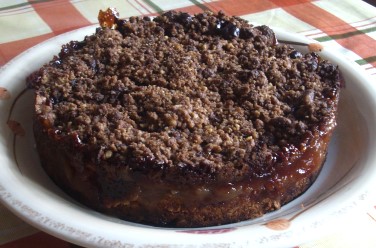 Allow to cool almost completely before pushing up the base of the tin to remove the cake - if you didn't line the sides, you might need to run a knife around the inside to free it up first.

Serve warm or cold, on its own, or with custard, ice cream or whipped cream.

This recipe calls for a single separated egg yolk - there are such things as tools to separate the whites and yolks of eggs - or you can do it by cracking the egg onto a slotted spoon and letting the white run through into a bowl below.

But probably the easiest way is to use the two eggshell halves - pass the yolk gently back and forth between the two shell halves, deliberately spilling the white out into a bowl or cup underneath.