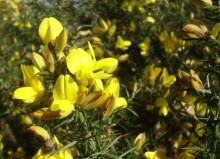 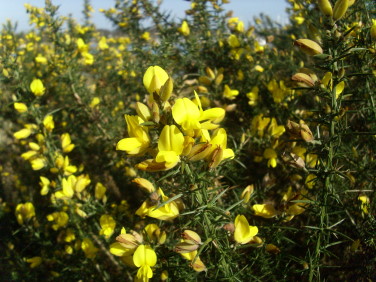 The bright yellow flowers are mostly produced in early spring, but it's nearly always possible to find a few at any time of the year - even in the depths of winter.

On the bush, they have a smell reminiscent of coconut or ground almonds. When you gather a bunch of them together in a container, a number of more complex, fruity aromas are noticeable.

They're supposedly edible in salads - but I've tried them before and I was quite disappointed - they just taste bitter and uninteresting. So I decided to try using them to make a tisane.

The plant is armed with such an impressive array of sharp spines that it really isn't possible to pick the flowers without suffering a few jabs and scratches - wearing gloves thick enough to fend off the thorns would probably reduce dexterity enough to make it much harder to pick.

Limiting the picking to only those flowers that are fully open does make it a bit easier - and these are the most worthwhile ones anyway - as they are at the peak of flavour and aroma when fully open.

I picked about half a pint of flowers (at the expense of a few painful jabs from the wicked thorns). 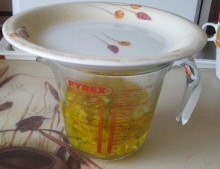 After leaving the flowers open on the plate for a few minutes (to let a few small insects escape), I steeped them in boiling water, covered with a lid, for five minutes.

I strained off the liquid and added a little lemon juice and a half teaspoon of sugar. (The lemon juice changed the colour from deep, vivid yellow to the paler shade in the photo below) 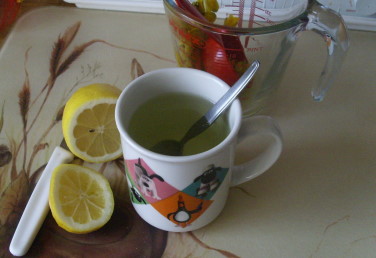 The resulting drink is good - slightly astringent, it has a fresh, fruity (almost melon-like) flavour, with a spicy resinous backnote, and a complex herbal aroma all of its own, which is difficult to describe or compare to anything.

It's great as a hot beverage, but it would also work well chilled and served with ice and a sprig of mint, I think

An excellent, refreshing drink. Worth the effort and pain of picking the flowers.