WDMD? - What Do Morons Drink?

21 February 2009 - What do morons drink? You may never have wondered about this, but I did, so I set about finding out.

How To Gather the Data

Clearly only a strictly limited level of co-operation and honesty could ever be expected from people who are... well... complete blockheads - so obviously a personal survey isn't going to work. What is needed is some kind of evidence-gathering methodology capable of identifying both factors - a significant level of idiocy, plus an indication of beverages consumed. 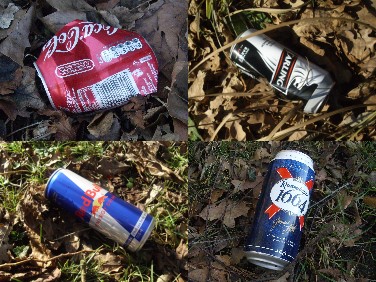 So here it is:

I decided to focus the study upon that category of slack-jawed goons who, on finishing their canned drink, are not endowed with the smarts to dispose of the container in a proper and civilised fashion, but instead just toss it to the ground.

I wandered around the streets and lanes of my local area and collected every discarded metal beverage can I found. 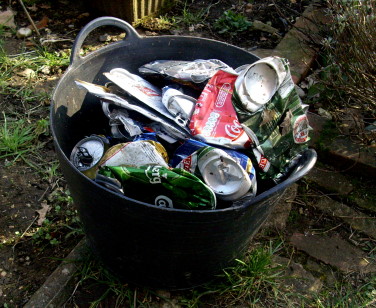 In the space of about an hour, I had collected exactly 100 cans - probably about the smallest reasonable sample, in terms of the different kinds of drinks.

About half of them were found lying within plain sight of a public litter bin - so I was satisfied that we are dealing with a group of really quite powerfully stupid boneheads.

I shook out any remaining contents or debris inside the cans and stamped them flat as I collected them - on returning home, I tallied up the different brands... 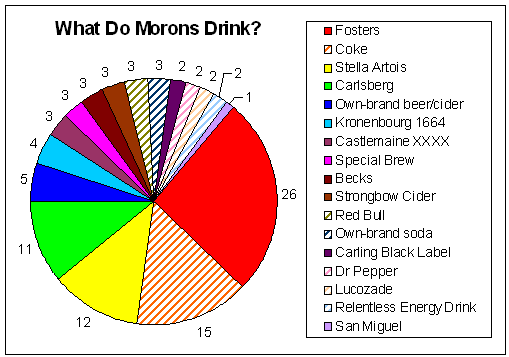 In this survey, Fosters Lager is clearly indicated as the favourite alcoholic beverage for dullards.

Idiots thirsting for a soft drink are likely to choose Coca Cola.

Proper Disposal Of The Cans 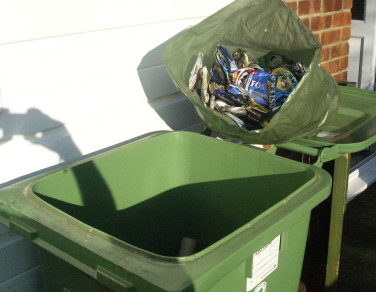 After the survey, the cans all went into my recycle bin - they'll be taken away and melted down for re-use.

Recycling Aluminium cans requires only about 5% of the energy required to smelt new metal from ores - the energy saved by recycling these 100 cans is approximately the same amount used in lighting my home for a month (although of course I don't personally benefit from it in that way).

What Does This Mean?

So... does this mean that drinking certain beverages will turn you into a dimwit? No. the data here could not possibly support any such assertion.

In fact, a little care is needed to ensure all kinds of unreasonable interpretations don't spring from this research. For example, there are plenty of other varieties of human stupidity that don't manifest themselves in the dropping of litter - what we can say is that it looks as though there are such things as favourite drinks for those kinds of dimwits that do drop litter.

There's truly no reason for anyone to take offence at the terms used and implied in this article.  Drinking any of these things does not make you a moron. littering does.

If you don't drop litter, then no offence is meant because none of this applies to you.

If you do drop litter, then no offence should be taken, because the article describes you as what you truly are - a moron.

Only you have the power to change that label - and it's not hard to do.