Here's a simple recipe for an outstandingly moist and delicious brioche tart - drenched with spiced syrup. 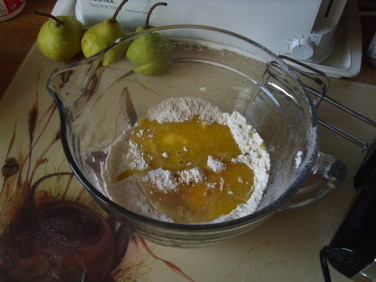 Place the flour, sugar (just 1 tablespoonful), yeast and salt into a large bowl (if you can, sift the flour into the bowl, as it will make the end result lighter). Mix these dry ingredients together.

Gently melt the butter in a cup in the microwave, or in a small pan. Add the melted butter, eggs and vanilla to the dry ingredients. 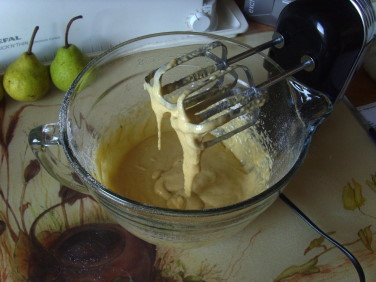 Beat the ingredients together with an electric whisk or a wooden spoon, keep mixing until a smooth, uniform soft batter is produced. 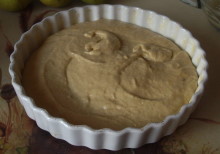 Thoroughly grease the inside of an 8 inch (20cm) flan dish with butter, pour in the batter and spread out into an even layer.

Leave the dish in a warm place for about an hour, or until the mixture proves, rising to at least twice the original size. 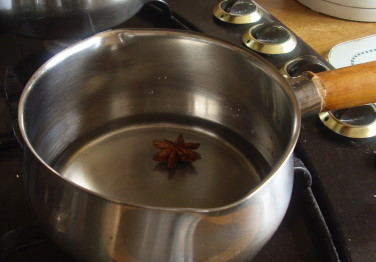 Meanwhile, bring the water to the boil, add the star anise, then reduce the heat and gently simmer for a few minutes.

Add the sugar and powdered spice into the hot water, stir until the sugar has dissolved, then remove from the heat. (Leave the anise in, for now)

Don't add the alcohol to the syrup until later, when it has cooled 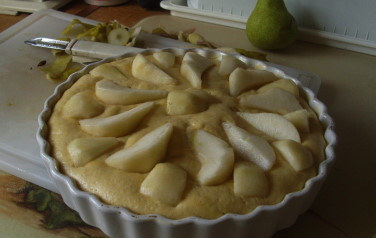 When the batter has risen, peel the pears and cut them lengthways into eighths, removing any pips or tough bits of core.

Arrange the pear pieces on top of the batter - just rest them gently on the top - they will sink in when it is cooking.

Bake in the oven for 15 minutes, or until cooked through in the middle (see below for how to test) 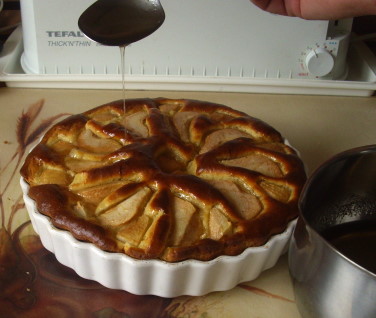 When the tart is cooked, allow it to cool for a minute or two, then add the rum or brandy to the syrup and stir it in and pour the syrup carefully over the tart.

You might need to add it a little at a time, waiting for it to soak in before adding more, Use all of the syrup. 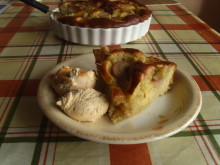 Serve while still warm, with ice cream or creme fraiche.

If left to cool completely, the tart can be re-warmed in a microwave for a minute or two, or covered with foil and warmed in a low oven for five minutes. 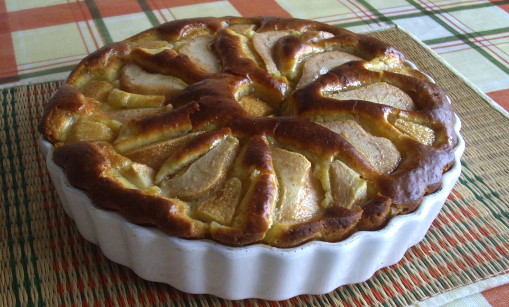 The sweet, delicate aroma of anise combines and perfectly enhances the pears in this recipe - the end result doesn't really taste conspicuously of aniseed, but instead, the pear flavour becomes quite intense.

Adding the sugar in the form of syrup, after cooking, guarantees that the end result will be moist and delicious.

When you take the tart out of the oven, it's important to test that it's fully cooked - to do this, poke a clean toothpick or cocktail stick into the centre and pull it out - if it comes out clean, the tart is cooked. 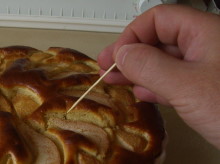 If it comes out with sticky, doughy mixture adhering, return the tart to the oven for a further 5 minutes or more (reducing the oven temperature if the top of the tart is already deep brown).

This recipe might seem as though it contains a great deal of sugar, when in fact, it's about the same as any ordinary cake - the difference here is that the mixture is baked more like a bread, with the sugar being added later as syrup - but it's not really any more sugar this way.

The same recipe can be used to make miniature brioche buns - cut the pear using a melon baller... 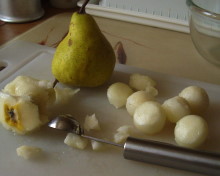 Put the batter in a greased nonstick bun tray - this one makes 4cm buns, which are just about right - place half a ball of pear in each one.

They bake, rising so as to almost completely envelop the pear pieces.

When they are cooled, remove them from the tray and pack loosely into clean jars and immerse completely in syrup (you'll need to at least double the amount of syrup you make, if you're doing them this way) 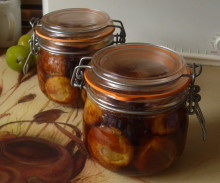 They'll keep in the fridge for a couple of weeks - if you can leave them alone that long...