What Are Oyster Mushrooms? 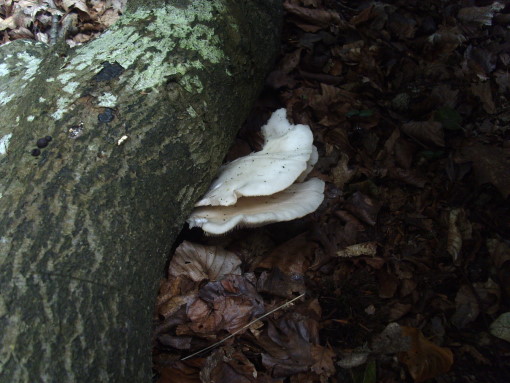 Pleurotus spp - flat, shelf-like fungi found growing on dead and dying deciduous wood - they are typically found in layered clusters. They have a texture varying from leathery when young to softly rubbery when larger.

Underneath, they have deep, soft radial gills. Several species may be found - all quite similar except for colour - which may be white, grey, pale brown or yellow. 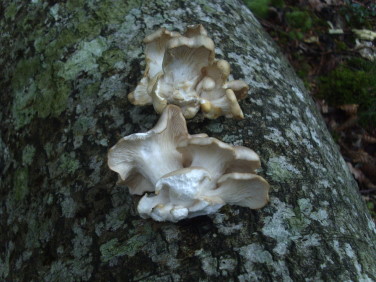 These are some of the younger specimens, shown here after detaching from the trunk.

The stalks are quite tough and fibrous or wooly in texture - harvesting them is best done with a sharp knife. 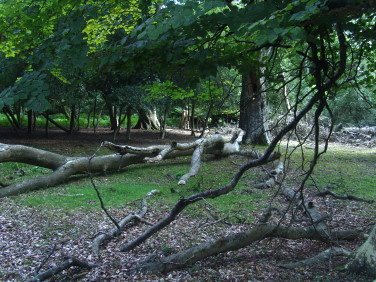 This is the favourite habitat of Oyster mushrooms - deciduous forest with lots of fallen trunks and branches that are not cleared away, but left to decay in situ.

Oyster Mushrooms In The Kitchen

There was evidence of lots of mushrooms about to emerge, but only a few specimens big enough to pick this time - I returned home with a small plateful... 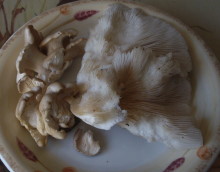 Sadly, the big ones proved to be riddled with little white maggots - too many to pick out.

So I discarded them and decided to use the rest in a dish of mixed vegetables, mushrooms and rice - including my dried fairy ring mushrooms - which I soaked in boiling water for half an hour - softening them and making a delicious stock for cooking the rice. 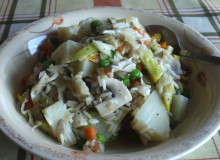 The result was really good, but the oyster mushrooms probably got a bit lost in the mix - if I'd found more, I'd have made a dish of them alone.

This just goes to show that even in the depths of winter, there are wild food treats out there to be had - you just have to look a bit harder to find them, or be lucky enough to just stumble across them like I did here.

Boxing Day, 2009 - We went out for a walk along the river Itchen near Wood Mill - I was pleasantly surprised to find some magnificent oyster mushrooms growing on a standing tree, despite the frosty weather. 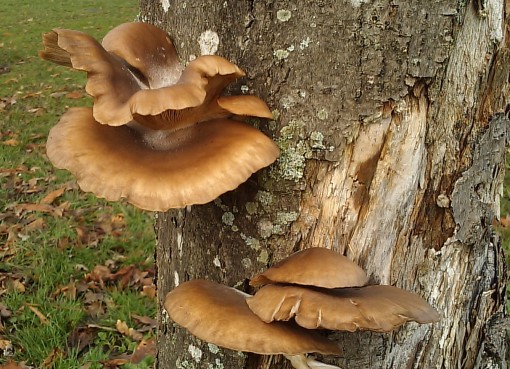 I'm not sure of the tree species - difficult to tell without the leaves - it might have been an oak species or perhaps whitebeam. About the fungi, however, there was no such uncertainty - oyster mushrooms are very distinctive in appearance, smell, growth habit, texture and other features. 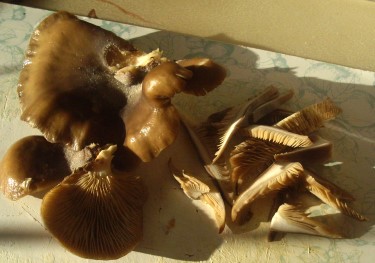 These were fairly mature specimens - much larger than this and they might have been inedibly leathery - as it was, they were just very nicely firm and meaty.

I decided they might be nice in a Chinese-style sauce, wrapped in a sort of pancake roll.

So I started by rinsing them under the tap to remove any bits of bark and debris (they stand rinsing very well). At this time of year, insect pests are also less likely to be a problem - these mushrooms were completely bug-free. 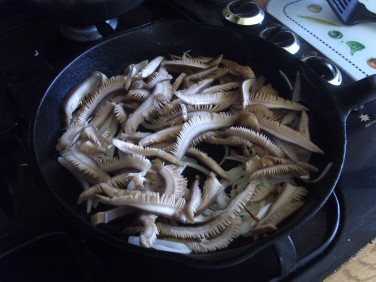 I sliced them into very thin slivers, discarding the tough wooly stalks.

I also sliced and fried a small onion, then added the sliced mushrooms and left them to gently cook while I made the dough for the rolls. 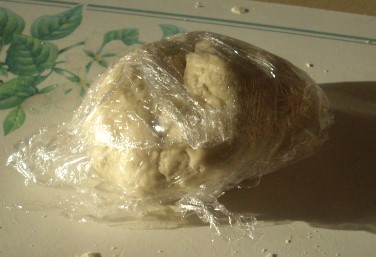 The dough is just 100g of flour to 75g of warm water, mixed and kneaded until uniform in texture.

I wrapped this in plastic film and let it rest while the mushrooms were cooking. 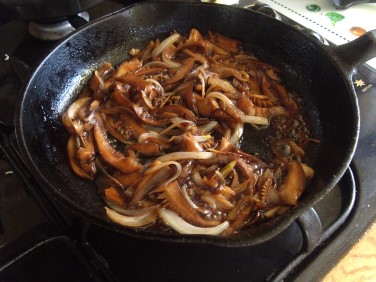 When the mushrooms were cooked, I added the ingredients for the sauce - a couple of tablespoons of plum jam (I had none, so I substituted seedless raspberry), a good pinch of five spice powder and a good dash of dark soy sauce.

I stirred it all together, then took the pan off the heat. 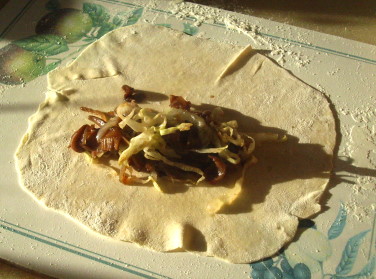 I cut the dough into three pieces and in turn, rolled each of them as thin as possible (plenty of flour on the board and on top of the dough helps to prevent them sticking.

I stirred a little shredded iceberg lettuce into the mushroom/onion mix in the pan, then added a generous spoonful to each of the dough circles. 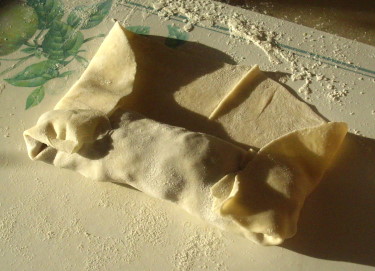 I rolled the edge over to enclose the filling, then folded in the ends, then continued rolling - this produces a completely enclosed parcel. 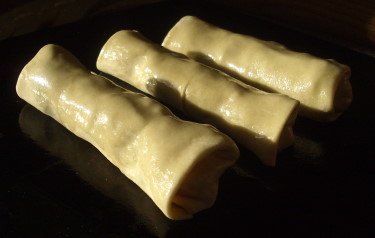 Ideally, the rolls would now be sealed down with a little water and deep fried in hot oil, but I don't have the facilities for that.

I brushed them with vegetable oil and baked them in the oven (180C) until they turned crisp and started to show colour. 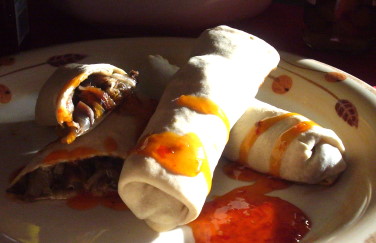 I served them with just a little sweet chilli sauce.

They were really pretty good - the mushrooms, especially these large ones, stayed quite meaty and substantial, making this a satisfying, completely vegetarian meal.