St Catherine's Hill is topped by a perfectly circular wood of tall, old beech trees fringed with other deciduous species, - mostly Elder and Hawthorn - the Mizmaze is found immediately adjacent to the wood, on the northwest side (see map below). 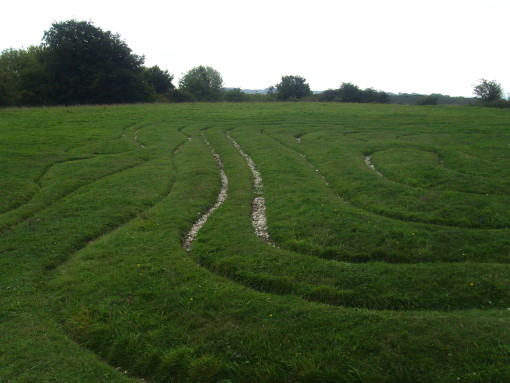 The maze is approximately 30 metres across, making it almost impossible to photograph in its entirety, at least from the ground - and on approaching from any direction, its nature isn't always immediately apparent. 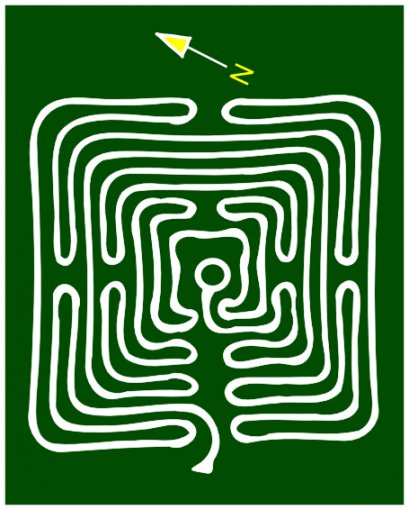 The maze consists of a narrow groove cut into the turf, exposing the underlying chalk in places, forming a single, unbranched path that repeatedly loops back on and around itself within a square boundary.

So it's not a maze in the popular sense that you have to discover the correct path to the centre, but rather, it's a labyrinth that just makes you take a very roundabout route to get there.

The path is narrow to the extent of being uncomfortable to walk - only about one shoe-width in most places, making it necessary to place one foot quite carefully and unnaturally right in front of the other as you walk.

There are a number of competing stories regarding the origin of the Mizmaze - notably:

The last of these seems the most plausible - the earliest written reference to the Mizmaze is a plan dated 1710, signed by J Nowell - a name which appears in the college records about the same date.

The actual details of the construction are obscure and mythical however - local legend holds that its construction was part of the boy's punishment for some misdemeanour (another part of his punishment was to be chained to a tree by the river bank). It is said that in his misery, he pined away and died, or that he drowned himself in the river.

The maze has been tended and recut several times in recorded history - this is not unusual for chalk hill figures of any kind.