August 2009 - I found a bullace tree on the edge of woodland near my home. 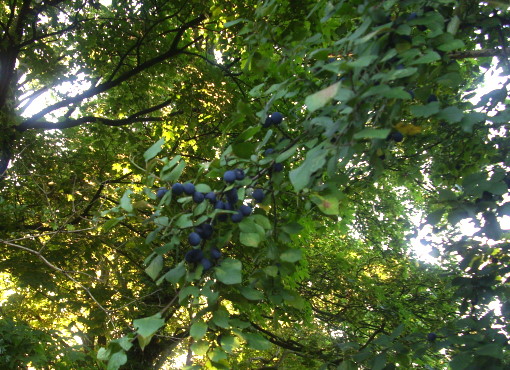 Prunus domestica var. insititia - a variety of plum that produces small, round fruits, usually with a dark blue-purple skin and greenish flesh.

There is much confusion and debate over the distinction, if any, between bullaces and damsons (another variety of plum) - as they share many characteristics - particularly the culinary properties of the small, astringent, aromatic fruit. 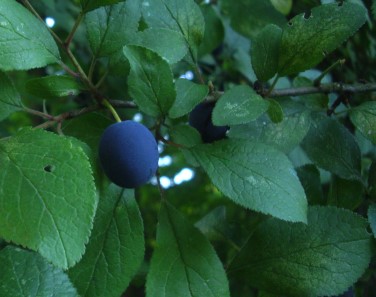 The tree resembles an ordinary plum tree in almost every respect. it sometimes bears a few thorns, though not as many as Blackthorn (sloe) - to which it is obviously related.

It's an attractive-looking fruit - two to three centimetres in diameter and fiercely, proudly purple. 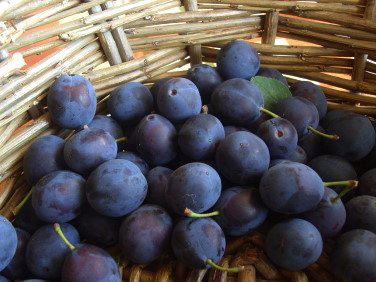 I only found the one tree and so I picked just a couple of handfuls of bullaces - but that's more than I need for what I have in mind...

They can be used to make a jam with excellent depth of flavour and colour, but I'm going to preserve them in brandy syrup - a bit like the method for sloe gin, except this will be an ingredient and dessert condiment, rather than a drink. 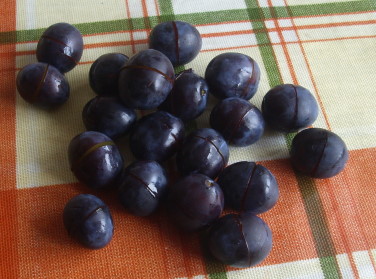 A lot of my books say they're not ripe until September - but these were almost ready to fall off the tree.

I began by washing the fruits, then slicing them right to the stone, around their equators.

The flesh clings quite tightly to the stone, but that doesn't matter as I will be using the whole thing. 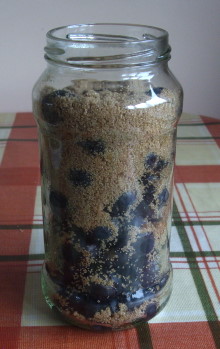 Next, I packed them into a jar - weighing as I went

My jar contains 250g of fresh bullaces - to which I added 100g of brown sugar.

Later on, when all of the sugar has dissolved and some of the juices have been drawn out, I will taste it and I may add more sugar if I think it needs some.

(And if I think it will dissolve) 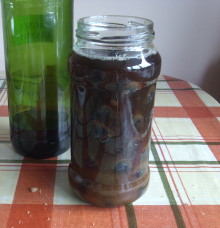 Then I topped it off with some good brandy.

I'm not sure how much - but it was just enough to immerse all of the fruit.

I put on the lid and gave it a good shake to start the sugar dissolving. Over the coming days and weeks, I'll give it an occasional shake to dissolve any remaining sugar and to agitate some of juices and flavours out of the fruit.

When it's ready (probably near the end of the year), I'll be using it to make grown-up versions of some favourite desserts such as sundaes and trifles. 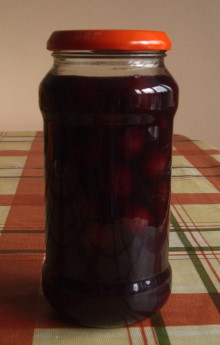 A week later and the sugar has all dissolved - some of the colour has come out of the skins into the liquor.

I tasted a little of the syrup - I think it's sweet enough, so all that remains is to invert the jar once a week to agitate the contents - for at least the next couple of months...

I didn't find enough fruit to make jam, so I'm making these into a syrup for my ingredient cupboard.

Later on, I'm hoping to use it for a variety of dessert recipes - ice cream sundaes, trifles, pancakes and more - I can hardly wait!

December 2009 - I used some of the bullace brandy to transform my chocolate and beetroot muffins into a rather special little dessert.

September 2014 - Out on a circular walk not far from my home, I again found bullaces in a hedgerow. I decided to try to make Bullace Jelly. 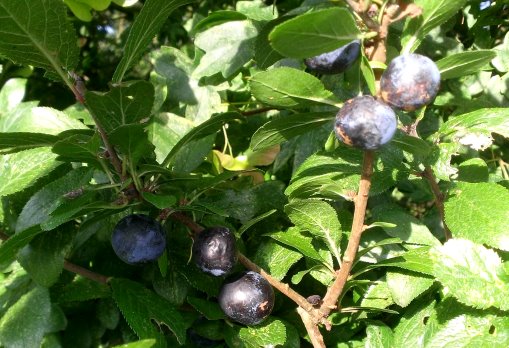 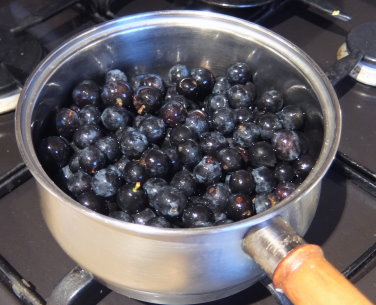 I picked about a kilo of bullaces, which I sorted, washed and placed in a saucepan over a gentle heat.

I added just a little water to help the start of the cooking process - just so the fruit wouldn't burn on the bottom of the pan. 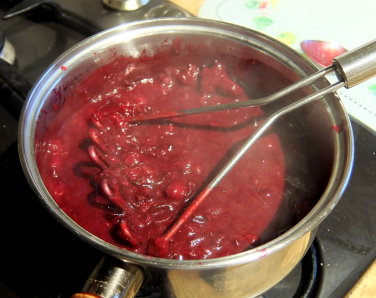 After about 10 minutes of cooking, the fruit was becoming soft enough to be crushed and mashed (I used a potato masher for this).

A further 10 minutes and it was nearly all separated from the stones. 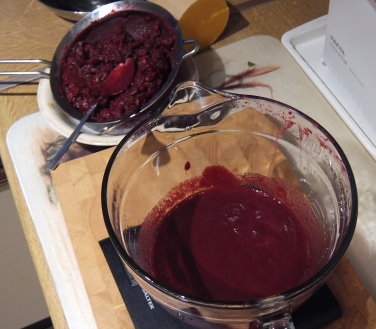 I poured the cooked pulp into a sieve and forced it through with a spoon - this was quite hard work, as the mixture was very thick and not juicy at all.

I ended up with 450g of thick, dark purple sieved pulp (I weighed the empty bowl first, then subtracted it from the final weight). 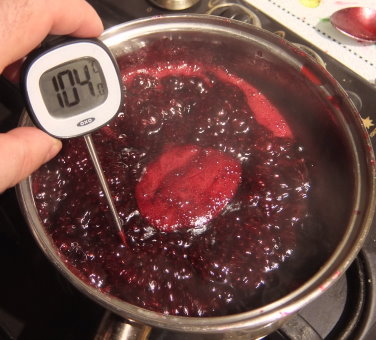 I put the pulp back in a clean pan and added 375g of white sugar. Interestingly, even before this was heated, it changed the consistency from a thick, opaque pulp, into a dark, semitransparent syrupy liquid.

I boiled this for just a few minutes. The low initial moisture content meant that it reached setting point very quickly indeed - I only just had enough time to sterilise jars to put it in. 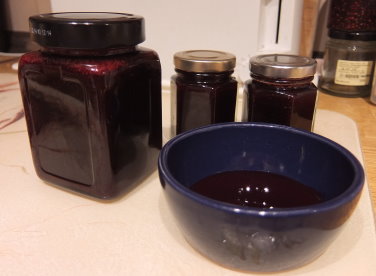 I ended up with one large and two small jars of very dark purple jelly, plus a little bit left over in a small bowl.

The taste at this point, although sweet, is also quite astringent. I'm not sure if this will mellow in storage - if it does, this will make a nice accompaniment to cheese or roast meats.

If it stays sour/bitter, it will probably only be useful as a roasting glaze, or as a minor ingredient in sauces.

The bullaces I found this year are small - but still distinct from sloes in size (see below for comparison - sloes on the right, bullaces on the left).

There are other distinguishing characteristics - the tree/bush on which they grew is more open and willowy, less thorny, and has larger leaves than blackthorn.

I tasted one of the bullaces raw though, and it was face-puckeringly sour/bitter - just like a sloe.