We took a day trip to Lulworth cove - the sea is beautifully clean and clear here, making it a good place to forage for shellfish. Let's try eating limpets...

Patella spp - gastropod molluscs (like snails) with very strong conical shells, living on rocks in the tidal zone - although most commonly seen immovably clamped to the rock, they are quite mobile when submerged at high tide and will roam about, grazing on algae - usually returning back to the same spot to rest (where the fringe of their shell exactly fits the rock surface - partly because of the shape of the shell and partly because the rock becomes abraded to fit). 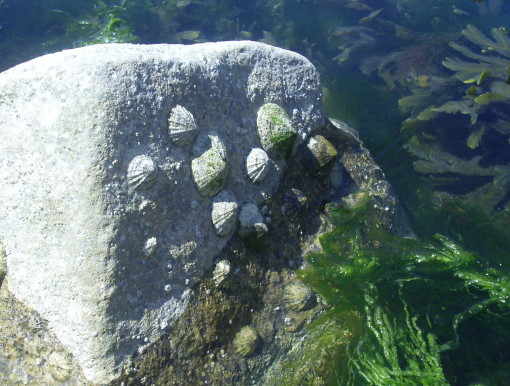 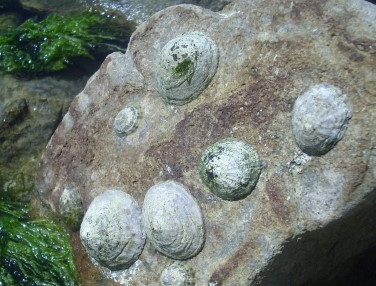 I found some really monster limpets at the rocks at the edge of the cove - some of them were more than 5cm in diameter.

They attach themselves to their rock by means of their circular sucker-like muscular foot - and when disturbed, they clamp down even tighter, making them practically invulnerable to predators and very difficult for the human forager to gather.

I removed a couple by sliding a very stout knife under the edge of the shell, flat against the rock, to break the seal of the sucker - another technique that might work is to catch them unawares and give them a hefty sideways shove with the end of a stout wooden pole. 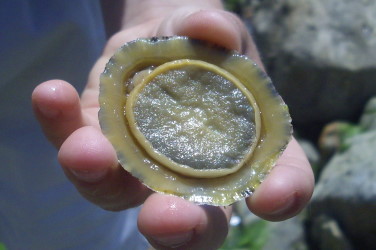 Once removed from the rock, they look like this underneath - the head of the animal is just visible at the ten o'clock position in this picture.

NB: the hand in this photo isn't mine, or else we really would be looking at a phenomenally big limpet. It's held here by my son.

The shell is about 5 or 6cm across the head-tail axis - so the sucker foot is about 4cm in diameter.. 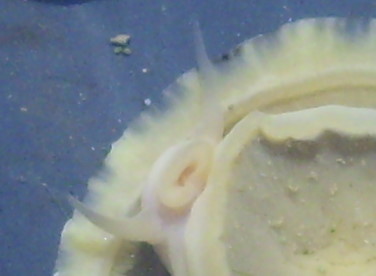 I had to transport my limpets back to our camp upside down in the bucket of water, as I didn't want trouble taking them out.

During this short walk, their heads emerged a little and it was easier to see how they're related to snails.

These are probably the Common Limpet - Patella vulgata. 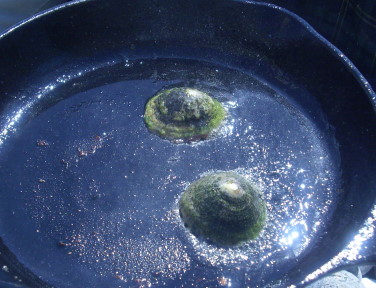 There really isn't any easy way to dispatch the limpets prior to cooking them - the most humane way is really just to get the cooking pot or pan hot and ready and drop them straight in.

In this case, I had a skillet with some leftover fat from frying sausages - so I got it smoking hot, then added the limpets, covering quickly with a lid to contain the heat and the spitting mixture of water and fat.. 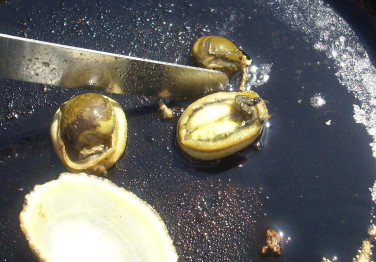 Five minutes later, they're cooked - and they fall out of their shells.

The dark greenish hemisphere on the top side of the limpet (which was concealed in the top of the shell before) is the digestive system and other organs - it's very easy to separate from the foot, and should be discarded.

They're really very tasty - sweet and shellfishy - similar to squid, with a distinct - but entirely pleasant - seaweedy tang, which I think must be attributable to their diet).

However, they're remarkably tough and chewy - like eating a disc of rubber. This doesn't particularly bother me, but it would probably be a bit tiring to eat a whole plateful of them.

I suspect they could be cooked as above to remove them from their shells, then further cooked by slow stewing with wine, onions and herbs, in the manner of octopus - and this might result in a very tender and tasty seafood dish. So I'll be trying that sometime...

As far as I'm aware, there isn't any off-season for limpets, but it's prpbably still best to gather them in the summer, when they're metabolically most active.

They're found pretty much anywhere where there are rocks (or other objects, including manmade structures) big enough for them to attach to - but that doesn't make it a good idea to get them just anywhere.

I tried the long cooking experiment - take a look here for details...