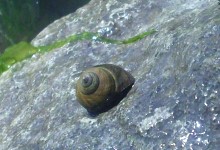 Turn over any rock at the seaside and you're quite likely to find these little critters - they're Common Periwinkles - otherwise known simply as winkles. They are very commonly eaten - so let's see what they're like. 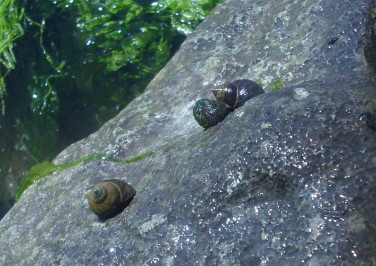 Littorina littorea - gastropod molluscs (like snails) with hard spiral shells, living on and under rocks in the tidal zone.

They're quite mobile when submerged - their heads and tails visibly emerge from the shell as they crawl about on the rocks.

I found these on the rocks at Lulworth Cove in June 2010. 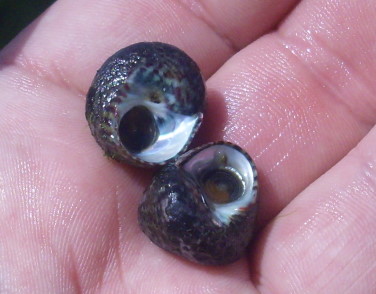 They can be picked off the rocks easily by hand - and it doesn't take long to gather a large number of them. Be careful though, because the rocks where you'll find the best ones will probably be very slippery with algae (that's what they eat).

When picked up, they retreat deep into their shells and shut themselves in by closing a toughened circular plate called an operculum. 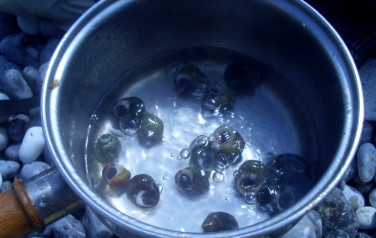 I cooked mine by dropping them straight into a pan of vigorously boiling water (seawater, in fact).

There is much debate about the correct duration for cooking - some people cook them as little as four minutes after they return to the boil, others simmer them for half an hour (this probably makes them more tender, but is likely to shrink the meat a bit). 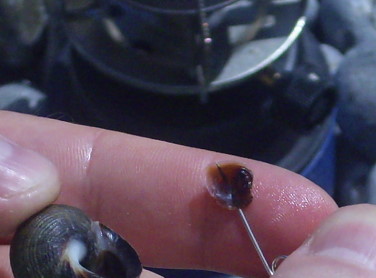 I cooked mine for about 8 or 9 minutes, then drained them onto the lid of the pan.

They're traditionally eaten using a pin.

First, it is necessary to remove and discard the operculum - it should just come away easily.

After that, the meat can be hooked out by sticking it with the pin and twirling it out of the spiral shell. 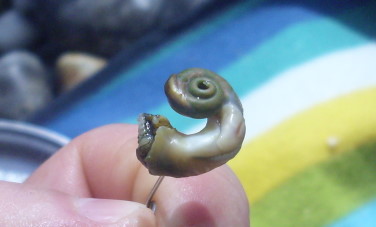 Here's what they look like when removed from the shell - clearly not going to win any beauty contests - and the appearance is off-putting for some people.

I find it helpful not to look too closely and just dig in and eat.

This is a tasty little shellfish - a bit on the chewy side when cooked for less than 10 minutes as I did, and they're quite small and fiddly to prepare, for the amount of food they represent.

However, they'd be good as an appetiser for a group (assuming everyone is willing) - maybe served with a bowl of melted garlic butter and some pepper and perhaps vinegar - the flavour is robust enough to stand up to these seasonings without completely getting lost.