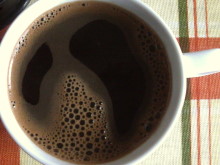 '... can be used to make a substitute for coffee' - if (like me) you're a reader of books about foraging, wild food and bushcraft, you'll have seen this phrase applied to an assortment of different things.

So it's possible to make fake coffee - OK, but how good is it? - let's find out. 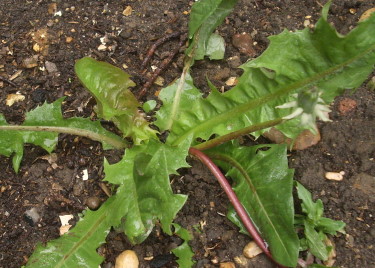 Dandelion is a perennial weed that forms a thick, fleshy taproot resembling a parsnip - this root can be roasted and ground to make a coffee substitute.

This is one coffee substitute that I've actually made before, and I liked it - it's a lot of work, but I'm repeating it so I can document it here. 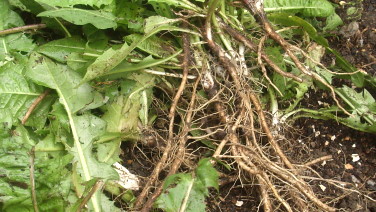 My vegetable plot contained all the raw materials I needed - about a dozen young-ish dandelion plants.

I'd have liked older plants with thicker roots - these were approximately pencil thickness, but there's enough here for a small scale experimental batch of dandelion coffee. 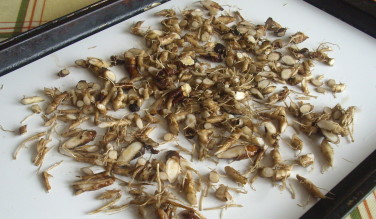 I washed the roots clean - once under the outside tap, then I then trimmed off the foliage and took them indoors where I rinsed them again.

I chopped them quite small and spread them out on a tray to dry. 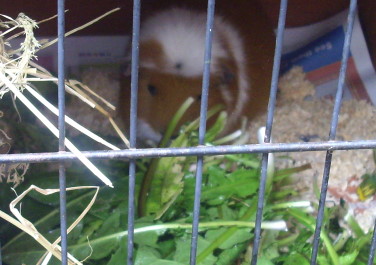 Waste not, want not - the leaves were greatly appreciated by Tomás - our ancient guinea pig. 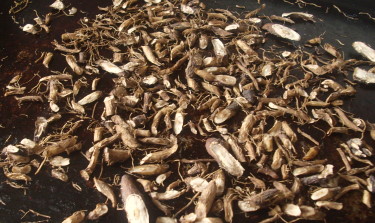 The chopped pieces only need to dry for an hour or two - just to stop them sticking on the tray when they're heated.

I baked the roots on a metal tray in the oven at 120 C for about 15 minutes until they were completely brittle, then took them out and crushed them in a dish using the back of a dessert spoon.

I spread the crushed fragments back on the metal tray and put them back in the oven, turning up the heat to 170 C and baking them for a further 10 minutes, until they turned dark brown.

If you're trying this for yourself, take care with the timing - you might need to keep watch to prevent completely burning the pieces during the second roast.

I used about one and a half tablespoons of the dandelion coffee grounds in my cafetière - leaving it to brew for a minute before pouring.

Here's what it looked like. Scroll down for details of the tasting... 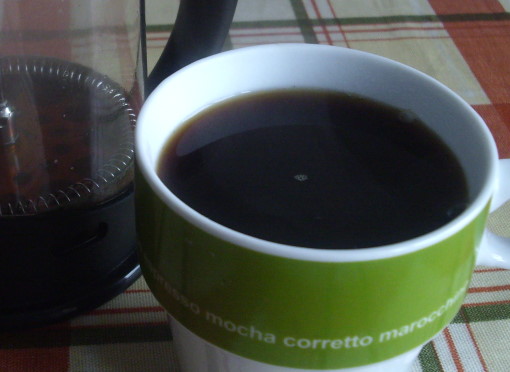 It pretty much looks the part - although it lacks the tawny foam you get with real coffee.

The flavour is certainly deep and complex - reminiscent of coffee, but with a nutty, earthy body and licorice-caramel overtones.

The aroma isn't particularly intense or enticing and there's a slightly syrupy, slippery mouthfeel to it - nothing unpleasant, just different.

It's more like coffee than probably half of the granulated instant coffee I've ever tasted, That alone may not represent a resounding recommendation to some people, but truthfully, this is a pleasant and drinkable beverage.

If you're quite particular about your coffee, this substitute may fall short of your expectations. But if you're willing to try something just a bit different, you might just like it. 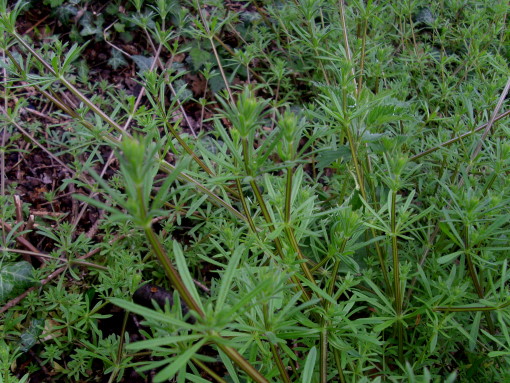 Some other common names for this plant are Stickyweed, Sticky Willie and Catchweed - these (as well as 'Cleavers') refer to the fact that all parts of the plant are covered with tiny bristly hooks making it cling to almost anything - especially soft fabrics.

The plant is in the same botanical family as true coffee (Rubiaceae) so the folk recipes for using the roasted and ground seeds as a coffee substitute sound quite promising. 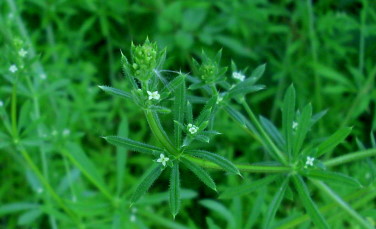 The plant has leaves arranged in ray-like radial whorls. The stems are ridged and contain tough fibres.

The greenish white four- petalled flowers are so tiny, they're easy to overlook entirely. They're followed by pairs of roundish fruits, easch containing a single seed about 2 to 3 millimetres across.

The fruits are covered in the same bristly hooks as the rest of the plant - the seeds may be dispersed by becoming attached to the fur of animals (or the clothes of humans). 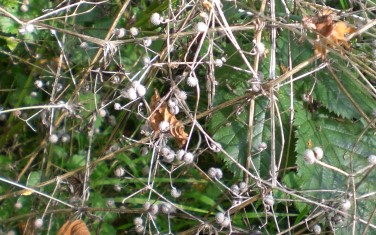 By the end of summer, the plant dies back to a mass of dull, straw-like stems and the fruits are easily found.

Collecting them, however, is pretty laborious. The best way I could find was to pick a place where the plant has grown in great profusion, then pull out whole clumps of it, then take somewhere nearby to sit down and pick off the seeds. 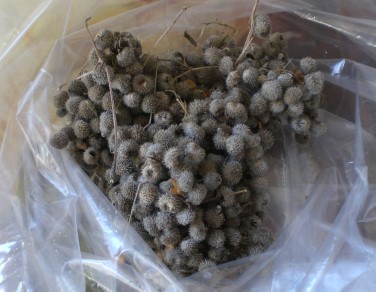 Even so, it still took me half an hour to collect enough fruits for this experiment - about a handful.

So I can't see this substitute presenting a commercial threat to real coffee anytime soon, no matter what it tastes like. 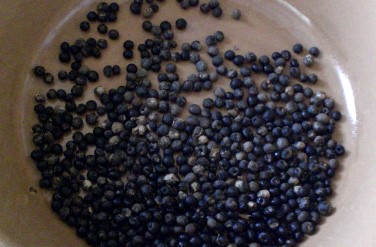 Preparing the seeds was also hard, time-consuming work - rinsing them in cold water and rubbing them vigorously between my hands, the bristly casings eventually came off, revealing the little, dark brown dimpled seeds.

Several repeats of the process of rinsing and rubbing were necessary to rid the seeds of nearly all traces of debris. 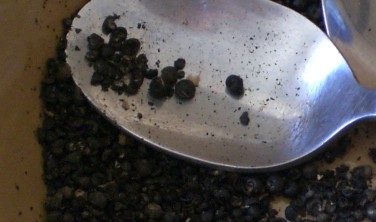 I then roasted the seeds in a hot (200C) oven for twenty minutes and - lacking a proper coffee grinder - crushed them between two spoons.

At this stage, they do smell a bit like ground coffee, but only a bit. 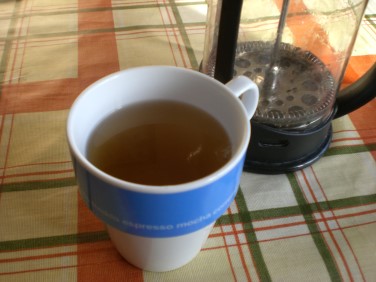 A handful of seeds in their casings reduced to about a tablespoon of ground seeds - just enough for one cup of fake coffee.

So I put the grounds in my cafetière, added boiling water and left them to stand for ten minutes (as prescribed by some of my wild food reference books.

The result is a very pale-looking beverage, but what is it like to drink?

To begin with, it doesn't really look like coffee - and appearance really does matter, because with something as familiar as coffee, perception is everything - and if any detail is a bit off, it's going to affect the whole experience.

The flavour is delicate - certainly coffee-like, but rather indistinct. Slight licorice tones.

The aroma is faint, but reasonably convincingly coffee-like

For the amount of effort required to prepare it, the end result was pretty disappointing. It's a fair substitute for weak coffee, but no better than weak instant coffee in its closeness to the real thing.

1/5 - Flavour is weak and indistinct.

2/5 - Similar to coffee flavour, but a very weak performance. 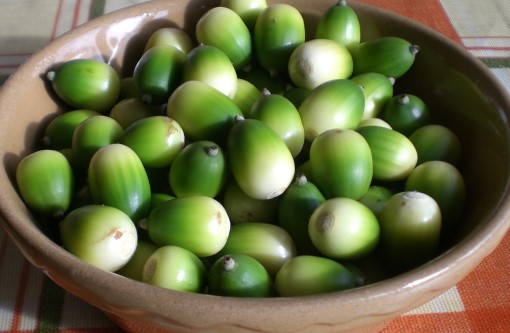 Acorns are probably the best-known candidate for wild food-based coffee substitutes. I'm told they're also one of the poorest, but we'll put that to the test here.

I picked these acorns in October 2010 at Queen Victoria Country Park, near Southampton. They're from the same Holm Oaks I've used in previous articles exploring the general edibility of acorns - here 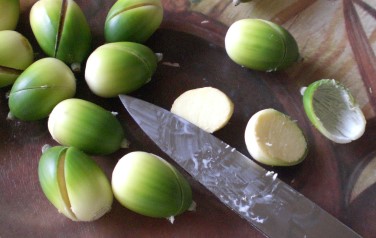 The acorns were still a little under-ripe, but this made them really easy to peel just by slicing them in half and popping out the kernel pieces.

I put the peeled acorns in the food processor and ground them into small pieces. They discoloured to pinkish-brown - not a problem though, as they are to be roasted. 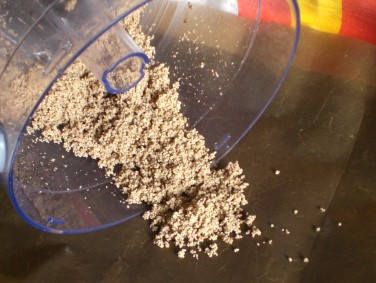 I tipped the acorn meal out on a nonstick sheet on a metal tray and spread it into a thin layer.

I put the tray in the oven (preheated to 180C) for twenty minutes. 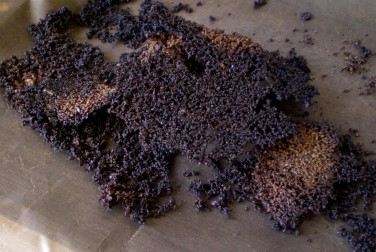 After initial roasting, the meal had turned dark brown, but had also stuck together into a single flat, crispy layer.

I crushed it back into meal and roasted for another five minutes to darken it a little more. 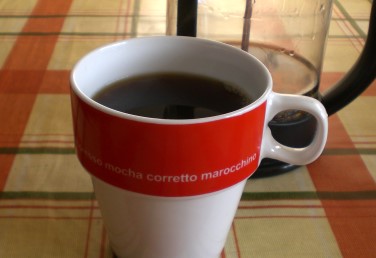 I made the coffee substitute in my cafetiére as usual - two big spoons of the grounds and about half a pint of boiling water.

It made a really striking crackling sound as the water was absorbed into the grounds. I left it to steep for a couple of minutes, then poured a cup.

It looks the part - dark - perhaps a little on the reddish side of dark brown.

The flavour is quite nutty with caramel tones - reminiscent of coffee with hazelnut syrup. There's a distinct and quite strong tannic bitterness that lingers on the palate a bit too long to be pleasant.

The aroma is fairly coffee-like, but a little bit burnt-toasty.

The key advantage here is that acorns are big and abundant - so the raw materials aren't hard to prepare (unlike of some other coffee substitutes, which are very laborious in the making). However, the flavour still isn't really in the same league as real coffee.

2/5 - Fair, but spoiled a bit by the penetrating bitterness

3/5 - Not brilliant, but not bad, probably better still with milk or cream.