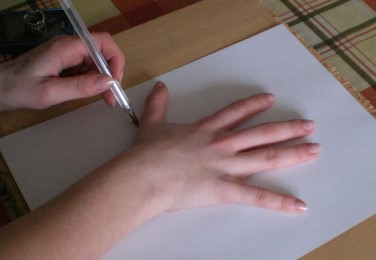 To begin, I needed a real human hand as a model.

I drew around it onto a piece of paper, also marking the positions of all the joints.

That's all. Thank you, hand. 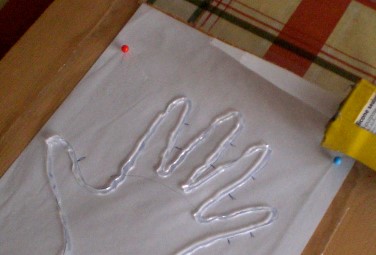 I covered the paper with a flat sheet of clear polythene, then pinned it down to a wooden board.

Using ordinary silicone bathroom sealant, I traced a line around the outline of the hand (on top of the polythene.

Once it's cured, the silicone will peel away from the plastic layer cleanly. 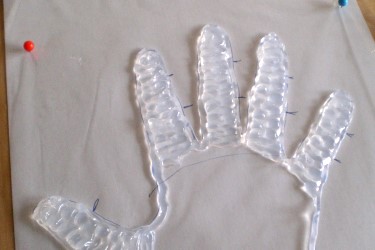 I filled in the outline with more silicone, squeezed in as a pattern of zigzags, so as to create a fairly thin layer across the whole area of the hand. 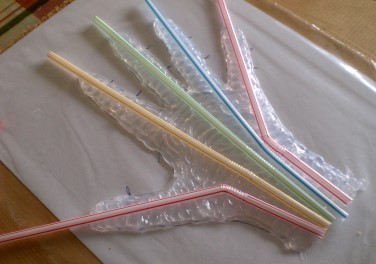 Once the whole hand was covered, I pressed on five plastic drinking straws.

These are in more or less the same position as the bones in a real human hand - and they will partly serve the same purpose - to provide rigidity.

They will also form channels for the control cords (analogous to tendons in the real hand). 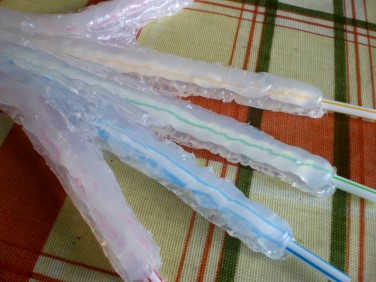 I left the first layer of silicone to dry overnight - it's best not to create anything too thick with this stuff, as it would then take a really long time to fully cure.

The next day, I cut the tip off the spout of the slicone applicator, allowing it to produce a thicker bead - which I then applied along the back of each finger. This thicker section will give the fingers their spring and substance. 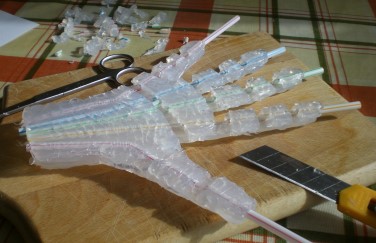 Once everything was fully cured, I trimmed everything up so it looked a bit nicer, then cut channels across the fingers, and through the straws, on the palm side of the hand at each joint position. 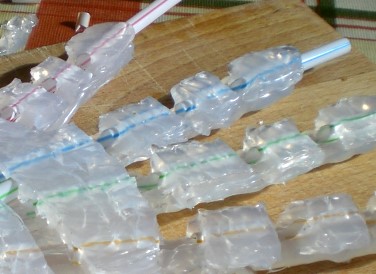 Taking a closer look at those joints - the palm layer is removed, along with a section of the straw, but leaving the thick bead below intact. 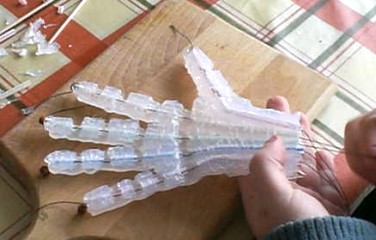 Finally, I threaded a piece of strong, thin cord down each of the straws, tied to a small bead at the fingertip, to prevent it pulling through.

And that's it - the hand is ready for testing...

Video footage of the first test of this model hand is at the top of the page.

I've seen tutorials on making a similar hand to this one elsewhere on the web - such as this one - but I wanted to see if it could be refined a bit - and I wanted something that didn't include any paper in the construction.

If I was to make another one of these, I think I might try to do it so that it requires less cutting for the joints - this could be achieved by creating the finger pads (between the joints) as separate pieces on the first layer, then laying the straws across them.

This model hand is based on a real human hand - but it's not really brilliant at picking up or gripping. If I was building this as a prosthetic, or as part of a robot, I might design something more functional, even if it ended up less hand-like.

Gotta HAND it to ya! this was great! I kinda feel the urge to make one too! Keep up the great work, love your site. From Houston Texas!

THUMBS up! i couldnt ever have done this in my life. BTW, how long did it take you;

Does the sealant have to be silicone?

As long as it's something that cures to a very soft flexible material, other sealant compounds should work, however, I think Silicone is probably the best choice.

Great make, reccomending your site on my blog

Do you know how many pounds this hand can lift? I'd like to use it for my seventh grade project and the more weight we can lift the higher our grade. So before my group and I decide on ideas we want to know how much this can lift. Any estimations?

It's not very strong at all compared to a real human handThe reasons for this are:The closing force is limited by the strength of the cords and the strength of the beaded end - if you pull hard, the bead starts to get pulled into the end of the fingert

In all, this is a device that can be made to look spookily realistic, but isn't very functional as a gripping deviceIf you need something that works better, focus on getting joints that hinge without twisting, and cords that transmit the force to the e

Most food bags are made from polythene - just use a large sandwich bag.

is there away that this hand can pick up a small empty can;

Yes - it would probably pick up something large-ish and light - an empty can maybe, but I tried it with heavier things (an apple) and it just didn't have the rigidity or constraint of joints - the fingers twisted and the grasp was broken.

Awesome, I want to make this

Possibly could you try with something that would work better than straws?