This was my first ever attempt at making croissants - I'd always thought it would be difficult, but it turned out to be quite easy - and the results were fantastic. 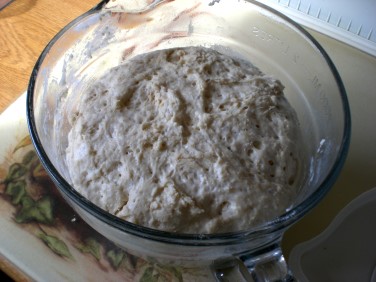 Make a batch of basic white bread dough and leave it to prove.

Meanwhile, take the butter out of the fridge to allow it to come to room temperature - so it will become soft enough to work with.

Cut the butter into slices and arrange them on a sheet of plastic (I used a sandwich bag that I cut open).

Place another sheet of plastic over the top and roll out the butter to a layer about 3mm thick. Aim to end up with a fairly neat rectangle (if necessary, cut pieces off the edges and rearrange them as you go). 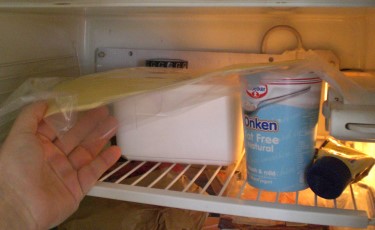 Leaving the plastic in place, put the butter in the fridge to chill.

This will make it easier to handle when it is folded into the dough. 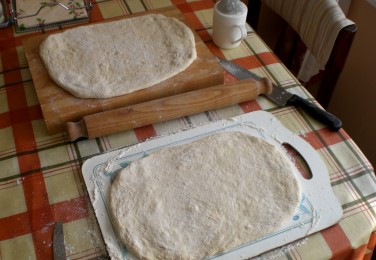 Once the bread dough has risen to double the initial size, knead it and divide in half.

Roll out each half into a rectangle about the same size as the sheet of butter prepared earlier - this will be about 30 by 20cm. 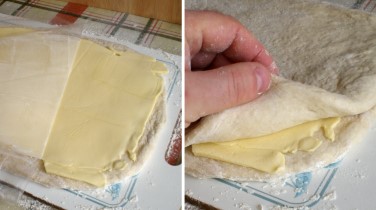 Retrieve the butter from the fridge, peel off the plastic on one side and lay the butter on one of pieces of rolled dough.

Carefully peel off the other layer of plastic, then lay the second sheet of dough on top. 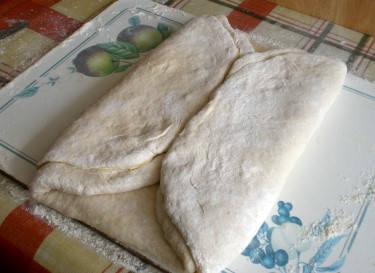 Press the layers together (but gently), then fold both ends in to the middle.

Turn the folded sheet over and roll out until it is the same size as before, then fold in half and roll again.

Keep rolling out and folding until you start to see patches of butter showing through the layers of dough. After about five rounds of folding and rolling, you will notice that the butter is starting to break through in patches - don't fold any more after this. 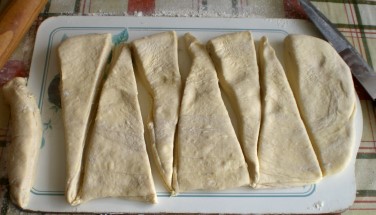 Cut the dough into wedges - I got nearly 8 out of mine, but I'd recommend rolling out longer/narrower and aiming for 10, as my croissants ended up so big, they were a little doughy in the middle. 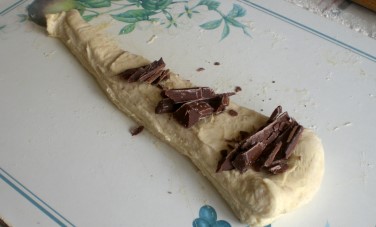 If you're making pains au chocolat, lay a few slivers of chocolate at intervals along the piece of dough before rolling it up.

If you're making croissants, roll the wedge of dough a bit thinner (and wider at the big end).

In both cases, roll up the piece of dough, starting at the wide end. 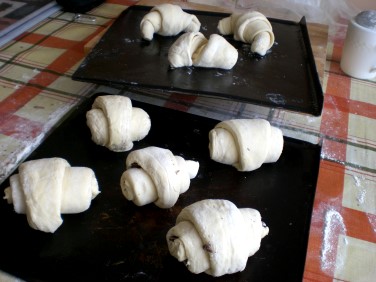 Arrange them all on a couple of baking trays - leaving space for them to expand (they will double in size before and during baking).

Preheat the oven to 190C. Some of the butter will run out of the dough during cooking - so if your baking trays don't have raised edges, place a large roasting tray in the oven to catch the drips.

Leave the trays in a warm place while the oven comes up to temperature. 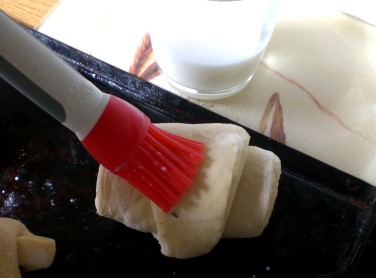 When the oven is hot, brush the tops of the croissants with milk, then place them in the oven.

Set a timer for 12 minutes - check them at the end of this time and turn the trays around if they're baking unevenly - bake for a further 6 minutes, or until the croissants are deep, golden brown all over.

Remove to a wire rack to cool. 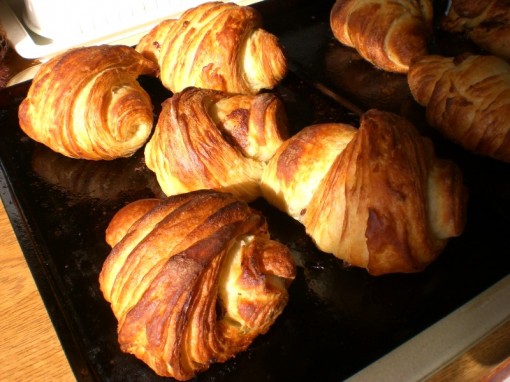