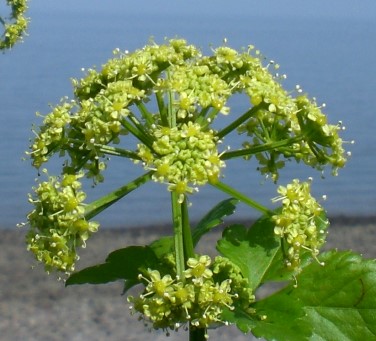 The five little greenish petals on each of the individual flowers are quite insignificant and easily overlooked, but overall, the flower structures are probably the clearest distinctive trait.

Most other plants in this family have flattish, whitish flower heads - making Alexanders quite easy to spot, even from such a distance that the individual plants are hard to distinguish. 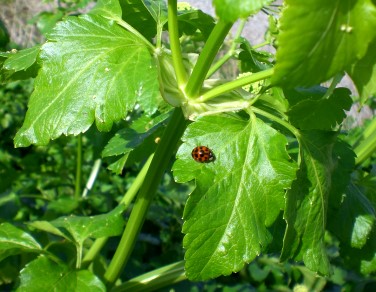 The leaves are toothed or ragged and arranged in pinnate pairs. they're quite soft and glossy at the stage when the flowers are still fresh.

The stems are smooth, but quite flexible despite their apparent stiffness. Young stems can be snapped away from the plant. Older ones are quite stringy and would need to be cut. 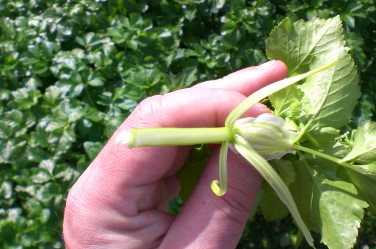 The most commonly eaten part of this plant is the stems - and the best bit is the tender core, after peeling away the fibrous outer skin

It's usually steamed or lightly fried in butter and served with salt and pepper, but I nibbled a little bit raw - and it was quite surprising (see below for the verdict). 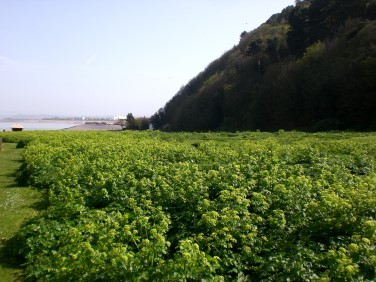 This plant was once popularly grown in vegetable gardens, but is now largely forgotten. There's not much need to cultivate it, as it's quite widely available - here at Minehead, there was a massive swathe of it up beyond the little harbour to the west of the town, and I saw loads of it all along the coast and on roadsides on the way in. 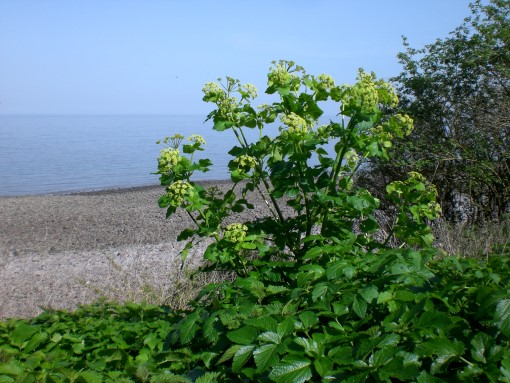 I guess there could be a need for a cautionary note here - the umbellifer family to which this plant belongs also contains some quite poisonous members, including Hemlock, Giant Hogweed and others. Just make sure you know what you're picking - consult several different sources to aid identification and if in any doubt, wait.

Proceed, as always, at your own risk...

I'll revisit this page with a verdict on the cooked form of this wild vegetable, but in its raw form, it's quite amazing - almost like the flavour of every other umbelliferous vegetable crammed into a single plant - it's carroty, parsley-ish, but also has the nutty freshness of celery (and that same weird mildly mouth-numbing effect), and it's got an aniseedy fennel aroma, as well as something quite fruity and unique that it all its own.

This clearly isn't going to be a wild food for people who like mild or understated vegetables - Alexanders is a vegetable with real impact - I can't wait to try cooking with it.

As A Cooked Vegetable

I tried the peeled stems two different ways - steamed and served semi-crisp, and simmered in seasoned butter - both were excellent, although the striking flavour of this vegetable does require careful matching - excellent with seafood, but probably useful as a base ingredient in some recipes that would normally call for finely diced celery (maybe rice dishes such as paella).