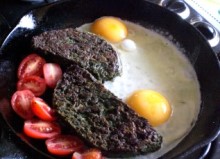 This is a wild food recipe for something called Nettle Pudding. You could think of it as a vegetarian version of Black Pudding or sausages - it's ideal for slicing and frying to form the hearty centre of a cooked breakfast, or it can be sliced thinly and used in sandwiches.

You'll need a food processor to make this. 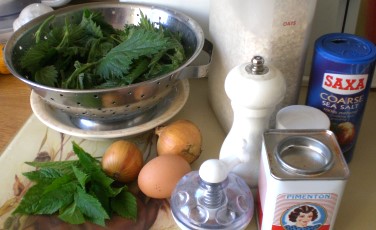 You'll notice that the ingredients here - particularly the spices - are the same as you might use for making sausages, meatloaf or even haggis - and that's no coincidence - Nettle Pudding fills the same kind of space on the plate as those things, except without the meat

I'm not a vegetarian myself - and in fact, I love a bit of Black Pudding, however, I think Nettle Pudding stands up pretty well in this role. 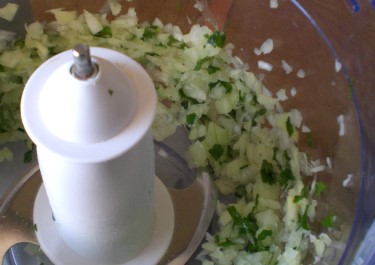 Peel the onion and chop it in the food processor with the parsley (I didn't have any parsley to hand, so I substituted Ground Elder, which I found growing alongside my nettles. 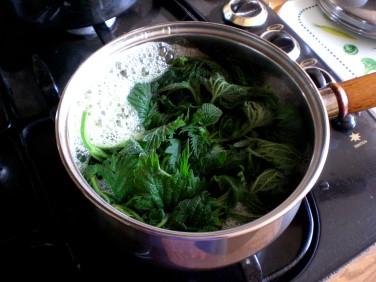 Wash the nettles thoroughly under running water, then put them in a pan of already-boiling water..

Cook for just a few minutes - long enough to wilt and soften the nettles (and eliminate their stings), but leaving them still fresh green in colour.

Drain them in a colander and allow to cool enough to handle. Press the nettles in the colander with the back of a spoon to expel some of the water, but don't wring them out completely. 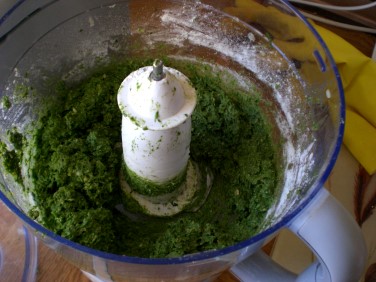 Put the nettles into the food processor with all the other ingredients and blend until a coarse doughy paste is formed.

The texture should be thick and sticky - almost thick enough to roll up and knead - test this by taking a generous spoonful and holding it upside down - if it stretches and falls off, add another handful of oats and blend again for a moment. 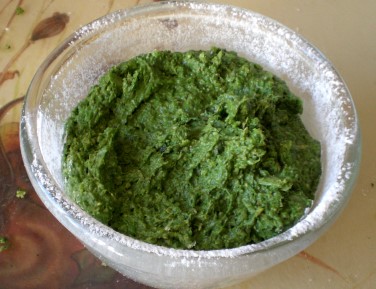 Put the mixture into a heatproof pudding basin - pick one that's big enough to allow the pudding to expand at the top.

Greasing the basin with butter or vegetable oil, then dusting with flour before adding the pudding mix should prevent the pudding from sticking in the bowl when it's cooked. 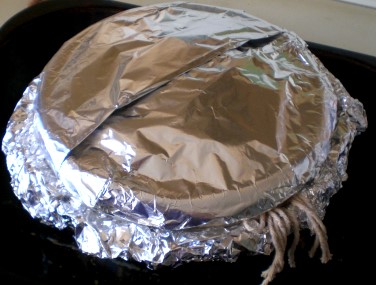 Cover the basin with a layer of greaseproof paper or parchment, then a layer of foil. Tie this tightly in place with cotton or hemp string. A pleat in the foil/paper allows it to expand if necessary.

Stand the basin in a metal tray of water and place in the oven (170C) for 45 minutes. 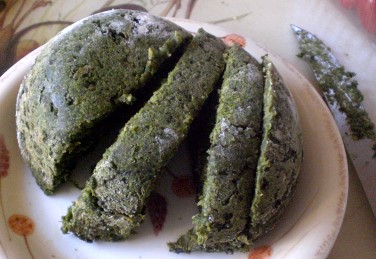 Allow to cool a little before handling. Remove the covering and turn the pudding out onto a plate.

Leave to cool further, then slice thickly - about half an inch - for frying (or leave to go completely cold and it will become firm enough to slice thinly to be used as sandwich filling). 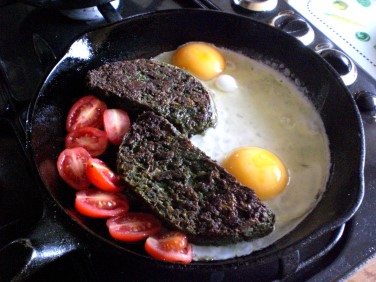 Fry the slices for 5 minutes each side, or until browned and crispy. 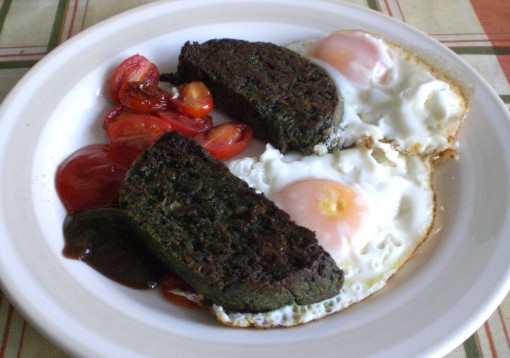 As I mentioned above, this dish is substantial and satisfying enough to form the centre of a meat-free fryup (and I say this as an omnivore with quite a penchant for sausages and bacon).

The best time to pick nettles is spring, although they can be found at other times - see here for more details.

I find it best just to pick the tops - maybe four or six leaves, shaking each one vigorously to remove any bugs before placing in the basket. Don't even think of trying to pick nettles without gloves - rubber household gloves are ideal.

Also, the best nettle tops tend to be those just beyond an arm's reach from the edge of the patch - so it's probably wise to have your legs fully covered too.

The term 'pudding' might be a point of confusion to some readers, as the word has a really broad definition in the British Isles - it can mean just about anything - ranging from a generic description of the dessert course of a meal, to a steamed pastry dish such as Steak and Kidney Pudding, to sausage-like items such as Black Pudding.

Nettles, In A Burger? 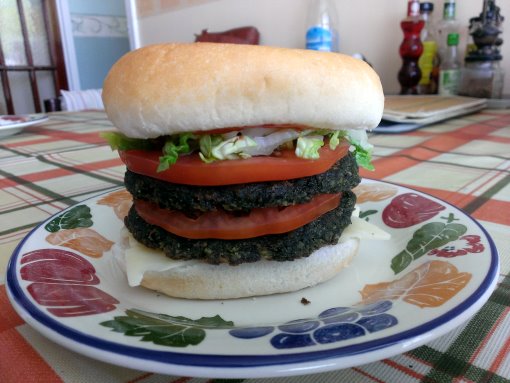 I can't guarantee you'd like this, but one thing I definitely can say - these didn't disappoint me at all.

There's something quite substantial and savoury about nettles - I hesitate to call it 'meaty', but it's deep, rich and complex in a way that comfortably provides a satisfying and punchy meal that is not conspicuously lacking a meat component.

If you add a slice of wholemeal bread into the recipe above (just blend it with the other ingredients), it lends a more open and soft texture to the finished product 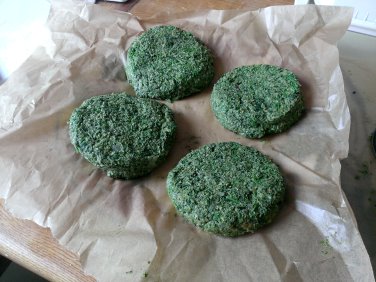 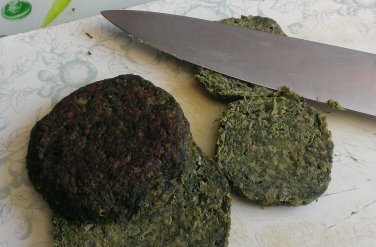 I made the mistake of making mine a little too thick and they still had a doughy texture in the middle, but I was able to remedy this by slicing them in half through the middle and refrying the cut surfaces

After this, they were fully cooked right through - tender and moist on the inside with a crispy, rich-tasting exterior. 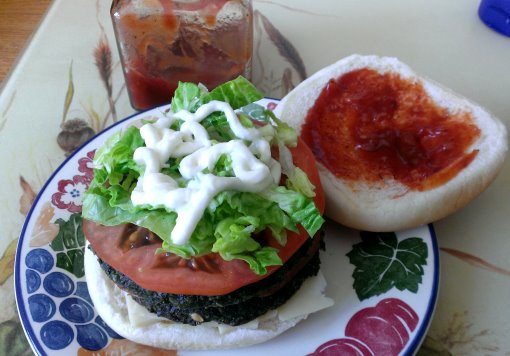 As these burgers are quite low in fat, you can load them with cheese, mayonnaise and other toppings without feeling too guilty. 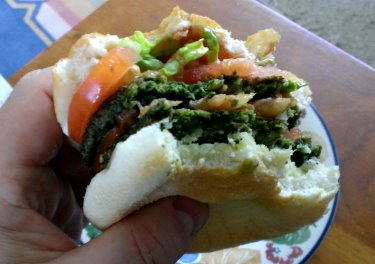 These truly are a delicious and substantial bite - I'm about as committed an omnivore as it's possible to be, but I found these every bit as enjoyable, filling and satisfying as a meat-based burger - different, of course, but very nice in their own way - and definitely superior to many commercial vegetarian burger offerings I've tried in the past.

If the green colour is offputting, you could just substitute a couple of teaspoons of dark soy sauce for the salt in this recipe - and they will come out more of a brown colour.

YUM! I would sub chickpea flour for the egg and make it vegan but otherwise this is a wonderful recipe :). Cheers for sharing