The project was, in my opinion, a success - here's what the end result looks like (scroll down for the recipe): 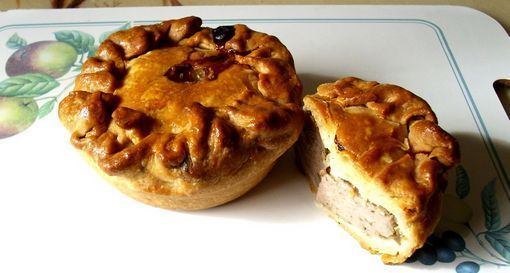 The pie is made with turkey meat - the dark meat cut from from a turkey drumstick - the crust is a proper hot water pastry, but made with duck fat in place of the traditional lard, and the jelly in the pie is made from stock extracted from the turkey bones and trimmings.

Makes three pies - each approximately 400g (about 3/4 lb) - So in total, suitable for six very generous adult portions of half a pie each - certainly enough for the core of a substantial picnic or lunch.

Using a small, very sharp knife, trim the meat from the turkey drumstick - this isn't easy, as it contains many small tough ligaments and membranes - better still, cajole your butcher to do this for you, but make sure he gives you the bones and trimmings too - as you'll need them for the jelly.

Put the meat and all the other filling ingedients in a food processor and run it until it forms a chunky paste texture - put this in a bowl and place it in the fridge.

Put the bone and trimmings, plus all the other jelly ingredients - except the salt - into a pan (you may need to break the bone in half before it will fit - to do this, carefully saw a notch in the bone with a serrated knife, put it on a chopping board on a secure surface, or put the board on the floor, and lean on the bone with the heel of your hand).

Bring to the boil, cover then leave it gently simmering for at least an hour, ideally two, meanwhile...

Put the water in a pan and bring it to the boil, remove from the heat and add the duck fat, stirring until it is melted. Pour this onto the flour and salt in a large bowl and stir together with a knife (or a hand mixer with spiral dough hooks).

Once it forms a coherent dough, turn it out onto a floured surface and knead it a little until it turns slightly glossy.

Divide the pastry into three equal pieces, then cut off and reserve a quarter of each of these - roll the bigger piece of each into a circle and use it to line a dish . Leave about 2cm (half an inch) of pastry hanging over the lip of the dishes.

Divide the meat mixture into three equal portions and shape it roughly to fit the inside of the pie cases, press it down in place to make it fit well

Roll the remaining quarters of the dough into circles just larger than the top of the dishes - place these on top, then bring the pastry edges up together and crimp them roughly by hand - they don't need to be neat - a rustic look is just fine here.

Make a hole, about the size of your smallest finger, in the centre of the top of each pie - make sure you can see right through it to the meat.

Brush the top of each pie with beaten egg (if you don't have a pastry brush, just use your finger for this).

Put the pie dishes on the baking tray and bake them for 40 minutes in an oven at 150C (300F, Gas Mark 2). after this time, remove them and let them cool for ten minutes - the pastry should have pulled away from the dish and it should be possible to very carefully tip/manhandle the pies out of their dishes and straight onto the tray.

Return them to the oven and bake again for a further hour, until the crust is golden brown and crisp.

Remove from the oven and leave to cool - the pastry will darken a little as it cools and the meat, which had swollen up during cooking, will shrink back inside the pie (this is what we want, as it makes space for the jelly).

After the bones and trimmings have been simmering for at least an hour, pour off the liquid, discard the bones and other bits, return the stock to the pan, add the salt and simmer it until it has reduced to about 200ml (about a third of a pint).

Let the pies cool right down, then pour the reduced stock into the holes in the top, sharing it equally between the three pies.

The pies need to be chilled fully - ideally overnight - before serving and should be served cold. Wrapped or bagged, they'll keep easily for a few days in the fridge.

Serve them cold with a salad, bread and chutney, pickled onions or mustard, or with mashed potatoes and baked beans, or whatever you like really. Enjoy

The pork pie is a veritable British institution - so perhaps I'm taking a bit of a risk by adapting the recipe in this way.

I love pork pies. I really do - but there are some people who, for one reason or another, don't eat pork, and they're missing out on a treat.

So it's primarily for them, not the impassioned pork pie afficionado, that I have created this recipe.

Anatomy of a pork pie

A pork pie normally consists of a substantial chunk of cooked, finely chopped or minced pork (including bacon in some pies), contained within a crisp, rich cylindrical pastry case.

The void between the meat and pastry is filled with a savoury aspic jelly.

Traditionally, pies of this general type (but usually much larger examples) were made as a means of preserving meat in the days before refrigeration - the salt acts to retard the growth of micro-organisms and the sealed crust, filled with jelly, is like a form of canning.

In some cases, the crust would have been made with a great deal more salt and would not have been eaten at all - it was just a container for the preserved meat.

I'm confident I could serve this to anyone who likes pork pies and they would be none the wiser that it contains no pork.

I'm not going to attempt such deceit, because that's not the point - but I'm happy that this is about as good a substitute as can be made - it really is quite remarkably similar to a pork pie - and a good one, at that.

Isn't this a really unhealthy thing to be eating?

There would be something probably quite wrong with eating things like this for every single meal, but I credit the reader with enough common sense to have worked that out already.

It is a lot of salt, but cold meats tend to need it - it will seem bland and underseasoned without it.

And it is a lot of fat, but amongst animal fats, duck and goose fats are amongst the better ones.

I presented one of the pies to the friends I mentioned at the top of this article - their reception was overwhelmingly positive - describing it (amongst much enthused speech) as 'a dream come true'.

A highly satisfactory conclusion for me and, as it turns out, for them too.

Some people have pointed out that this isn't a pork-less pie, it's just a turkey pie.

Not so. This is a pie made deliberately in the style of a pork pie, with spices and flavourings appropriate to pork, not turkey, quite deliberately using part of the turkey that lends itself to the application - the dark meat - turkey pies exist, and they're nice, but they're not like this.