Supermarkets always overstock on luxury foods in preparation for Christmas - and these often command premium prices.

But this often results in a surplus that they need to sell off to make space, or before it goes out of date (see below for what this really means) - so in Early January, there are some great bargains to be had.

For several years now, I've been buying one or more large pieces of cheese, then carefully storing it in my fridge for a whole year.

Last year, I bought three of these 400g truckles of Dorset Cheddar. These are cheeses that have been trimmed of all rind, then sealed in a thick coating of wax.

I usually buy one more than I intend to store - so I can open one and enjoy it in January. This also gives me a chance to subjectively measure the state of maturity at the start of storage.

The original marked price on these was £4, but I got them for 50 pence each - an absolute bargain for 400g of mature cheddar already, but of course most people are looking at this as a product with a short shelf life. Not me.

This photo was taken at the end of a year's storage - I opened and used one cheese - still perfectly intact and delicious.

The wax coating does stabilise the cheese a fair bit - so this cheese didn't ripen as much as perhaps it would have if it had been stored as a whole cheese in its natural rind, but still, the cheese had matured noticeably - the flavour was certainly deeper and much more tangy - and the texture was drier and more crumbly.

Delicious - and well worth the wait. The second of these cheeses has not been opened - I think I may actually store it for another year.

The previous year, I bought and stored something similar, except I was lucky enough to find 800g truckles of cheddar - the results were much the same though - delicious cheese at the outset, outstandingly tasty extra-matured cheese at the end. 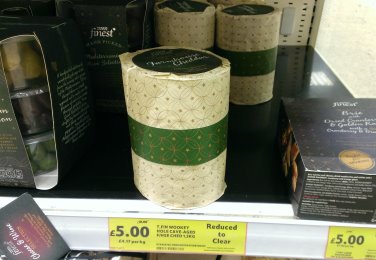 This year, I struck lucky. Although I paid a fiver each for my cheeses (I could have waited for a further reduction, but it would be a gamble that I might lose), these are 1.2 kilo Cheddar cheeses that have been cave-aged at Wookey Hole.

They're entire cheeses (i.e. not cut pieces), in their natural rind, that have just been wrapped in paper. 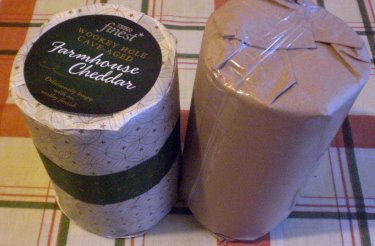 I'm expecting great results from these - as they should breathe and mature much more than would a wax-coated specimen.

So in order to let the cheese breathe, but still protect it from damage, and somewhat control the aroma, I wrapped my cheese in two layers of brown paper (in addition to the waxed paper wrapping it had when I bought it.

The second cheese, as is traditional, will be opened for immediate sampling. 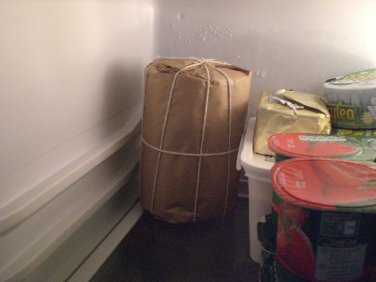 I changed my mind about the wrapping a little and replaced the brown paper with greaseproof, and fixed this in place with string, rather than sticky tape - as it has to last a year.

And there it goes - to the back of the fridge (but not actually touching the cold plate, lest it freeze). Put away for now, but not forgotten.

I opened the second cheese to sample it - and it's a thing of beauty already. The rind was actually covered with cheesecloth, which peeled off without too much trouble. the cloth wasn't immediately evident, as the natural moulds of the rind had grown right through it.

This cheese is quite different from the Dorset Cheddar truckles of previous years - it's drier, sweeter and more crumbly - less tangy and more nutty.

It will indeed be interesting to see what this is like after another year...

Like every other food product in the supermarket, these cheeses had a 'best before' date on them - sometime in January 2014.

But this is absurd. It's cheese. It's already 'gone off' pretty much as far as it's going to. Cheese is by definition a food that is designed to defy notions of storage limits.

I am therefore not the slightest bit worried about defying the advice that this is 'best before 14th January 2014' I rather think it will actually be best after.