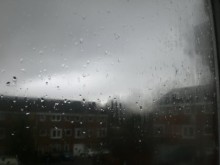 There are recipes already out there for waffles made from batter with embedded bacon pieces, or flavoured with bacon - but I wanted more bacon. 100% bacon. A waffle made from solid bacon. 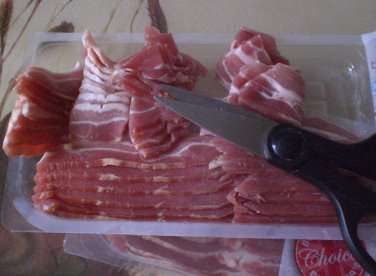 The idea is to form bacon into disc shaped patty, then cook it in an electric waffle iron.

I started with 250g of dry cure smoked streaky bacon - I chose dry cure, because I want to minimise shrinkage, and I don't want too much liquid coming out and leaking everywhere.

I cut the bacon into chunks using sharp kitchen shears. 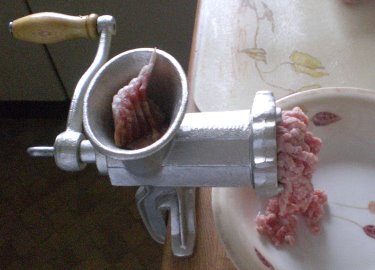 I ran the bacon through my hand-cranked mincer.

It came out quite finely ground and was easy to form together into a ball without anything else added to bind it. 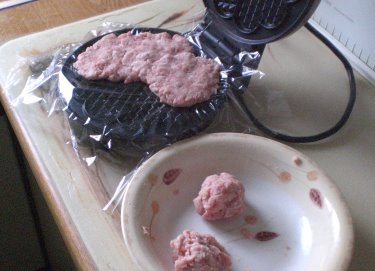 Before switching on the waffle iron, I spread a sheet of plastic film over it and formed the minced bacon into an appropriately shaped and sized patty.

I covered this with another layer of film, removed it from the waffle press and put it on a plate in the fridge.

Then I set about making some regular batter waffles. 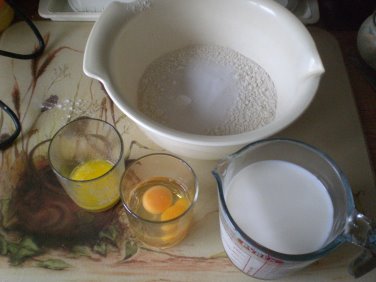 All of these ingredients are mixed together (all at once) in a large bowl and whisked just enough to break up the big lumps - but no longer, or the batter goes stringy and the waffles may lose their lightness. 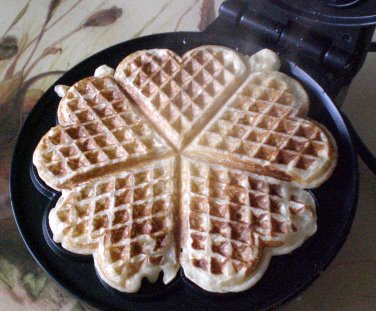 I cooked all of the waffles first - the above recipe makes about 10 of them in this type of waffle iron. 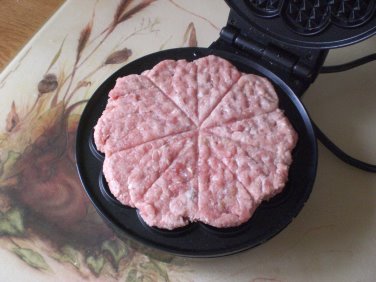 Then it was time to cook the bacon waffle - I retrieved it from the fridge (20 minutes resting in a chilled place had made it hold together very nicely) and removed the film.

It was fairly easy to drop it into place on the hot waffle iron.

I pressed it down hard to ensure the grid pattern was nicely impressed into the meat while it was still soft and pliable. 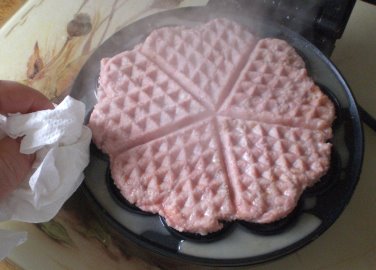 Even though I used a dry cure bacon, there was still a little leaking of juices and brine.

I mopped this away with a piece of absorbent kitchen paper, then closed the press and kept on cooking.

About 5 minutes later, it was fully cooked - obviously this is more like a bacon burger than a rasher, so there's no way to make it completely crisp, but it did brown up nicely, especially at the edges. 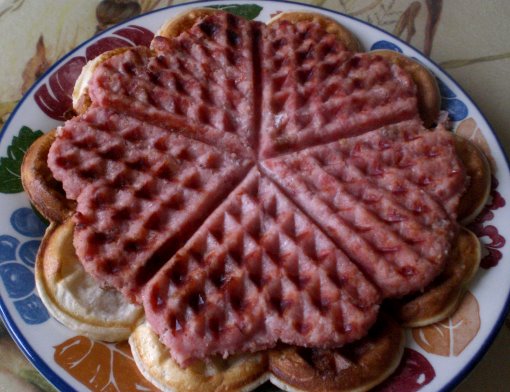 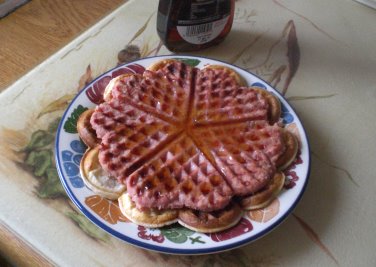 I placed it on top of one of the batter waffles, drenched it with real maple syrup, then put another waffle on top to make a sandwich.

I cut the bacon waffle waffle sandwich up into its five natural, heart-shaped segments. They were delicious! 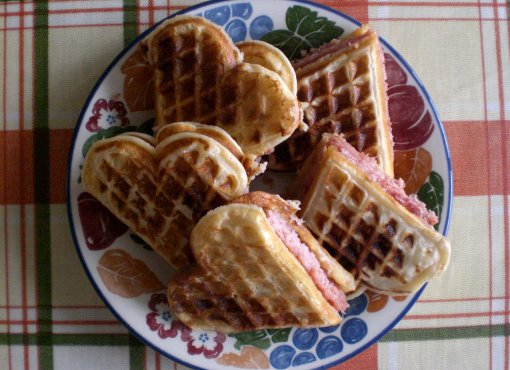 This Is Why We Can't Have Nice Things

This was an interesting experiment, but it did make a horrible mess of my waffle iron. Fortunately, as it's fairly new and the non-stick coating is still in good condition, it was not too difficult to clean it up, but I think repeating this too often would probably destroy the machine before the end of its natural life.

It has become a bit of a habit for me to use things for purposes other than they are intended - my plastic recycling machine is a sandwich toaster, for example. I recently had to turn down the offer of a free chainsaw, because I know I'd abuse it and probably hurt myself.

This is the latest in my bacon series - Click the 'Bacon' tag in the side column to see other bacon-related stuff. If you have an idea for something that should be bacon-ised, please let me know...