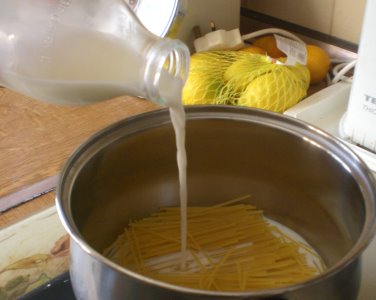 Break the spaghetti strands into short pieces and put them in a pan with the milk and vanilla extract.

Warm to a simmer over a gentle heat, stirring with a fork to ensure that the strands don't stick together (the milk makes this much more likely than when pasta is boiled in water).

Take care not to overheat the pan, as this will burn the milk on the bottom. If it seems to be turning dry or sticky before the pasta is fully soft, add a little water. 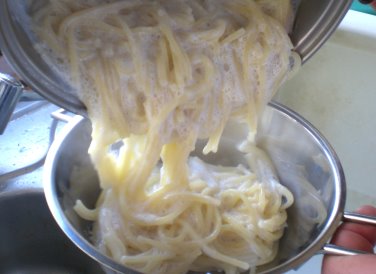 When the pasta is soft, drain it in a colander - but there should be very little residual liquid. 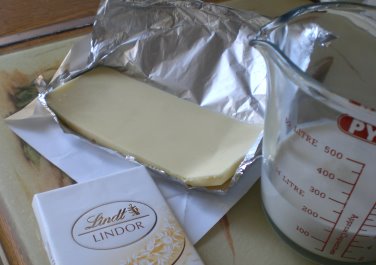 Put the cream and white chocolate in a jug or bowl and warm together in a microwave for 45 seconds.

Remove and stir - return to the microwave for another 30 seconds if there are any large unmelted lumps of chocolate remaining. I used a white chocolate bar with a soft ganache filling, so it melted into the cream very easily. 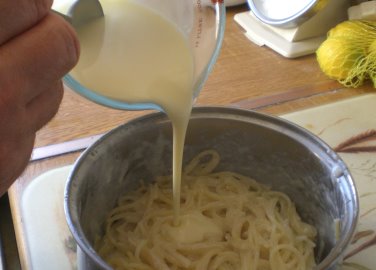 Return the drained pasta to the pan and pour over the white chocolate sauce.

Stir so as to completely coat all of the spaghetti strands with the sauce. 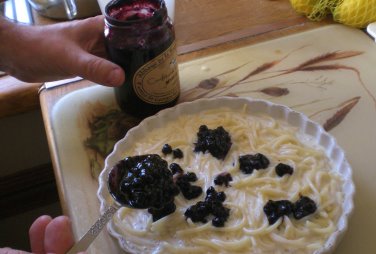 Transfer the mixture to a suitable serving dish.

Spoon over generous blobs of the fruit preserve - stirring it in a little so that the colour combines with the white chocolate sauce. 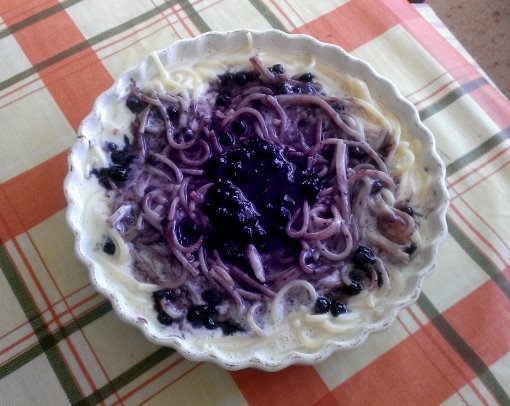 Serve warm, or leave to cool (it will set into a sort of flan that can be cut and served in slices).

The Clangers is a classic British animated children's TV series, featuring the quirky adventures of an adorable family of pink, mouse-like, whistling aliens, living inside a small, cratered moon. In each episode, The Clangers would discover some mysterious machine or object, and would have to solve some kind of problem or challenge.

The series was created and animated by Oliver Postgate (who was also the genius behind many other children's favourites - including Bagpuss).

I'm not exaggerating when I say that this children's programme - The Clangers - has been a formative influence upon me right to this very day. The family friendly, mild mannered absurdity of the exploits of those delightfully weird little pink stop-motion knitted aliens, is a measurable part of the reason that Atomic Shrimp is what it is today.

And so I have wanted for a long time to create a simple recipe to try to recreate one of the Clangers' favourite foods - Blue String Pudding.

This version of Blue String Pudding is a quite deliciously sweet, yet aromatically fruity combination of pasta cooked in milk, bathed in a white chocolate cream sauce, garnished with bilberry compote. 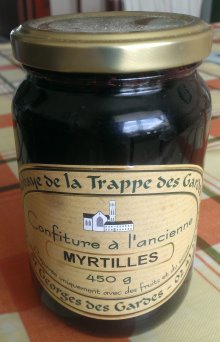 Bilberries are a species of blueberry native to Britain and Northern Europe - if you can't get them, then blueberry jam would do - as long as it's one with a high fruit content.