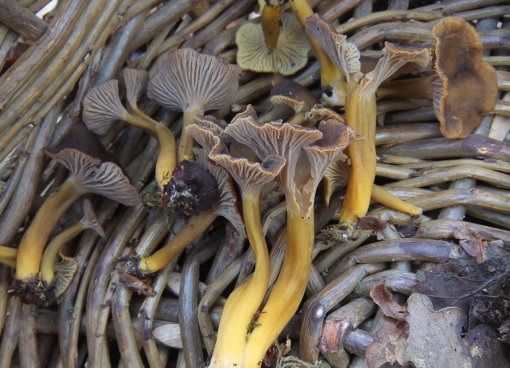 This page was originally posted on 11th November 2014 - updated October 2016 to include the following video detailing these lovely mushrooms - and a recipe for cooking them:

What Are Trumpet Chanterelles?

That turns out to be a less-than-straightforward question - there has been uncertainty whether to place this fungus in the genus Cantharellus (alongside the famous Golden Chanterelle), or in the genus Craterellus (with the less-well-known, but highly regarded Black Trumpet) - recent molecular genetic studies suggest the latter.

Furthermore, there may or may not be several closely related, but distinct species, or they may all be one somewhat-variable species - at the time of writing, the jury is still out on that one, but from the point of view of the forager, it doesn't really matter whether it's called Cantharellus infundibularis, Craterellus tubaeformis, or any combination thereof. 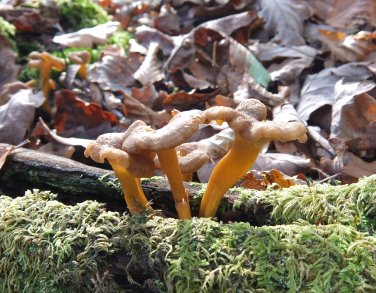 The reason I say it doesn't really matter too much about the precise taxonomy of this fungus (or group of fungi) is that any remaining uncertainty does not impact edibility or ease of recognition.

The fungus has a dull brown cap - not initially easy to see amongst autumn leaves, but this is typically a gregarious organism - so finding a single specimen typically means many more will be found nearby.

The stalk is yellow (another common name for this mushroom is Yellowfoot), hollow inside and often contorted, flattened, ridged and sometimes branched - at the top of the stalk, the transition to the light greyish brown of the gills is quite abrupt. 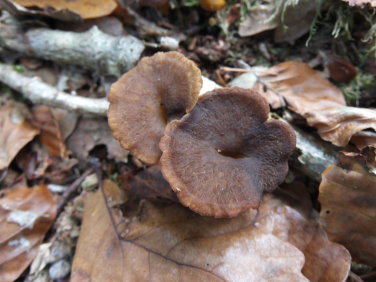 The cap is convex and simple when the fungus is small, but as it matures, it becomes wavy and irregularly funnel-shaped - a hole emerges in the centre, connecting with the hollow centre of the stem.

(It's a good idea to slice the mushrooms in half vertically when preparing them for the table, so that any insects or debris can be brushed out). 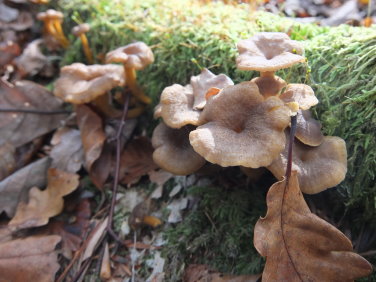 Trumpet Chanterelles are found in deciduous or coniferous woodland, especially near the edges where sunlight can penetrate.

It is described by all my references as a mychorrhizal fungus (growing in symbiotic association with trees), but nearly all of the specimens I found on this trip were growing directly from mossy, decomposing fallen branches or cut tree stumps, so it looks like it may also be saprophytic.

This is an interesting, variable, yet very easily identified fungus - which makes it a promising candidate for my shortlist of mushroom heroes... if only it turns out to be good to eat (actually, there's no doubt about that, as I'm by no means the first to try it). 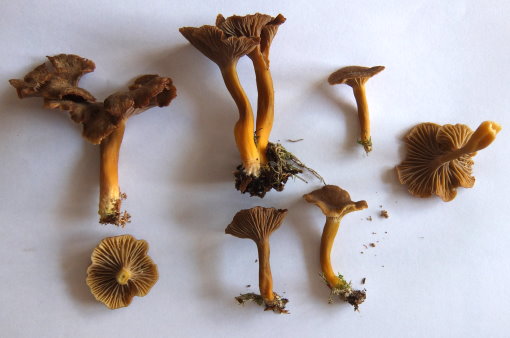 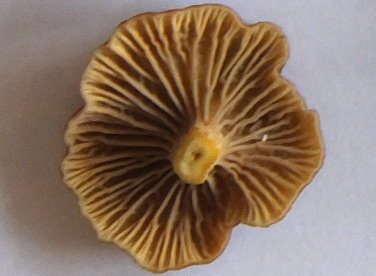 A closer view of the gills reveals them to be not separate structures from the flesh of the cap, but actually, gill-like wrinkles; this is a diagnostic feature of mushrooms in this group - as also is the fact that the gills branch and occasionally rejoin when traced from the stem outwards.

This particular species has gill ridges that cross the main radial patterning - that is, linking adjacent gill ridges - not very easy to photograph, but you can just about make out an example of them at the twelve o'clock position in this photo (amongst others less conspicuously in the same picture).

The gills are yellowish in very young specimens, turning greyish brown and darkening as the fruiting body matures.

When prepared and sliced, the raw mushrooms have a faintly fruity aroma with very subtle hints of a resinous, spicy smell, but this is elusive.

My usual mode of preparation for tasting any new mushroom would be to gently fry it and serve on toast, but I'm getting tired of that tradition, so I decided to cook a few Trumpet Chanterelles and serve them with noodles.

I gently fried the sliced caps of the mushrooms in a little vegetable oil for three minutes while I simmered some ramen noodles (don't judge me!), then I added the drained noodles to the frying pan and tossed them so that they could deglaze and pick up the caramelised juices of the cooked mushrooms.

I only cooked a very small portion of the mushrooms I gathered, as this was a between-meal tasting (I will use the rest later).

This is a delightful culinary mushroom - the texture is pleasant; firm and meaty, but not tough. The flavour is sweet, well-rounded and deeply wild-mushroomy - in short - a very well-performing wild fungus!

This fungus is often described in reference sources as 'locally abundant' - meaning that once you stumble across one specimen or a small group, you will probably be able to find many more close by - especially if you look for other examples of the same precise habitat nearby.

For example, I found the first of these growing on a decaying, mossy log at the edge of an area of mixed beech and conifer woodland - I found others on other moss-covered stumps, logs and banks, along a line parallel with the edge of the wood (the same approximate exposure to filtered light, weather conditions, distance from the water-filled drainage ditch, etc.)

I returned to the same area the following week and picked a whole basket full of these delicious mushrooms - the quantity was only limited by the time available - and our aniticpated capacity to cook and preserve them. 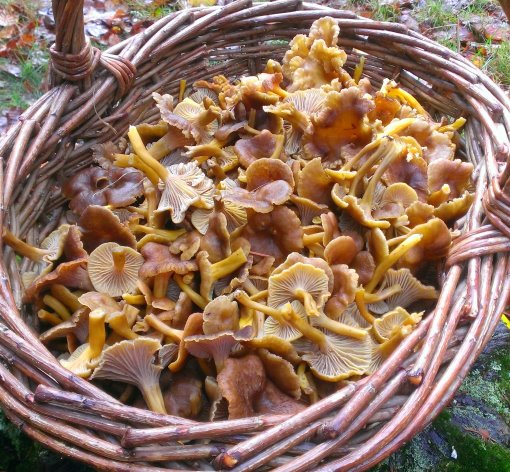 Fortunately, these mushrooms preserve well - they can be halved and dried on wire racks in a warm airy place, or just chopped and cooked down, then packed in their own juices into containers for freezing - these can later be thawed and added to soups, casseroles, risotto, or other savoury dishes.