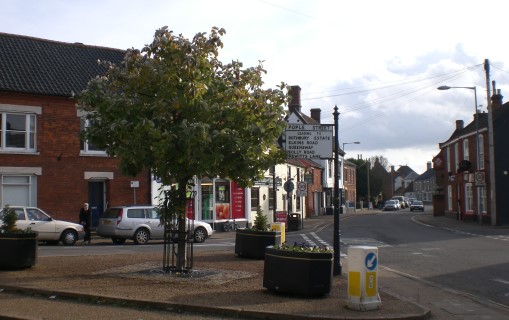 Sorbus ssp:aria - A group of several species of medium-sized tree - closely related to Rowan - with large, stiff leaves which are dark green on top and white and felty underneath. In Common Whitebeam, these leaves are broadly oval in shape. In other species, they may be deeply toothed, almost to the extent of being palm-shaped. 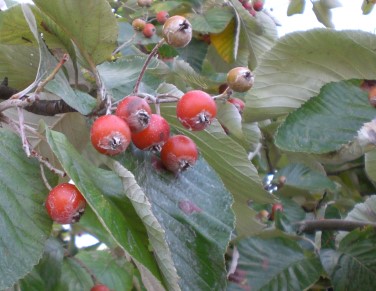 They bear cup-shaped whitish cream flowers in spring, followed by clusters of fruits which are, when unripe, glossy green but are inconspicuous, being covered in a whitish mealy down.

As the fruits ripen, they turn orange-red, then brownish-tan, at the same time as shedding their downy covering, thus revealing their colour.

Although commonly called 'berries', the fruits are in fact pomes - like apples and pears (to which they are related). 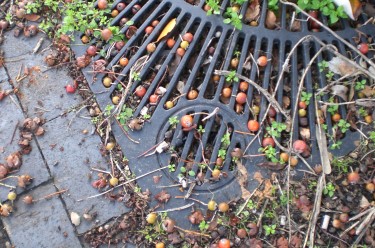 The trees I found were bearing a very heavy crop of fruits, each up to about 2cm in diameter, which is the largest I have seen (these trees are probably a named cultivar or hybrid selected for abundant flower and fruit).

Many fruits had already ripened, fallen to the ground and begun to decompose, but there were plenty more still on the tree.

Although ripe and soft, the ripe fruits are not at all juicy - they're mealy and granular in texture.

Tasted raw at this stage, they're neither sweet nor sour, nor particularly tasty, but they can be 'bletted' (left to ripen until almost rotten) and they will become sweet, moist and aromatic.

Normally, I would be reluctant to pick anything from right beside a road, but this is a fairly quiet street, so there's no great need to worry about contamination from vehicle exhaust - there is no lead in fuels here any more, but heavy traffic can often leave a coating of carbon and oily grime. This was not in evidence here though. 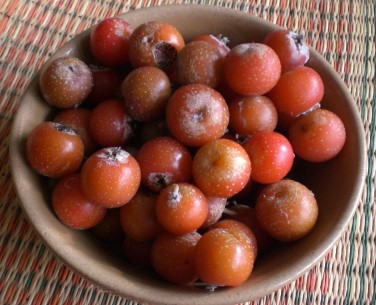 I've never eaten Whitebeam before, so I only picked a small bag of fruits (about 300g), for experimentation.

A local shopkeeper interrupted me, expressing a mixture of concerns that we might pick the lot and deprive the blackbirds of their winter sustenance, or that we were just pointlessly spoiling the tree.

I explained my intent to try eating them and that I was leaving plenty on the tree that were out of my reach, and - well, with a few more raised eyebrows - this seemed OK. I'm not certain he actually believed me.

I stored the fruits for a few days, until I returned back home, then set about making something with them - I didn't have enough of them to use them on their own. I toyed briefly with the idea of mixing them with rosehips, haws and crab apples to make some hedgerow jelly, but I felt this might just obscure their flavour (if they had any) - and as I've never tried them before, I wanted to be able to taste them.

I settled on a plan to mix them with some Bramley apples and make jelly. My ingredients list was:

I chopped the apples and boiled the Whitebeam fruits with them in the water for about 30 minutes, using a potato masher halfway to break everything up and try to extract as much flavour as possible.

Then I strained it through a jelly bag. Confession time: I know you're not meant to, but I squeezed the jelly bag - for two reasons; firstly, because the juice the initially dripped out was cloudy anyway, secondly, because it doubled the extraction - it stopped dripping at about 500ml, but after squeezing, I ended up with a full litre of extract.

I boiled the liquid up with the sugar for about twenty minutes until it reached setting point (the cloudiness turned into foam, which I skimmed off, leaving a clear syrup), then I poured most of it into two sterilised jam jars.

I decided to try something a bit different with the last bit, so I added some finely chopped dried red chillies and poured this into a smaller jar - the chillies initially floated to the surface (as seen in the photo below), but after the jelly had begin to set, I stirred them back in so they can infuse into the jelly.

The resulting jelly is quite pretty - fairly clear (although not to show standard) and pinkish-amber in colour. Initial tasting suggests that this jelly will be slightly astringent to taste, so probably a condiment for meats and cheeses, rather than a spread for toast, but I'll confirm this and update this page in due course. 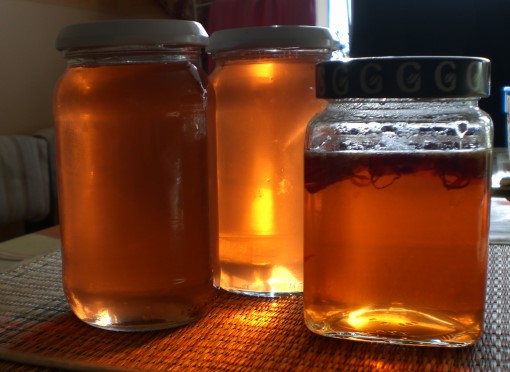 OK, it turns out I was wrong. I tried some of the jelly (which has achieved a perfect set) on a slice of buttered toast - it's pleasantly balanced between fruity, sweet and acidic, but there's none of the astringent bitterness I was half expecting. It's really quite nice.

The flavour of the whitebeam fruits is in there somewhere - it's slightly unusual - maybe a bit pear-like, but it's really quite subtle. 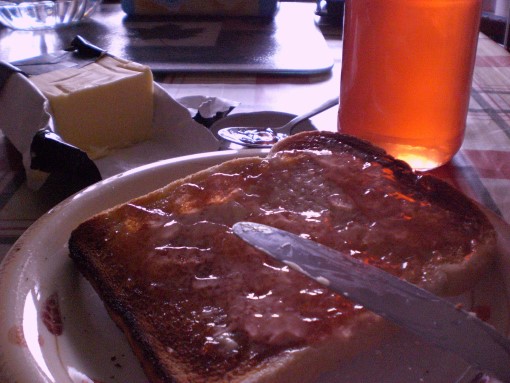 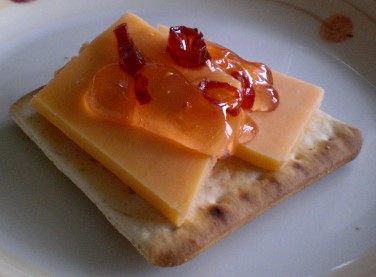 This is delicious - the perfect balance between hot and sweet. Great with cheese and crackers - nice enough to eat just spread on buttered toast.

On a whim, I tried some as a dessert topping on a bowl of ice cream and canned pears - it was fantastic! Strange as it might sound, hot, sweet, sticky chilli jelly with creamy, cold vanilla ice cream really is a wonderful combination.

Here are some of the photos from the process of making the jelly: 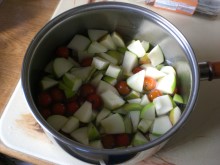 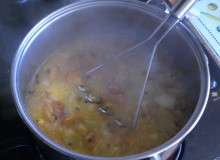 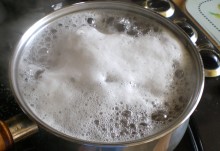 Boiling With The Sugar 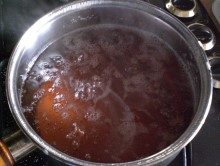 Wow! I noticed your post was in 2010; but thank you very much for your very kind efforts; I'm very interested in ancient foods and Whitebeam is a much neglected classic. Unfortunately living in New Zealand has made it very difficult for me to pursue th

I was thinking about a puree and letting the berries natural Pectin harden toward a kind of cake or fruit leather - just a little bit of water to moisten the berry 'flour'. http://www.polyvore.com/chef_sift_sieve/thing?id=91946958