What Is The Penny Bun?

Boletus edulis - a large mushroom with a whitish stalk and a brown, domed cap (that when mature, really does look a bit like a bun). On the underside, where many other mushrooms have gills, the Penny Bun has sponge-like pores. 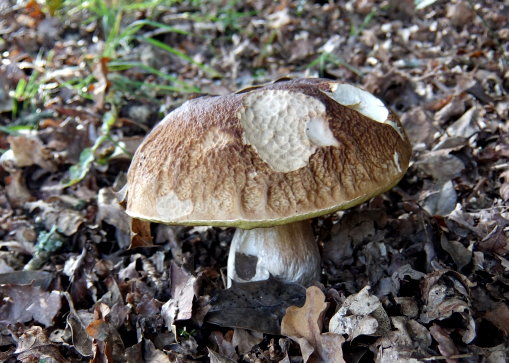 Known in France as Cep, in Italy as Porcini and in Germany as Steinpilz, this fungus is one of the most highly prized culinary species.

Identifying And Picking The Penny Bun 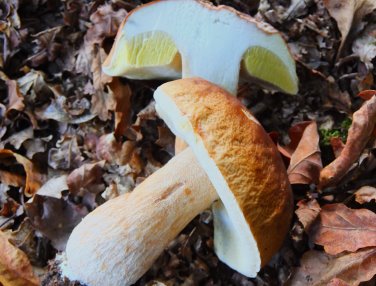 This fungus is a woodland species - it can be found any sort of woodland, including coniferous, but in my experience, it is most commonly found in open mixed deciduous woodland, in close association with oak trees.

It emerges from the ground as a hard, tight little domed mushroom with pale cream or white pores (often with an apparently glossy surface to them). As it develops, the cap becomes broader and thicker and the pores change through yellow, eventually becoming olive green.

The specimen shown here is about medium maturity - the perfect time to pick it - when the flesh and pores are fully developed, but decay hasn't begun. This one is sliced in half to check for infestation by insect larvae - a common problem (see below). 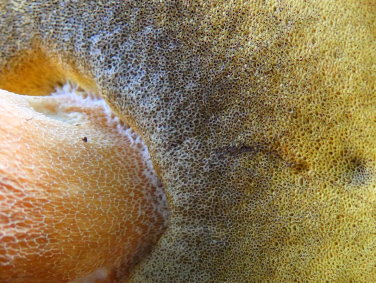 Here's a closer look at the pores and stem of a more mature specimen - note the conspicuous netted pattern on the stalk.

The top surface of the cap is brown (may be deep almost purplish brown in young specimens, or the colour may be obscured and rendered pale by a whitish bloom (see comparative picture further down the page). In dry weather, the cap may feel rubbery and slightly clammy - in wet conditions, it may be slippery.

If any part of the fruiting body turns deep blue/green when pressed, it's not a Cep - it's probably Boletus badius (which is also edible). 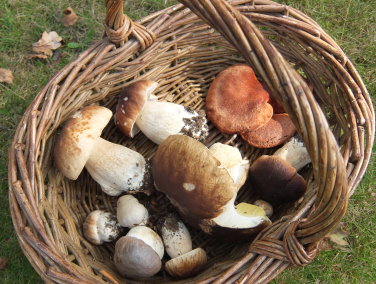 It it's tallish, or has a cracked or velvety cap, or has any traces of red anywhere on the fruiting body, it's one of the many other Boletes - but in all cases, you must positively identify any fungi you gather for the table (the usual warnings and disclaimers apply - see below)

I picked a good basketful of these fantastic mushrooms in the space of a couple of hours, just wandering about in woodland in the New Forest.

(There's also a Beefsteak Fungus in the basket alongside them). 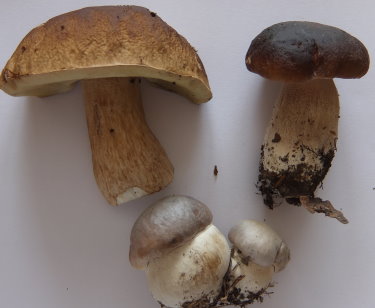 (Clockwise from top left) A mature, typical specimen, a young specimen found amongst undergrowth and a very young pair, showing the pale, bloom-covered cap that can sometimes be evident. 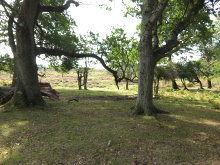 In my experience, the most promising locations for finding this fungus are open, grassy woodland and wood-edges - near to oak trees (and specifically, close to the 'drip line' - that is, a zone encircling the trunk, about the same diameter as the tree's canopy; the place where the canopy tends to shed any rain that falls on it.

Insects love munching on these mushrooms at least as much as humans do, so sometimes, it is disappointingly the case that a perfect-looking Penny Bun will turn out to be riddled with little maggots when sliced open. Of course, it could still be eaten, but the notion of deliberately consuming insect larvae is not aesthetically pleasing.

This problem seems more common in wetter years, so in the dryish early autumn conditions of 2014, I was delighted to be able to collect a good number of highly intact Penny Bun mushrooms. 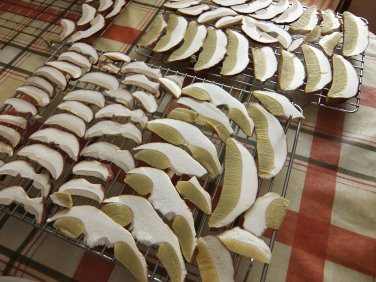 Penny Buns can be cooked from fresh in all manner of mushroom recipes, but I sometimes find the texture a little unpleasant that way - so I decided to dry mine for later use. In fact, drying them intensifies their flavour to the extent that one or two slices, rehydrated, will be sufficient to deeply flavour a whole dish.

I sliced them into thin pieces - discarding any damaged or obviously bug-eaten bits (although these mushrooms were pleasingly bug-free) and spread them out on wire racks to dry,

I left these in front of an open window - a gentle breeze blowing across them helps with initial drying - by evening, they felt dry to the touch on their surfaces (which is important, as mould might have taken hold if they were left in a moist state overnight).

They'll take a few more days at least to dry out completely, after which, I'll store them in an airtight jar, to be used in soups, stocks and other savoury dishes. 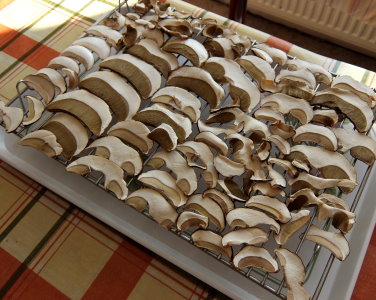 Just 24 hours later, the slices of mushroom have shriveled, shrunk and dried considerably - to the extent that they will now all fit on one wire rack.

They have also developed a conspicuous, deep, musky-mushroomy aroma - really delicious and promising to be a fantastic ingredient for future use. 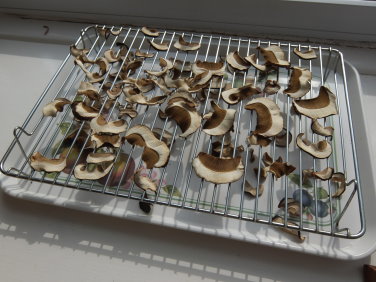 Another 24 hours and the mushroom pieces are now very dry - the thinner slices snap when handled - the thicker slices feel like soft cardboard.

The aroma is now extremely strong - still only intensely mushroomy (in the way we expect dried ceps to be), but almost overpowering in the room. I'll be getting complaints for the family if this goes on much longer - fortunately, it won't, as I think everything will be dry enough to store tomorrow.

It's amazing how much everything has shrunk down though - a basketful of mushrooms has become just a handful of dried pieces. 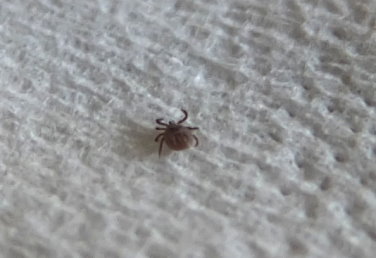 Foraging is not without its risks and costs though - and in this instance, I paid for my ceps with a tick bite. I discovered this deer tick on me about 36 hours after my trip out into the New Forest - I will have to carefully monitor the bite area in case of inflammation, which may indicate infection by Lyme disease.

Oddly, although I was only wearing shorts for my foraging trip, the usual precautionary advice (long trousers tucked into socks) would not have protected me here. I found this tick on the front of my shoulder, just above the armpit - I think it must have crawled up my shirt to get there.