What Is Beefsteak Fungus? 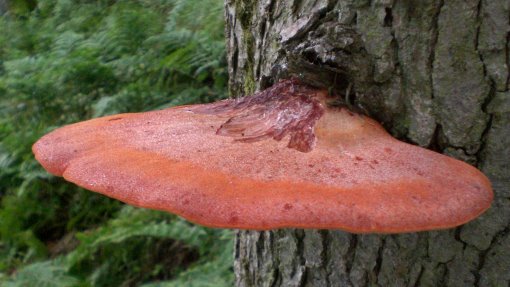 Fistulina hepatica - a fungus forming softly rubbery lobe-like brackets up to 25cm across - predominantly occurring on oak or sweet chestnut in the UK - the brackets are rough and brick red on top; the underside is creamy coloured and composed of many tiny pores.

Said to resemble meat, this is further reinforced by the blood-red liquid that is exuded when the fruiting body is cut or broken.

Edibility is better in younger specimens.

Infection by this parasitic fungus imparts a rich, dark colour to the timber of oak trees - the resulting 'brown oak' is highly prized by woodturners and cabinet makers. 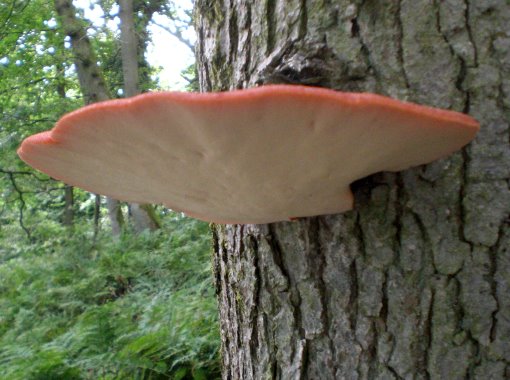 I was delighted to find this fungus, but unfortunately, not quite in a position to be able to sample it as food - for more or less the following reasons:

So... Live and learn - at least I have now learned to identify this fungus unaided - and next time I will be ready...

Opinions are divided on whether this is an excellent edible fungus or a complete waste of time - some people have described Beefsteak Fungus as unbearably sour or tough (I wonder if they picked specimens past their prime), but most of my wild food resources describe this one as good or excellent.

On a foraging walk in the New Forest in September 2014, I found a nice young specimen - and this time, I took it home and cooked it. 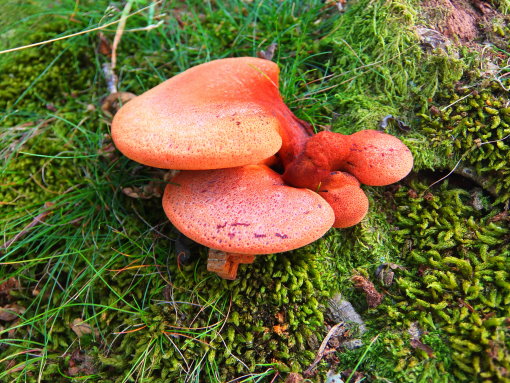 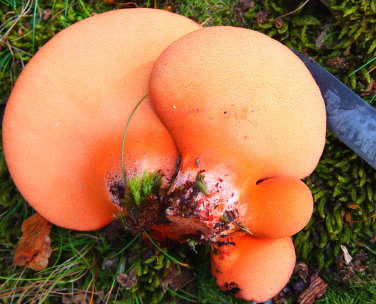 The specimen I found was quite young, comprising a cluster of fruiting bodies at the base of an oak tree.

I cut if free with my pocket knife and it immediately started to exude blood-red liquid from the cut stalk.

The fruiting body is surprisingly heavy and solid-feeling for a mushroom - and it's easy to see why this thing bears such a meaty name - the top surface is red-brown and mottled; the underside is a sort of creamy skin colour - a mass of tiny sponge-like pores. 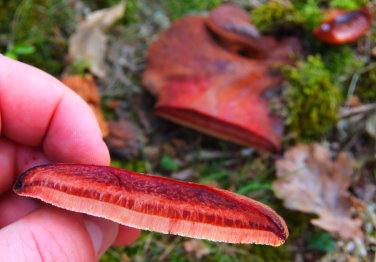 There was also an older specimen growing on the same tree - I sliced a piece off to take a look at it (and to help me absolutely verify the identity of what I was picking).

It really does look like a piece of steak when cut. 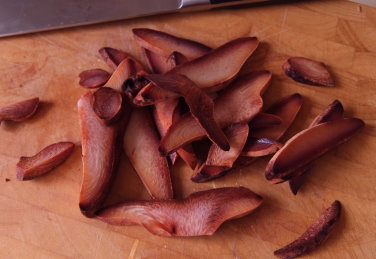 I decided to cook it to a recipe named 'Butter Boiled Beefsteak' - as recommended by Roger Phillips in his book Wild Food. 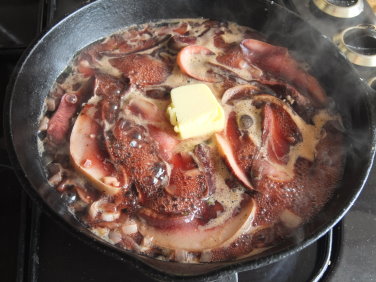 The recipe comprises simmering the sliced fungus with chopped shallots, garlic, thyme and black pepper in a little water, then reducing it down with butter until the liquid thickens almost to a gravy-like consistency.

The appearance and smell were quite promising - mushroomy and mild. I dished it up onto a slice of toast (my go-to serving method for mushrooms, especially if there is juice or sauce to mop up). 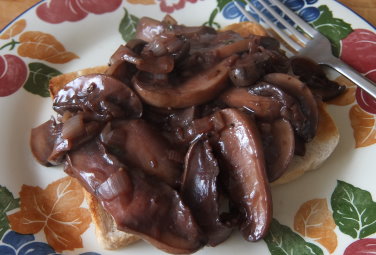 The flavour was OK - not especially distinctive, although there was a tiny trace of bitterness. The texture, I didn't really like - too floppy and gelatinous - and at the same time, oddly crisp and crunchy.

I'm glad I finally got to satisfy my curiosity about this wild food, but it's not one I'll be in a hurry to try again.