I'm not really sure where this idea came from - it could have been forming in my mind at around the same time as I invented the Inside Out Pie.

In this food experiment, we will attempt to make something that is the opposite of meatballs.  That's not a completely straightforward concept, but in this instance, I am interpreting it thus: meat, containing spherical voids (actually, they will be filled with tomato sauce).

Finely chop the onion and fry it gently in a little Olive oil.

When it's just starting to caramelise and show a little colour, add the passata.  Tear the basil into small pieces and add it.

Place over a low heat until it starts to bubble.  Stir and season with salt and pepper to taste. 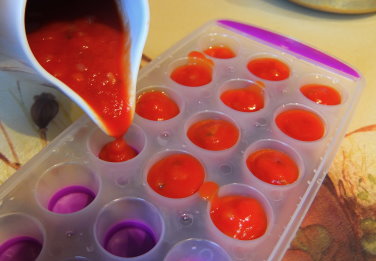 Allow to cool, then pour into an ice cube tray (ideally one designed to make round ice - or else you will end up making anti-meatcubes instead).

Reserve any leftover sauce - this can be reheated to pour over the finished dish.

Place in the freezer overnight. 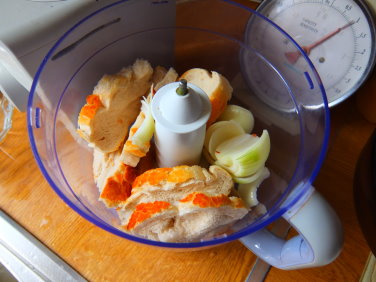 The next day, make the meatball mixture.

(in case you haven't guessed by now, this is really going to be a sort of meatloaf)

Use a food processor to chop the ingredients to a fine texture. 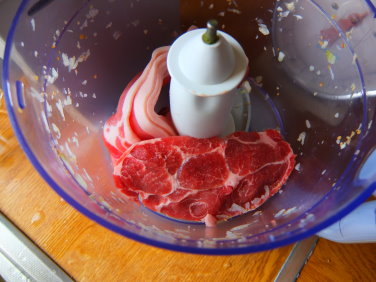 I found it was necessary to process everything in small batches - too much at a time and the processor will just jam up.

Add each batch to a large bowl.  It doesn't really matter what order or combination you add them to the food processor, as it will all need further mixing. 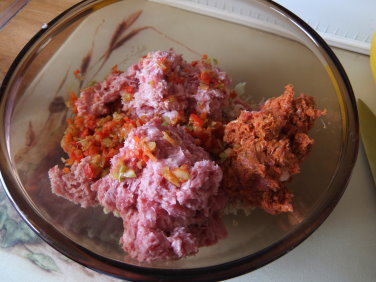 Once all the ingredients are finely chopped, they need to be thoroughly mixed.

There's really only one way to do this - by hand - wash your hands then get in there and knead and squeeze the mixture together until it is evenly mixed.

Divide the mixture up into four equal parts. 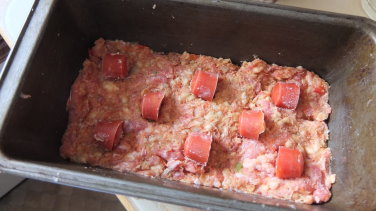 Take one part of the meatloaf mixture and flatten it into the bottom of a standard loaf tin. 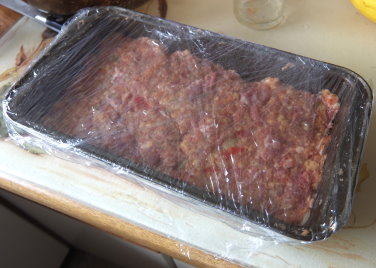 Cover the tin with plastic wrap and place it in the fridge for four hours - this is to allow the frozen sauce pieces to thaw - because otherwise they may prevent small regions of the meat from fully cooking.

Later, remove the plastic wrap and cover with foil; bake in a moderate (170C) oven for an hour, then remove the covering and bake for another half hour. 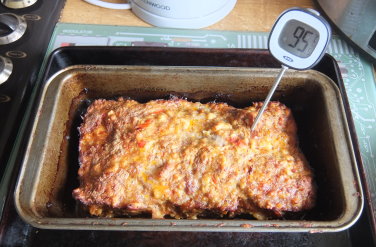 Remove from the oven and allow to rest for 20 minutes.  During this time, it will reabsorb some of the juices that came out during baking - and this will lend a more moist texture.

Resting the meatloaf also allows it to be sliced more cleanly without crumbling - so let's see if the experiment worked... 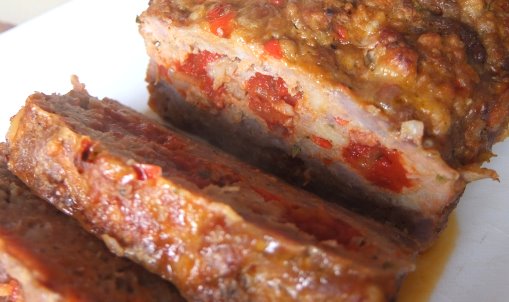 As the meatloaf cooks, it shrinks - and this means that some of the water from the sauce portions soaks in, condensing the tomato into a firmer texture and infusing the meat with flavour and moisture.

I served it with pasta, mixed vegetables, a big fried mushroom and the reheated leftover tomato sauce.  Delicious. 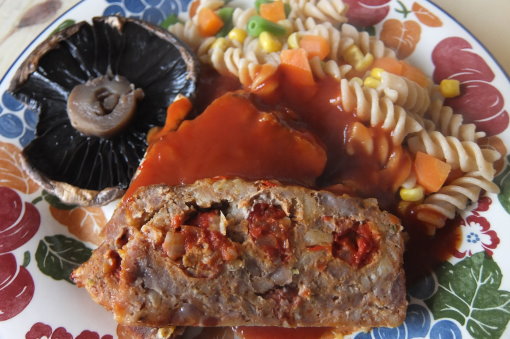